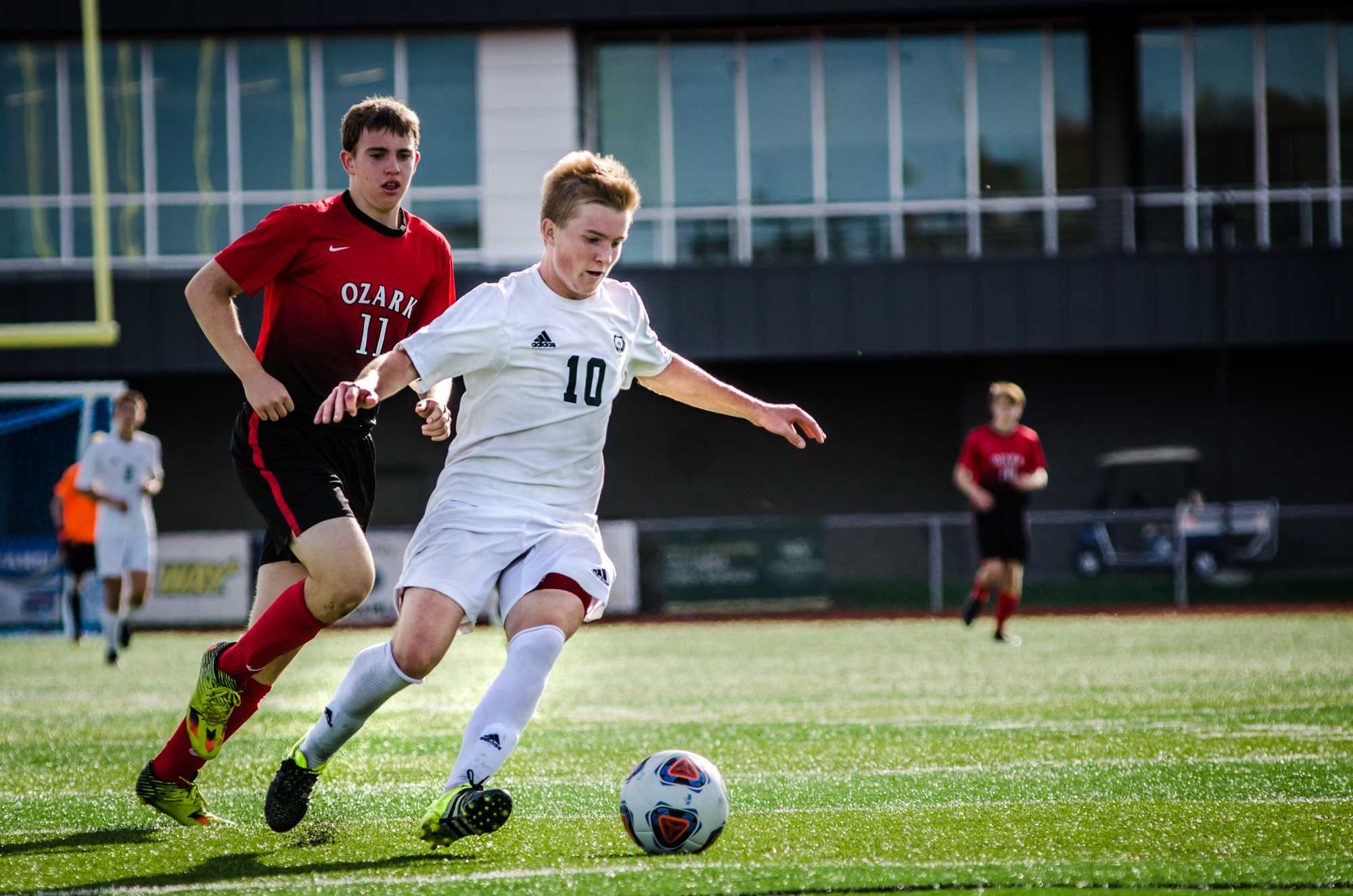 Junior midfielder Johnny Klein dribbles the ball down the field in an attempt to score a goal in the quarterfinal match against Ozark High School Nov. 5. Following their 3-0 win against Ozark High school, Rock Bridge will advance to the state semi-finals against Rockhurst High School on Nov. 11. Photo by Yousuf El-Jayyousi

[dropcap size=”4″]O[/dropcap]ne could say that the RBHS soccer team is a late bloomer. This statement never rang so true as it did in yesterday’s state quarterfinal game against Ozark High School Nov. 5. They took their time to get settled, allowed the defense to handle the ball, and then exploded with offensive ferocity in the second half. The Bruins’ efforts once again led them to a 3-0 victory.

In the game, the Bruins looked calm and collected as though they had been playing this deep in the tournament for years. For head coach Scott Wittenborn, this had always been the plan for success.

“Going into [the] game, we just kept talking about keeping the same route and doing what we do,” Wittenborn said. “We always play our best when we play within our game plan, so I like to think that’s exactly what happened today.”

The Bruins showed off the team’s game plan early and often by possessing the ball for the majority of the game and constantly attacking. The first half saw the Bruins take six shots without finding the net, but in the 32nd minute of the second half, junior Nick Cary capitalized on the tired Ozark defense with a blazing shot from the top of the goalie’s box. Though it may have taken a while, Cary says the team was doing exactly what they needed to.

“Ozark had been playing pretty good defense up to when we first scored but all it took was for them to let up just once,” Cary said. “When they did we just immediately jumped on it and thankfully got it to go in.”

With two more goals on the day from junior Johnny Klein, the Bruins put Wittenborn’s plan into full effect, which will need to continue if they want any chance against nationally-ranked Rockhurst High School in the state championship on Nov. 11. Though the task may be daunting, coach Wittenborn still sees his group as being totally capable.

“Rockhurst is a really great team, one that is extremely well positioned at all times,” Wittenborn said. “Playing them will be extremely tough but beating them is totally possible. We’ve just been building up to the state championship so it never mattered who we played.”

How tough of a challenge do you think Rockhurst will pose for the Bruins? Provide your insight by commenting below.

A lot of the Seniors have been playing together since they were 9. They play really well together and are a great group of guys. They have beaten Rockhurst in the past so they can beat them.

It’s crazy that we made it this far. Wonder how the team will fall back next year. Wonderful article!!

I think if Rock Bridge keeps the same mindset, and keeps playing how their playing right now, I think they’ll have a good chance against Rockhurst.

I agree with Maddie, Rock Bridge definitely has a lot of momentum going for them. I think it will be a real challenge, but that hasn’t seemed to be a problem for the team so far.

Rockhurst is definitely a tough opponent but our team is on fire even under a lot of pressure and I know they can pull through with a win!

Rockhurst definitely won’t be a walk in the park per say, but Rock Bridge Soccer looks is absolutely in their zone right now and I doubt they will give any team a win that doesn’t deserve it. I have complete confidence in the boys soccer team to go all the way!