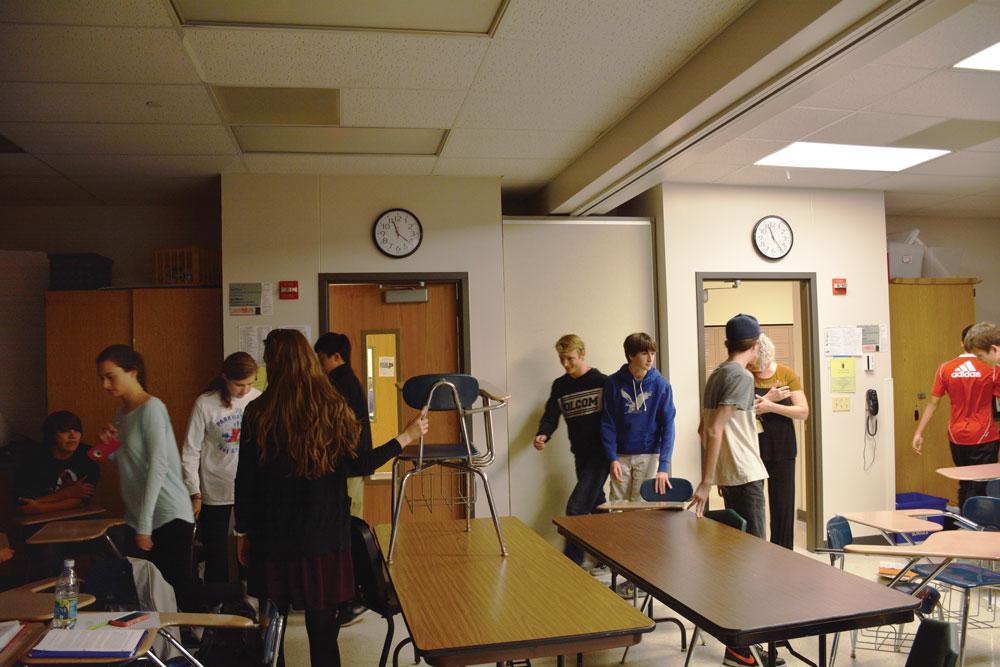 Students prepare to leave the classroom during last year’s ALICE Drill. While these procedures improve student safety, improvements can and should be made to further improve their effectiveness. Photo by Tyson Jamieson

The most annoying sound to go off in a school is the blaring of fire alarms. What makes it worse is knowing there is no fire, and the alarms are ringing because of a drill. Though they are annoying, drills are important and a key factor in student safety for emergencies.

The best way to have student security is to have a strong drill system that uses a well-organized structure and has a sufficient number of each type of drill, but not too many to be excessive and time wasting. Since this is important, RBHS needs to update the number and the manner in which it carries out emergency drills.

A good starting place for bettering the system is through fire drills. RBHS has ten fire drills a year to ensure everyone knows exit routes and what to do in case of a fire. Though fire safety is important, ten times a year is too much considering the National Fire Prevention Association reported there has only been eight deadly fires in schools in the past 100 years, the last one being over 50 years ago.

Instead, RBHS should have eight fire drills during a school year and divvy them into each class so every class practices a fire drill. That way, if a fire did break out, students would know the closest exit from each of their classes. Eight fire drills, however, still takes up too much class time. Because of this, a bomb-threat drill should accompany one of the fire drills.

Currently, RBHS has two bomb-threat drills that work in different ways. In the first one, everyone stays inside the classroom and teachers explain the procedures of handling a bomb-threat situation. In the other, everyone evacuates the building.

Because bomb-threat drills work similar to fire drills, combining the two into one big practice would allow for less classroom distractions and greater efficiency in both drills. Implementing this would be simple, too. Before one of the eight fire drills, teachers would talk about the steps a class would take in a bomb-threat emergency. Then the class would leave the building to their spot, which is the same for both fire and bomb-threat drills.

The last two types of drills are modified lockdowns and ALICE drills. RBHS holds one of each of those drills a year, and though their purpose is similar, the big distinction between the two is how they are executed. In a modified lockdown, class continues as usual, but the doors are locked and hallway access is prohibited. Meanwhile, the setup of an ALICE drill is a simulation where classes have to “escape” from a shooter portrayed by an adult.

Having one modified lockdown a year is good, since it doesn’t require a intricate plan. But there should three ALICE drills a year, not one. The threat of having an active shooter in the building is higher now than in previous years, since, according to EveryTownResearch.org, more school shootings have been happening recently. The school should better prepare its students for an active shooter, which can happen through having more than one ALICE drill a year.

Altering the number of drills to better fit their role in school will increase student preparation and safety for a real-crisis. But to fully ready students, the way drills are carried out should change.

Fires won’t run as smoothly as fire drills, where everyone is calm and walks out the nearest exit. Especially if the fire is blocking the exit. RBHS should conduct fire drills in a similar way to ALICE drills. The school should simulate a fire, or pretend like the fire is in a part of the school and in the way of exit. An administrator should announce where the fire is and students should work to avoid that place as if it were a real fire. This way, students won’t just herd to the nearest exit, but actually strategize and plan ahead for a real crisis.

Adding on to that, there should be a drill conducted during a passing time. Just because class isn’t in session doesn’t mean an incident won’t happen and kids won’t get hurt. Though the idea may seem chaotic, if handled smartly, it won’t be. The first step in this is to inform the student body of the drill and instruct them on how to execute it. Then, during the passing time, an administrator will announce the drill over the intercom and students will do as instructed. Having this type of drill would benefit students because they’d be able to problem solve and figure out how to get out of a situation as it really plays out.

In all, the drill system at RBHS needs to change to increase safety in the school and better prepare kids for a real emergency. But, to ensure that this works, students need to take these drills seriously and learn from them, too. Otherwise drills would be the same as the alarms that come with them, annoying.

This article is very well written and I agree with both sides. However, I do feel like there is a need for all drills. The numbers may seem like a lot but spread out through a whole school year and it isn’t that many. Especially when it comes to intruder drills, although they can be anxiety provoking and scary for some students, it is the sad and terrifying truth that we must face. The more we practice and feel prepared, the calmer we will stay when a crisis of any kind comes up. Although when a crisis occurs, adrenaline and our bodies natural instincts kick in, it is always good to have those skills in place.

I agree with a lot of ideas that this article mentions and explains. I think all the drills should still be used but shouldn’t be practiced as many times as some of them are now. I think the times the intruder drill is practiced especially should be changed because this is now a bigger issue for school then is has ever been.