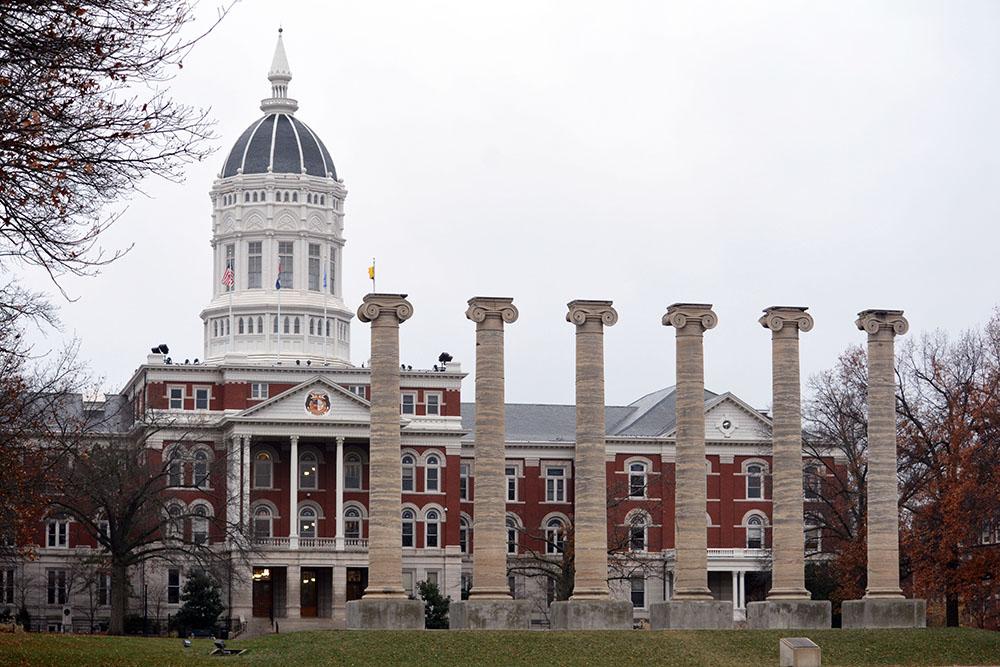 The David R. Francis Quadrangle is the heart and spirit of the University of Missouri – Columbia. Named after the twentieth Missouri governor David R. Francis, the Quadrangle (colloquially known as “The Quad”) serves as the ultimate place for Frisbee games, study sessions, quiet afternoon naps and graduation photos.

Within The Quad are two recognizable features of Mizzou which include Jesse Hall and the iconic columns which once supported Academic Hall.

Built between 1840 and 1843, Academic Hall was Mizzou’s first building on campus. Tragically, it was destroyed by a great conflagration on Saturday, Jan. 9, 1892, completely gutting the building by midnight except for the six columns built of limestone from Hinkson Creek Valley that stand tall to this day.

After the devastating fire, Missouri Legislature led a campaign to relocate the University to Sedalia, Mo.; however, Mayor Francis advocated against the move and fought to keep campus on Columbian ground. Columbia won the rally and in 1921, the Board of Curators named The Quad after Mayor Francis for his devotion and contributions to the rebuilding of the University.

Since 1892, the columns have become a symbol of strength for the University. It has formed the center of The Quad with peripheral buildings that include Hill Hall, Jesse Hall, Lafferre Hall, Residence on The Quad, Donald W. Reynolds Journalism Institute, Swallow Hall and Switzler Hall.

Monuments located on The Quad include the Columns, the original Thomas Jefferson tombstone and the Francis Marker. The Columns are the second most photographed landmark in Mo., next to the Gateway Arch in St. Louis, Mo. The Francis Quadrangle was added to the National Register of Historic Places on December 18, 1973.

Christmas specials to watch this season