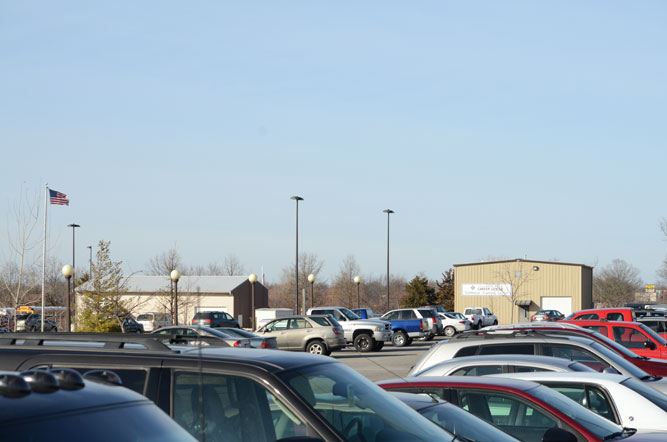 Even though students complain about the parking lots being over-sold, over a hundred spots sit empty everyday. Photo by Maribeth Eiken

[dropcap style=”light” size=”4″]W[/dropcap]hile current students battle with the frustrations and inconveniences of school parking lots, students from decades ago parked their vehicles in much smaller venues.

From 1992 to 2002, some of the most significant changes to the school took place.

“When we opened the Performing Arts Center (PAC) in 1992, we also expanded the south parking lot and added the access to Southampton from the south parking lot,” principal Dr. Jennifer Rukstad said. “When the expansion of the building came, the big expansion in 2000 to 2001 doubled our floor space. We expanded the north lot significantly, so the north lot got wider to the west quite a bit.”

Furthermore, the Columbia Area Career Center (CACC) had continued to expand to the west, which further enlarged the north parking lot, eventually creating the large blacktop that students see today.

“I like the parking lots and the general parking system,” Pate said. “There are always spots available to students, even if they are far from the school. The parking lot and the system gives everybody an opportunity to park, and that is a good thing.”

Administrators implemented new policies with the large construction projects. For example, sophomores were able to park in the school’s parking lot.

“In the 2014 to 2015 school year, [the school] completely opened [the parking lot] to sophomores,” Heaton said. “The reason we did that was, number one, for student safety. We had plenty of parking, anyways, so it made sense to have as many people park in our parking lot.”

The extra parking space was created along with the addition of freshmen. While increasing the school’s population, the individual class sizes decreased by over 100 students, equating to significantly less student drivers, Dr. Rukstad said.

While sophomores using the parking lot doesn’t bother senior JP Schneider, he does think more spots should be made available to students.

The parking spots designated for visitors have always existed, but extra spots were recently added because of the inconveniences that were for created for the visitors by the buses before or after school, assistant principal Brian Gaub said.

Other systems that have been proposed and attempted in regard to parking have been tested, but were unsuccessful.

“We tried doing numbered spots for a few years, and it didn’t really work,” Dr. Rukstad said. “First of all if someone parks in your spot, you have nowhere to go, so it creates this domino effect that creates this really ill-will between kids.”

There were also some prospects of reverting to the initial system in which students parked in the north parking lot, and the south parking lot was designated for faculty, a plan which failed to come to fruition.

“Our building is so large, and our programs have very location-specific things. So if you are a band student and you have to park in the north lot, that doesn’t work for you,” Dr. Rukstad said. “We decided to try to spread the wealth so people can be close to where they do their jobs and where they go to school.”

Another program that is familiar to current RBHS students are the $50 parking permits, a fee that was decided upon by the school’s administration, most of which goes to covering Heaton’s salary, Dr. Rukstad said.

For students who fail to purchase a permit or park in the visitors or faculty areas, Heaton may place the infamous orange stickers on a vehicle. Generally, however, students and staff properly adhere to the guidelines of the parking lots.

“All of our faculty and students do an excellent job,” Heaton said. “The students are really good about parking where they are supposed to and telling me [if something’s wrong]. Our student body does an excellent job of being good citizens so we are grateful for that.”

Are you happy with how the parking lots are today? Let us know below.

Unfamiliar dialect should not warrant criticism