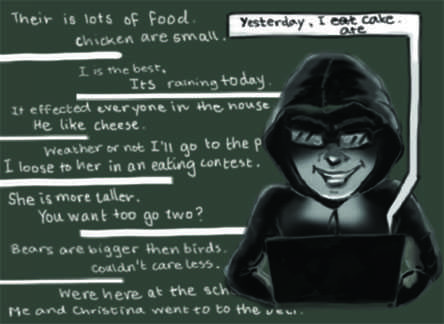 Prejudice is hard to track down. There are some obvious ways that it is manifested, such as violence or racially charged remarks. But in day-to-day life, it is far more nuanced. Discrimination comes in sideways glances or in small judgments. These judgments are based on what people wear, what they eat and even what they say and not even from inherently inflammatory speech. But something as simple as the use of the habitual “be” can send a judgmental language purist over the edge.

Many English speakers are quick to decide what English is correct or isn’t. The “right” way to speak English is what is taught in schools and what appears in literature. Some see the use of language that differs with the rules of conventional English as inappropriate at best, and idiotic at worst.

There is nothing stupid about any non-standardized English dialect. African-American vernacular English (AAVE) faces a mountain of intolerance, even though the consensus among linguists is that it is standardized dialect. AAVE follows its own distinct rules of grammar and carries its own illustrious history. Other widely used and standardized languages such as Russian, Arabic, and Mandarin use features like an omitted copula and double negatives as an intensifier. No one would call the entire language of Mandarin Chinese incorrect, so why is AAVE considered so deplorable by some English speakers?

Sadly, it goes back to racism. Some assume that those without the same educational and cultural background as they are simply less intelligent, and when people of different skin color speak in a seemingly uneducated manner, they become easier to judge. England and America, the greatest strongholds of English, hold a past marred by racism and colonialism. This intrinsic abuse of minorities has permeated the world as deeply as language conventions.  It has bred judgment on English speakers at home and abroad. This has caused the public  to forget many important voices, like that of Ernest Everett Just, who conducted revolutionary biological research.

But native speakers even scorn those who have chosen to learn another language. When a person takes up English as a second language, it is no easy task. The gap between two structurally different languages, like Korean and English, is bridged with something called a pidgin language. Like AAVE, the rules of these languages are very consistent, they’re just different from standard English. Despite how hard non-native English speakers work to learn the language, they are still told their speech is broken and bad.

These judgments do no good for any English speaker. They do not maintain any language “purity.” English itself is a tongue from many unrelated backgrounds. If someone were to only want to use words of Anglo-Saxon or Latin origin, their vocabulary would be cut in half. Thus, it must be acknowledged that the hate that nonstandard dialects face is just plain discrimination against the people who speak them.

This discrimination stops the spread of ideas. Every person has something to add to a greater global conversation, and it doesn’t matter how they say it. For the English speaking world to continue to prosper, the idea of grammar purity must be discarded. When all English is appreciated, all speakers can flourish.

School parking lots shift through changes in past years