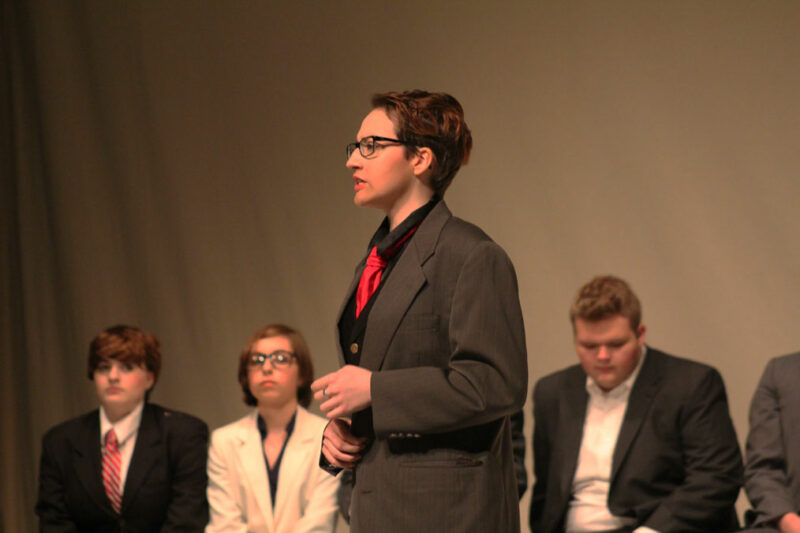 Sophomore Bailey Long leads the trial as an attorney in the performance of "Execution of Justice." Photo by Camille McManus
[box title=”Show dates” box_color=”#ff0000″]Thursday, Feb. 23 Friday, Feb. 24 Saturday, Feb. 25[/box] At 7 p.m. today, students debut the all-school play. Tickets cost $6, $4 with a student ID, and free with an activities pass.

The production, called Execution of Justice centers social aspects of the gay community in the ‘70s. Told through the courtroom process of a cold-hearted murder case, the play, drama teacher Holly Kerns explains, incorporates both an engrossing storyline and a powerful message.

“The play explores the trial of Dan White, who assassinated Harvey Milk, the first elected gay official. Since it is a trial, the play is formal in nature, but very free form in that it moves between witnesses freely, with voices overlapping to explore the cultural climate in the ‘70s, towards what it means to be gay and open about it,” Kerns said. “I really wanted to do a social justice play and look at humans struggling to accomplish something difficult, and this play definitely accomplishes that.”

Sophomore Bailey Long plays Douglas Schmidt, defense attorney, in the show. Identical to an actual defense attorney in a real-life courtroom, Long performs many monologues throughout the show. This means she not only has countless lines to memorize, but also many opportunities to show off her acting skills, which, she said, she’s worked really hard on.

“I looked up what [Schmidt] looked like and I have been looking up what hand gestures lawyers do and I’ve been working with Kerns to see what I should do for this character. [We’re trying] to get across the true story because this all actually happened, and I want to be like [Schmidt] as much as possible,” Long said. “It’s a social justice play, and it’s something that we haven’t really done at RBHS before. I really want it to be good.”

Differing from Long, sophomore Ashley Livingston has three different parts in the play, switching from character to character through the acts. As tiring as that may seem, Livingston is happy with the opportunity and ready to perform.

“I’m Juror #2, Gwenn and Dr. Delman, who’s a psychiatrist. It’s been really fun preparing and learning more about acting. This is my first play so it’s been a new experience,” Livingston said. “[I’m most anticipating] the show and I’m excited to see how it all comes together. We have a very devoted cast and crew and I can’t wait to showcase all our hard work.”

Like the actors are, people going to see the play should be excited, Kerns said. Though it takes place four decades ago, it feels current and it’s something audiences of all ages will enjoy.

“People should go see this because it is unique as a visual experience and because it looks at how we are all shaped by both the media and by events, but we can choose how we participate,” Kerns said. “I think this play shows how history is made, one voice at a time.”

Which night did you attend? What did you think?