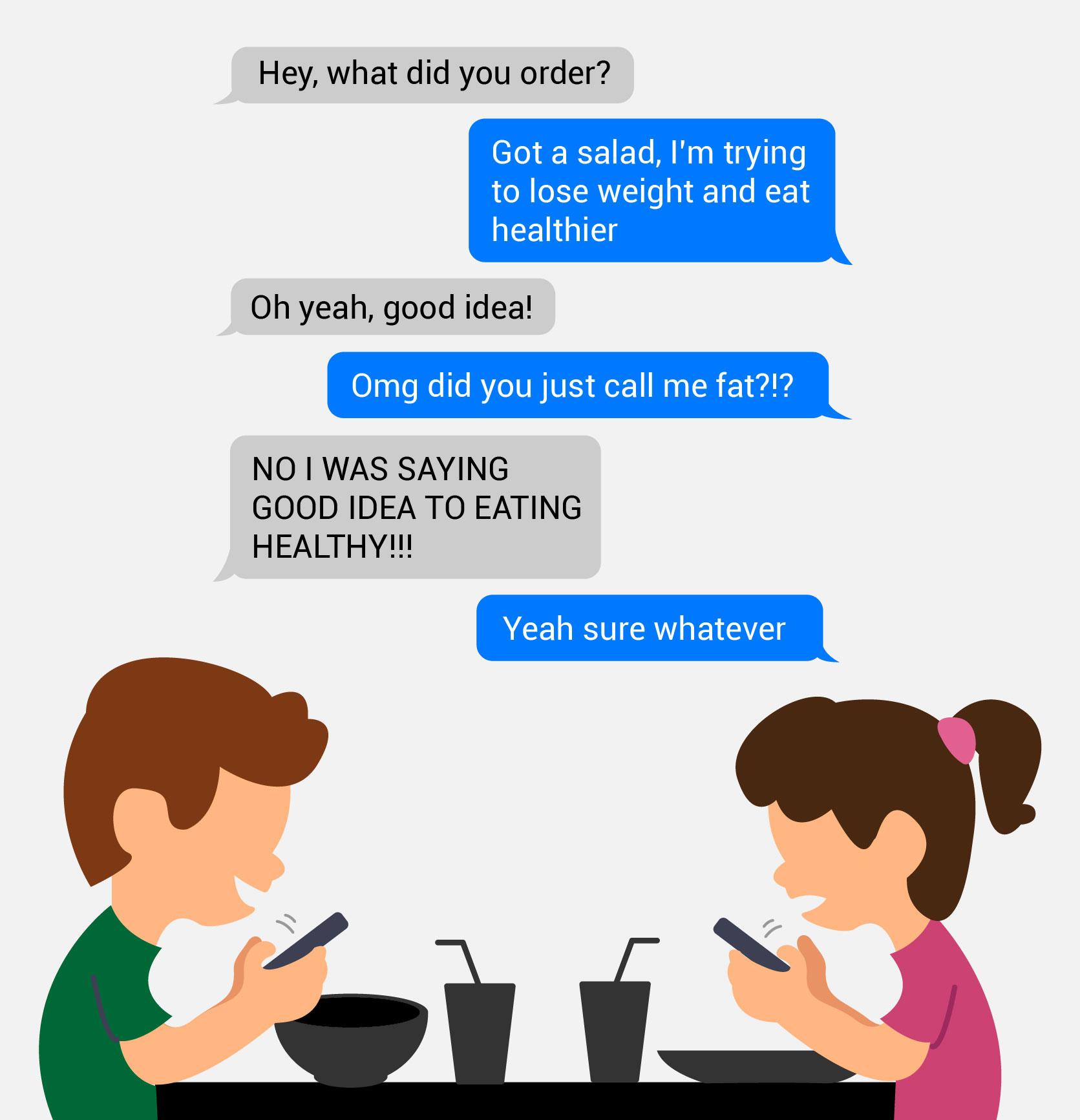 [dropcap style=”light” size=”4″]S [/dropcap]tudents walk down the school halls looking at their phones, constantly checking Twitter, Instagram and Snapchatting their classmates. Some like pictures of couples posing with their arms around each other; others message their significant others telling them about their day.

Teenagers are instantly connected to friends and partners through social media and text messaging. According to the U.S. Department of Health and Human services, 94 percent of teen with a phone go online daily, while 71 percent of teens use multiple social media sites, with Instagram, Facebook and Snapchat being the most popular.

Although not a teenager, Dr. Niklas Myhr is a social media professor at Chapman University.  Dr. Myhr said while technology can be beneficial and harmful, it is how someone is using their phones that affects relationships between people.

Becoming friends with someone can sometimes lead to conflicts. Sophomore Kynsee Fennel has been able to get closer and start a friendship with someone over text. Fennel met Hickman High School junior Ben Jost through social media. Although Fennel is getting to know him better, he has had some misunderstandings over the tone of the message.

“I’m a pretty sarcastic person, so sometimes he doesn’t understand my sarcasm, so he sometimes takes things offensively,” Fennel said. “I have to go in and explain I was saying things sarcastically, and I wasn’t really being mean. It just kind of gets confusing, and then we both kind of get frustrated with each other, so it’s kind of been weird arguments. Many, many tiny arguments have occurred.”

Without talking face-to-face with a person, tone is difficult to understand for many people. The American Psychology Association conducted a study asking participants to email 10 sentences to a person. The statements were a mix of serious and sarcastic. The recipients were only able to correctly identify the right tone of the message 56 percent of the time.

Senior Abby Blitz has run into the same problem with comprehending what her boyfriend, senior Ryan Imhoff, is trying to convey.

[quote]“Misinterpretation is always a problem with text messages,” Blitz said. “After texting Ryan for so long I can always just read them in his voice, so there are a lot of less misinterpretations now than there were when I first started talking to him.”[/quote]

Although conflicts can be the result of conversations through technology, cell phones can also make everyday life easier. The Pew Research Center conducted a survey with 2,254 people, 65 percent said that cell phones made their lives easier. In the survey people said phones lightened the burden of life by making it easier to stay connected to loved ones, plan one’s day and be productive while waiting in a line or in traffic.

“I don’t necessarily feel more connected [with him] because of technology or social media, but it’s a lot easier to communicate and make plans,” Blitz said. “Plus, sending each other tweets and snapchats is always fun.”

Cell phones are not only bringing friends closer together, but they are also tightening other relationships.  A Pew Research Center report noted that out of 2,252 people, 70 percent of couples use their phone to contact their significant other, and 42 percent of parents do the same with their children. When researchers asked the participants if technology improves the quality of those they live with, 47 percent said it did.

Technology affect people’s live both inside and outside their homes. Fennel has not met Jost in person yet but through texting has been able to get to know him well. But Fennel wants to make sure his personality in real life is the same as it is in text before their friendship becomes more personal.

“Sometimes in person you’re kind of embarrassed to ask the personal questions to really get to know the person,” Fennel said. “But over text if you get embarrassed, you can just stop responding and you don’t have to look at the person face to face.

How do you use technology in your daily life? Tell us in the comments below.

My way of Social Media is I have a fanpage of Kaelyn on SevenSuperGirls. If you don’t what SevenSuperGirls is, it is a youtube channel with over 6 million subscribers in which a group of girls make videos about skits and challenges, one girl per day with a weekly theme. One of them is Kaelyn. I use the videos to make edits for her and post them to social media. I also post deleted pictures of her and some facts about her on there. The account is @dreamkaelyn on Twitter and Instagram if you would like to follow it.