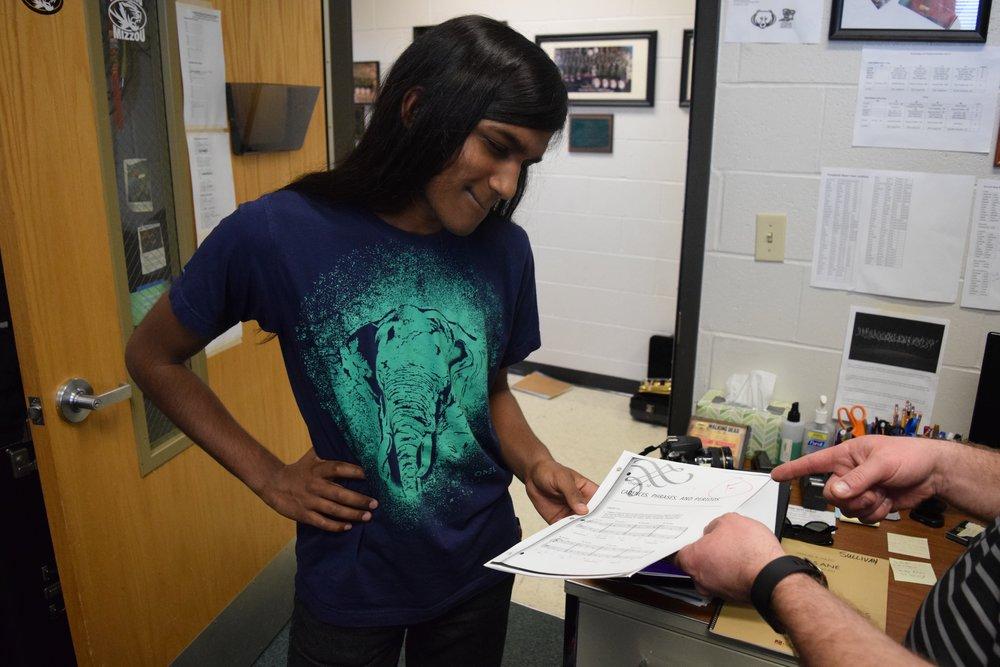 [dropcap]A[/dropcap]lthough a straight A report card may bring pride to students and parents, most kids know it comes with hours of homework, studying and reviewing.  As faculty constantly teaches new materials, the hard working habits of students are shown through grades.

But sometimes, students just expect high grades.  They may think that when concepts in class become tricky to understand, grades won’t show their confusion.  Then, when percentages drop, students complain, rather than seek help.  In the case of a 2012 study, educational psychologist Allison M. Ryan of the University of Michigan found that as children get older, they became less likely to ask classmates for help.  Instead, students will settle with another route like copying homework.

“I get several students every semester asking me to bump up their grade.  But usually those students have not come in for help prior to any assessment. If these students had come in for help, they would have scored better on those assessments,” math teacher Travis Martin said. “Students sometimes complain about a test because they are hoping that the test will be curved if enough students complain. The reality is that instead of complaining and trying to place the blame on someone else, students would be better served by changing their habits.  [They should] seek help in advance so that they have something to celebrate after a test instead of something to complain about.”

Martin believes some students take advantage of their teachers in hopes of improving grades, and ignore the extra effort they need to put in.  But junior Caroline Stevens has come to terms with that fact that if she wants to see improvement, she will need to seek help on her own.

“It’s so often that I don’t understand concepts,” Stevens said.  “Now its habitual that I just started to accept that I could use a little bit of help.  Every time you review it, it gets better.”

Though Stevens finds it a natural habit to get help, freshman Alexis Walker thinks that getting help can sometimes be more fearful than a low grade itself.

“[Students] are scared of looking dumb. They don’t want to be the only one that doesn’t understand, Walker said.  “In reality, usually if they don’t understand, someone else doesn’t either.  Usually if I’m in that situation, I just talk with other students and we figure it out. That way you aren’t broadcasting that you don’t understand.”

Whether students are coming in for help or not, Stevens believes when it’s needed, students should take the opportunity to get the extra practice and clarification.  But at the same time, she understands the struggle that comes along with trying to improve their grades.

[quote]“Students these days are really stubborn.  We like to procrastinate,” Stevens said. “Why learn it now if we can just learn it right before the test? Sometimes it’s hard to accept that you can’t help yourself anymore and you need someone or something else.”[/quote]

More than just lacking motivation to put in extra work, Stevens feels as though teachers have an impact on which students seek help.  For her, it’s teachers such as Martin, who say it’s okay to say “I don’t know.” Although Stevens admits in previous years she’s been scared to get help, she believes being comfortable with a teacher makes it easy to understand that getting help is perfectly fine.

Martin says he makes it easy for students to want to improve and is frustrated when students aren’t taking the initiative to admit they don’t understand a topic.

“Students who come in for help are generally trying to understand so that they know in time for an assessment; they are being proactive. The other students are asking for the teacher to bail them out of a bad grade; they are being reactive,” Martin said.  Students need to realize the consequences of their actions. If you do not come in for help, do not blame the hard working teacher.  Blame yourself for not doing what you needed to do and make changes to your study habits for future assessments.  You should not let anything hold you back.  You are in control of your actions and your learning, so make yourself proud and work hard.”

Do you often get help or do push your hard classes aside? Let us know in the comments below.

Student View: Why do we have Black History Month?