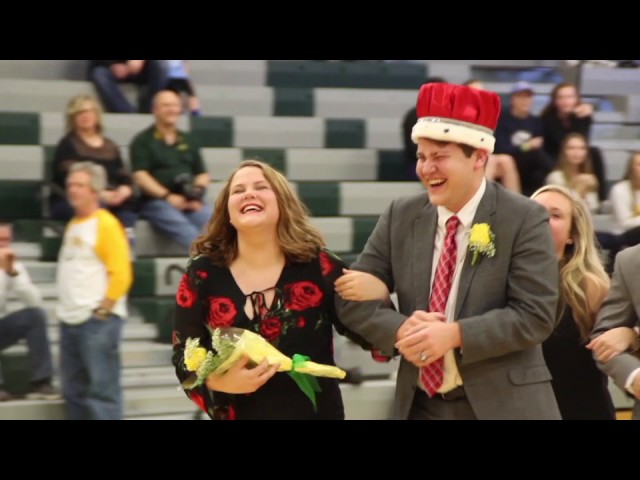 Student Council determined on Monday that the original list of courtwarming candidates had to be amended because of suspected fraudulent voting.

Wittenborn said she and Media Center Specialist Dennis Murphy, as well as Student Council officers, discovered there were roughly 50 to 60 fraudulent votes cast.

“What we did [Monday] morning, I had Mr. Murphy remove all of the votes that came from the invalid IP address and then we recalculated,” Wittenborn said, which “produced a fairly different top 10. When I had all of that information, I went to Mr. [Activities Director David] Egan, and we, together, made the decision that for the honor and transparency of the system, we had to go forward with the new list.”

Even before the end of the school day Friday, students questioned the validity of the list, Wittenborn said.

“There was kind of a pretty aggressive kickback from the student body and a lot of pretty substantial rumors circulating about there [being] … boys who manipulated, hacked and overrode [the system,]” she said. “More or less, they manipulated the data.”

Wittenborn explained that rumors typically circulate during elections, but this situation was substantial enough to draw more investigation.

Of the original 11 names announced Friday, five remain in the group that will participate in courtwarming activities next week. Five other senior boys are now on the list.

“With the previous list, we had a tie of 11,” she said. “Six were removed and five were added. So the new names are Ji-Ho Lee, Vishal Patel, Chase Ford, Carlo Montano and Jack Allen.”

Allen found out because someone brought him a note to come to a meeting after school Monday, he said.

“I showed up to the room, and then they talked about the whole situation with the messed up system, and I found out I was on the new list,” he said. “I was happy. Just to know I was voted by my peers is a good feeling to have.”

The meeting included the 11 boys from the initial list as well as those five on the new list that Student Council released Monday. Senior Ben Howser, one student who said he participated in the fraud, was on the original list but not at the meeting.

“We wanted to prank everyone and put all 10 of our friends in the top 10 court. I got everyone’s student numbers who [could vote] and then we hacked into the computer, and I made a bot, [a software that runs automated tasks] that voted for all 10 of my friends with those student numbers and fake generated names,” Howser said. “I did that and ran it, then my friends got nominated for top 30. People were suspicious because we let it slip — pretty much everyone knows that I did that instead of voting legitimately.”

Principal Dr. Jennifer Rukstad, who was out of school Monday, said she wasn’t aware of the problem until she saw Student Council’s statement on Monday night. While she said there is no policy on discipline for this situation, administrators use restorative practices as a guideline.

[quote cite=”Ben Howser, senior”]This was a senior prank. That’s what it was. It kind of worked because … not all, but most of Student Council was upset.[/quote]

“Our practice is to support student activities in a way that things remain fair as intended. Once I have an opportunity to understand what happened and who did it, we’ll make some decisions,” Dr. Rukstad said. “We don’t have a policy. We start with a positive predisposition, and we deal with things as they come.”

Dr. Rukstad said some “conversations would have to happen” with those involved and those who were harmed. Considering the methods used to change the results, Howser said he could have made the prank less conspicuous.

“There was a lot more votes than there should have been for us, so they knew something was up. You could tell if you looked at all of them, like 20, 30, 40 more than anyone else,” Howser said. “There was a sheet there that you’d have to sign off [on]. That’s where we kind of messed things up because the sheet didn’t check out with however many votes there was for all of us, we just had to highlight them. That was a pretty big mistake that we did.”

Howser said he did it as part of a senior prank, which he states is “worth it” despite knowing there could be further disciplinary action besides being removed from court.

“This was a senior prank. That’s what it was. It kind of worked,” he said, “because … not all, but most of Student Council was upset [along with some of the administration], and I think it’s pretty funny.”

Though Wittenborn said senior pranks are an integral part of senior culture, she urges the individuals involved to understand that their actions impact more than themselves.

“I think if that was [Howser’s] senior prank, then he can be proud of it, but I would still maybe encourage him to apologize. I’m not mad. It was just a hassle to have to deal with all the drama,” Wittenborn said. “The officers and Dalton [Nunamaker] had to work pretty tirelessly all weekend to try to figure it out.”

Nunamaker, the Student Council committee chair for the courtwarming king candidates, ensures king-related activities are successfully run. Amidst the altered results, he worked with Murphy, Wittenborn and other Student Council members to make decisions for the present and future.

“We’re considering using our student IDs that have barcodes on them if we can get the technology,” Nunamaker said. “For now, we are doing paper ballots for king voting next week.”

Student View: What is the importance of the Black Lives Matter movement?