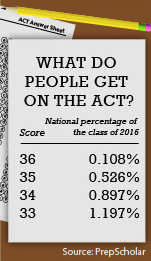 The Department of Elementary and Secondary Education (DESE) believes the free American College Test (ACT) may be discontinued as a result of conflicts between the state House of Representatives and Senate financial allocation decisions based off of Gov. Eric Greitens’ budget proposal. The expected budget leaves the department $4 million short of what DESE initially requested.

Chief budget officer for DESE, Shari LePage, said Gov. Greitens initially recommended a budget that included funding for performance-based assessments, including the ACT. When the decision moved to the House, however, they ruled to take the funding out, leaving the department with a deficit of money for assessments like the free ACT.

On April 11, the Senate appropriations committee countered and proposed adding the funding back in.

“What that means right now is … [the House and Senate] will have to work through that difference,” LePage said. “They usually do that in what’s called a conference committee, and that decision has to be made and approved by the first Friday of May, so May 5 is when the budgets have to be done. Ultimately, they have to agree by hammering out the differences in a conference committee.”

Between the House, the Senate and the governor, the government has to jump through many hoops to approve the budget.

Until that consensus comes, however, LePage said she is unsure if the state will offer the free ACT for juniors in 2018.

EEE supervisor and ACT prep resource Gwen Struchtemeyer said she wasn’t aware of the consideration by Missouri state representatives. She believes it would be a mistake not to offer juniors a free test as it is an influential test on students’ futures and is a ticket into most colleges.

“The ACT is designed to be taken second semester junior year, so we raise juniors’ awareness of taking the test. Also, when our juniors take the ACT, we are [standardizing] ourselves nationally, not just for a test like the end of course tests [where] we’re only norming ourselves within the state,” Struchtemeyer said. “But if we’re comparing ourselves to other ACT scores across other states and just nationally, that’s a better prediction to what degree our students are learning those skills.”

Sophomore Sejoon Jun has been planning his preparation for the ACT since the beginning of the school year and will attend a summer ACT program to help him perform well on the test.

“Since I am considering [going] to prestigious schools, I am looking to score high [on the test], which would require a lot of preparation,” Jun said. “Due to this, I’ve been thinking about the ACT since I’ve started my sophomore year and am going to prepare during summer break.”
Struchtemeyer helps students like Jun who want to be successful on the exam with test-taking tips and techniques tailored to the ACT specifically.

Struchtemeyer also said many of her students rely on or look forward to the no-expense test opportunity — something she said a discontinuation of would hurt a student’s performance.

“You’re going to be much more chipper at 9:30 a.m. on a [Wednesday] than you are at 7:30 a.m. on a Saturday. If you have to take the ACT the Saturday morning after you had to play in a game or act in the theater or do something the night before that was a required school activity, or also just at the end of a long week, [It’s going to be harder to concentrate],” Struchtemeyer said. “I think you could make the argument that Saturday morning is not a great time to take the ACT at all, so I encourage students to make the very most of that free [Wednesday] ACT where we kind of shut down the school and say, ‘OK, we’re going to spend one day and we’re going to test.’”

Since 2014, the state of Missouri has offered high school juniors a free-of-cost ACT exam; however, with the potential budget cuts, rising juniors may not have the chance.
“I am disappointed and devastated that the government decided to [possibly stop offering the free exam] for the ACT in the future,” Jun said. “I’ve always been looking forward to this free opportunity, especially since I will be taking it next year.”

LePage said she understands the financial relief that the free ACT brings to some students. With the free assessment option in past years she’s seen many students take the test that wouldn’t have prior to the free opportunity.

“The funding for the ACT has only been hit for our budget for two years. Prior to that it wasn’t available for all juniors to take at one time, for free, so many students take the ACT, but what they found with this funding short that’s been put in our budget is there’s a lot of kids taking the ACT that may normally not have taken it because of either the cost or the fact that they didn’t think they would do very well,” LePage said. “What we’re finding is a lot of kids are doing well that may not have taken it in the past, so this is giving them an opportunity to potentially go onto college if they so choose, whereas in the past they may have not done that.”