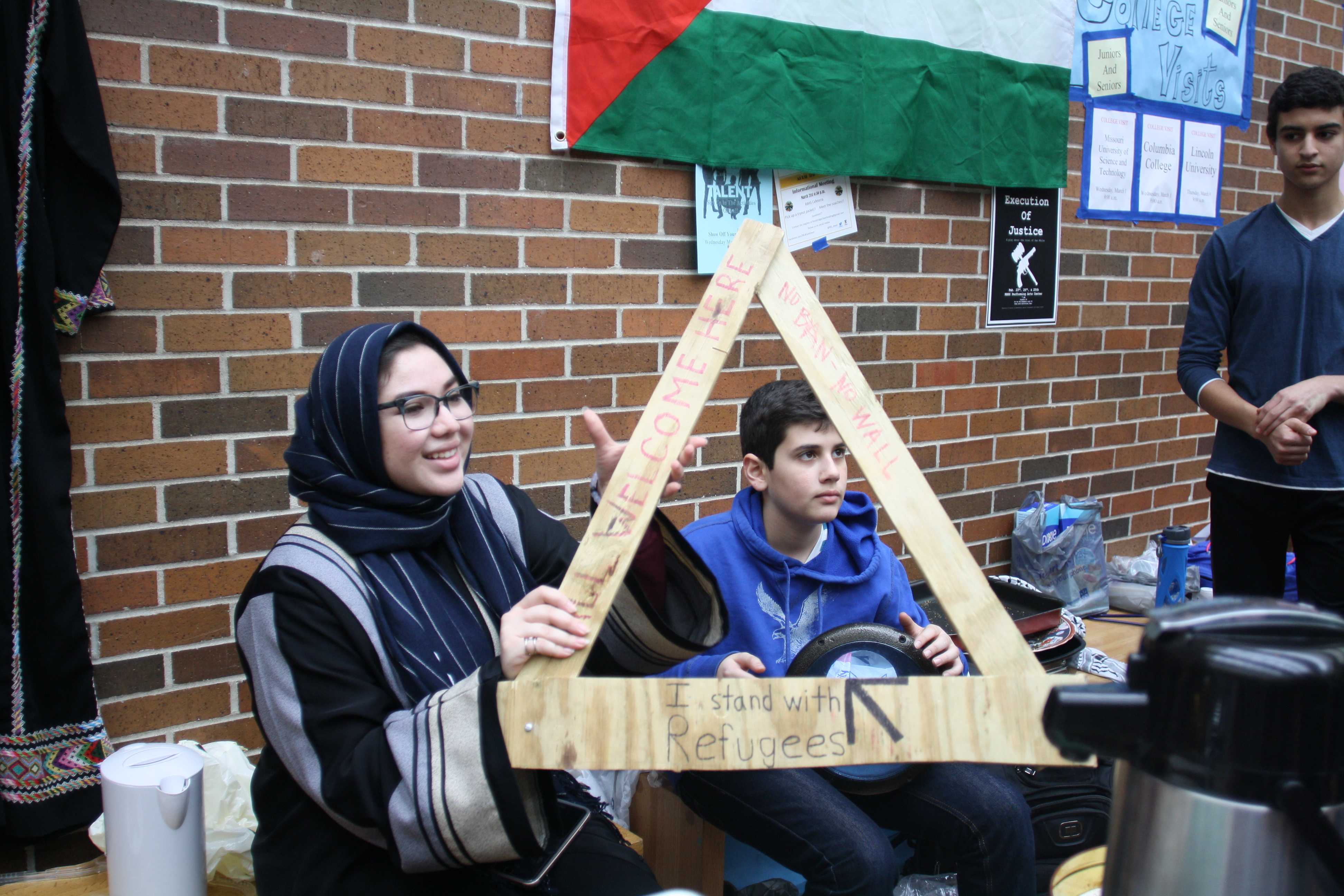 Photo by Emily Oba
[dropcap style=”flat” size=”4″]I[/dropcap]n a rebel-occupied region in northern Syria, civilians faced a gruesome attack April 4. The deadly chemical bomb attack left more than a hundred dead, including children. Events like the recent bombing prompt people to leave their homes and search for a safer country to live in. Although in a safer place, most people come into countries with little to no personal belongings.

The Global Issues club is holding a supplies drive for the Mid-Missouri Refugee and Immigration Services (RIS) to support local refugees. Co-President junior Katie Kirchofer said the club wants to show refugees that someone is standing behind them.

Co-Presidents of Global Issues, Kirchofer and junior Asa Pojmann, came up with the idea to support refugees by giving essential everyday items they need. The club asks for things such as diapers, soap, shoes, clothing and anything one might need when they arrive with nothing in a new country.

“We decided on this because of all of the hate that innocent people are having to face because of their status as a refugee or immigrant,” Kirchofer said. “[Additionally we wanted] to bring attention and compassion families in need.”

Originally, the Global Issues club wanted to focus its efforts on just the Syrian refugee crisis, but Kirchofer said club members decided to broaden their work to all immigrants in general because of all the hate refugees and immigrants receive from certain people. By partnering with RIS, the club is able to reach all refugees in central and northern Missouri. RIS Kids Education and Volunteer Coordinator, Grace Wildenhaus says donations help immensely because of the limited supplies immigrants come into the country with.

“[Moving to a different country can be] a pretty stressful transition at times, so all the support the refugee population gets means a lot. Raising awareness, fundraising, and collecting donations or donating something also goes a long way,” Wildenhaus said. “Some people don’t know there are refugees in Columbia; we want the community to know and be supportive. RIS is limited on funds and resources, so donations mean a lot. Refugees arrive to Columbia with next to nothing, so everything we can collect on their behalf really eases the big change.”

Students can give their donations to the Global Issues club, or they can directly give them to the RIS at 201 W Broadway St. from 8 a.m. to 4:30 p.m., Monday through Thursday.

Not only is Global Issues helping refugees start their new lives in Columbia, but they are also giving them community support by raising awareness. During Global Village, Global Issues set up an informational booth on the refugees in America to educate students and teachers of the crisis.

“We also had a sign/frame that said ‘I stand with refugees’ and a ton of people took pictures with it so then we decided to make a heart collage of all of the pictures and were having Mohammed, one of our janitors, hang it in the mosque because we all feel like it’s important for immigrants and refugees [to] have our support,” Pojmann said. “According to Mohammed, a lot of people who are either immigrants or refugees don’t get a lot of outside support.”

In April Global Issues also plans to bring a local representative from RIS to speak in a seminar to talk about how ordinary citizens can make a difference in refugee’s lives.

“People in Columbia can volunteer with RIS to help resettle refugees,” Wildenhaus said. “We’re the local resettlement agency that receives all new refugees to Columbia, meaning we find housing, furnish, pick them up from the airport when they arrive, and provide extensive case management. It’s a team effort, and we get a lot of help from volunteers.”

What will you do to help refugees? Tell us in the comments below.

Districts, a thing of the past for the music department