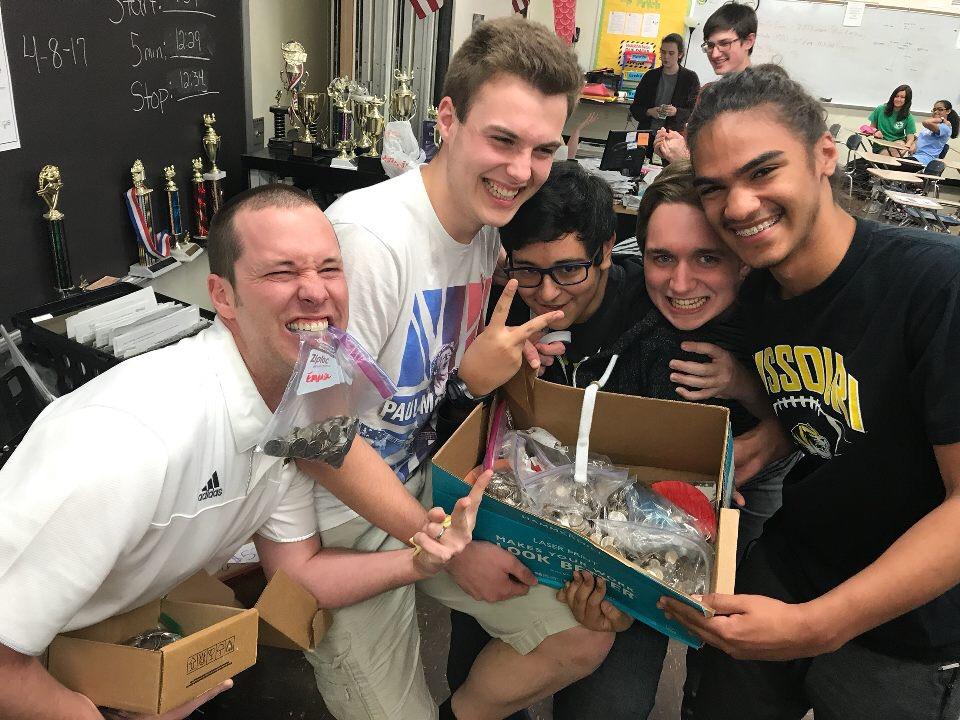 Throughout the week of April 10, Greg Irwin and Shawnna Matteson’s Advanced Placement (AP) World History class threatened their peers in competing history classes with a brick of 25,000 pennies.

The threat was for a competition among all the sophomores in an annual event RBHS called “Sophomore Sabotage,” a fundraiser for the events following students’ sophomore years. However much money the students raise is the amount taken off of their expenses for events like senior prom.

“Each studies teaching pair is its own team,” Hopper said. “The teams are trying to get the most positive amount on money. All of the silver coils are positive and add to a team’s score. However, the different teams can sabotage other teams with pennies or dollar bills, which take away from the team’s score.”

Hopper also said that at the end of the day, the negative amount is taken away from the positive amount and by the end of the week, each team tries to raise the largest or most positive amount. The team that wins gets a food prize and bragging rights, but the entire sophomore class gets discounted prices for their future class events.

“This year’s sophomore class raised more money than any of the other grades [did,]” Irwin said. “It broke records.”

The rivalries among classes resulted in a total of $3,213.81 of fundraising money; however, when a miscount at the bank caused a team to shift into second place, one team found themselves without their beloved food. The class that thought it won then ended up in second place was Irwin and Matteson’s.

Sophomore Drew Morris, a member of Irwin and Matteson’s class, felt “a big disappointment” when his team ended up in second.

“We worked incredibly hard to win and believed we did for the weekend,” Morris said. “[The miscount] was similar to Steve Harvey’s mistaken announcement at Miss Universe and the wrong film called for Oscar’s Best Film, which let many people down after the mistakes were corrected.”

Although the miscount was a disillusionment for the sophomore class, Morris said they were impressed with the work they put in and the class participation. Hopper agreed and said she looks forward to her future class discounts.

“It was fun to work with my class to make a strategy,” Hopper said. “We even made a huge group chat to work together and share [strategy] ideas. It’s exciting to know that we raised so much money for future activities in senior year.”

Senior Skip Day offers a day of relaxation despite consequences