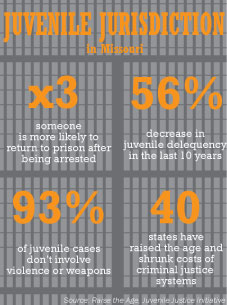 On route to matching surrounding states, there is a bill working its way through the Missouri House and Senate to make a change.

Wallingford is the sponsor of Senate Bill 40, which states, “Requires children under the age of 18 to be prosecuted for most criminal offenses in juvenile courts unless the child is certified as an adult.”

He said his motivation behind the bill is to continue Missouri’s record of having one of the top juvenile justice systems in the nation; thanks to their approach.

Public officials in Missouri have worked with the Division of Youth Services Advisory board to create a juvenile justice system built on holding juveniles responsible for their actions and helping them to turn their lives around, according to the Missouri Approach.

Xavier Powell is a 19-year-old and former Rock Bridge student who has been through the Missouri juvenile system multiple times for his actions. Even though bad things have gotten Powell into the system, he has only good things to say about it.

“The Missouri Approach is amazing,” he said. “It makes me want to be a better person, and the people that work there make me want to take responsibility for my actions instead of blaming others.”

At RBHS, 17 year olds are considered adults if the administration has to get law enforcement involved. If the bill is passed, administrators would follow juvenile protocol when dealing with a 17 year old that commits an offense. However, that would be the only change.

“The only difference is that I would recognize a 17 year old as a juvenile instead of as an adult because juvenile laws are different from adult laws,” Officer Keisha Edwards said.

In the human brain, there’s a prefrontal cortex that is the center of all decisions making. According to the Mental Health Blog, it’s not fully developed until closer to 23 years old. Until then, the brain does not have the complex decision making and planning skills that adults have.

“I do not believe 17 year olds have the rational decision making that adults have because physiologically we know that the prefrontal cortex, which is your decision making center, is not fully developed until you’re about 23 years old,” Dr. Nieuwenhuizen said, an administrator at Rock Bridge.

Senate Bill 40 will do more than give students another year to develop appropriate decision making skills. It will save money for the states that choose to participate in the movement and raise the age.

A possibility that comes with passing this bill is the amount of money it costs. In Connecticut, it cost more than $100 million for taxpayers to fund for 17 year olds to be seen as juveniles. This push was known as the ‘Raise the Age’, a campaign started in New York to push for all kids under the age of 18 to be seen as adolescents even when they commit a crime. in New York, raising the age would save the state about $117.11 billion in criminal system costs.

“Senate Bill 40 will also save taxpayers money by lowering the cost of housing inmates in adult jails and prisons, and allowing the juvenile justice system to yield more income producing and tax paying citizens,” Wallingford said.

If Senate Bill 40 becomes law, 17 year olds will be charged as juveniles if they’re convicted of a crime. This will allow them to stay in a juvenile center where they still get in trouble for their offense but are able to learn from their mistake and grow as a person. They’ll be able to develop their brain so that they’re able to make better decisions.

“I think it should be 18. It’s 18 for everything else at the state level and federal level,” Edwards said. “You can vote at 18. There’s so many things that state/federal governments recognize at 18.”