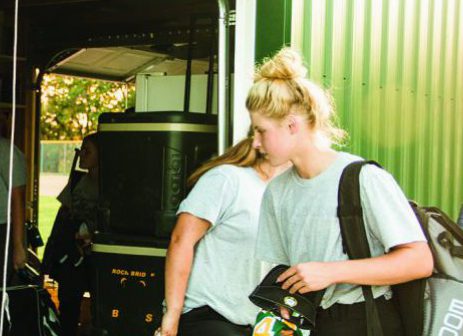 [dropcap style=”light” size=”4″]A[/dropcap]s the saying goes, “If you want something done, do it yourself.” For the softball team, this took the form of building a completely new equipment shed from scratch. Team parents, including junior Hannah Pate’s dad, took it upon themselves to create the storage space when CPS and booster club money wouldn’t cover the cost.

“Usually, the coach will say [we need new materials], and the dads will come together and organize like ‘Hey, I’ll get the paint for this’ or ‘I’ll get the concrete to pour’,” Pate said. “My dad, he’s a construction worker, so he has the equipment for it. So they’ll just all meet up together at the same time and work on it for four hours. They [worked on] the shed for two weeks. They all pitched in money.”

While the softball team had to build its own shed, they have  received amenities both from CPS including new bleachers, backstop and a concrete walkway near the field and the booster club, who bought them a speaker system and indoor batting cages. However, adding onto RBHS facilities comes with more consequences than simply better aesthetics. Athletic Director David Egan says CPS has to deal with ensuring that all three high schools share equitable access to equipment.

“Title IX, [a piece of federal legislation that prohibits discrimination], is a big piece of it. Title IX legislation requires that there be equity amongst and between the schools,” Egan said. “One of two things has to happen [if RBHS has better resources]. Either Hickman and Battle have to be granted access to our facility, and we have to equally share it, or we needed to build those facilities for those schools.”

Historically, RBHS’s active booster club meant that oftentimes volunteers would raise money for new  resources, only for CPS to turn around and fund something similar for Hickman. Nowadays, the tables are turned. The emergence of Battle, and it’s state of the art design, means that CPS needs to build up RBHS and Hickman to it’s level.

“That’s why you’re seeing the football [and] soccer stadium project going on, it’s why you saw the improvements that were going on at baseball [and] softball,” Egan said. “I do believe the district does genuinely try to provide equitable opportunities and facilities to all kids.”

Nevertheless, it’s not just the architecture that distinguishes the three schools. A combination of location and districting means that the mixture of demographics, including household income, varies as well. Dan Stockman, president of the Hickman booster club, believes CPS needs to be held accountable for ensuring equity. On the other hand, in Stockman’s opinion, booster clubs should remain independent from such manipulation.

“You just have a different capture, different folks, different involvement, etc. I think this part of town here, I’m speaking about Rock Bridge, is enamourous, a majority of people want to move down south here. You can see a difference in socio-economic status as you go from North of town to South of town,” Stockman said. “It’s neither good or bad, it’s just what it is. It just seems like with the amount of students and parents [at Hickman] that we should have more involvement.”

The RBHS booster club, on the other hand, has had success both with, and independent of, CPS’s support. Booster club members, including Kay Hake, have partnered with CPS on a number of recent projects, and they’ve even contributed $100,000 to the new football field.

“We’re just thankful as a group of parents dedicated to athletes and coaches that we can fund these things for our school and maybe get them a little quicker,” Hake said. “My suggestion [to the other high schools] would be to fundraise for things that you want, that the district cannot afford, because that’s worked very well for us.”

For Pate and her team, as long as they have quality practice and game space they’re happy. Although the money CPS and the booster club donates isn’t always enough, Pate still is grateful for the contributions.

“We take pride in our fields. We want, when people come to play us, to be like ‘Hey, our field is our territory, our turf.’ When [other teams] step on our field we want to be proud of it,” Pate said. “We love having a really nice field because it brings up our pride along with our uniforms and everything like that. So we take a lot of pride in our facilities and how great they are. We really appreciate it, the funding that we got for that.”