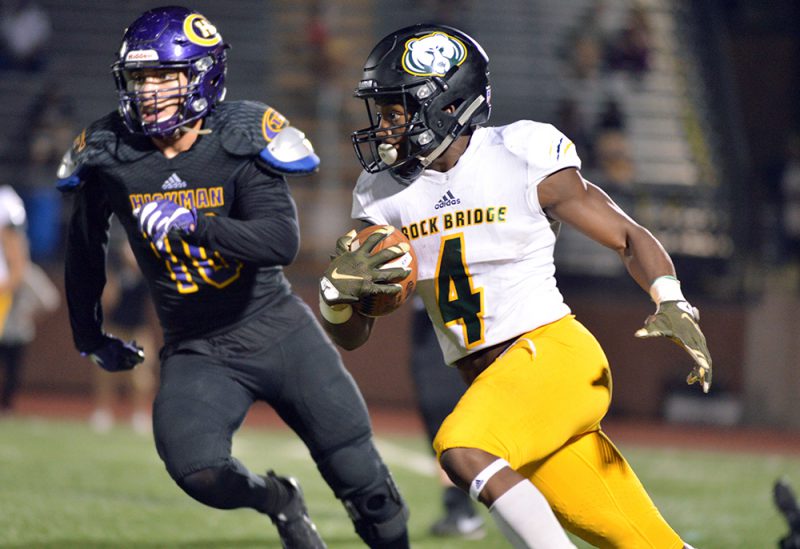 Taking possession of the ball, junior wide receiver KyJuan Collins scans the field for an opening with hopes to score for RBHS. The Bruins faced off against Hickman High School winning 41-9 during the Providence Bowl Sept. 15. Photo by Maya Bell

[dropcap size=”4″]W[/dropcap]ith districts less than a month away, the football team has proven itself to be a worthy adversary. The Bruins have surpassed their wins in their 2-8 record from last season, standing at 4-1. Along the way, they beat Rockhurst, DeSmet, BHS and, most recently, HHS. Their only loss being against Lee’s Summit High School 21-27.

“Going into the season, we knew we had to come in with a chip on our shoulder and prove ourselves to everyone,” junior wide-receiver Wyatt Towe said. “The team is focusing on and succeeding on bringing everyone to play together as one unit rather than 11 guys playing for themselves.”

The Bruins will face the Jefferson City Jays tomorrow with home field advantage. Seeded second in the district, the team is counting on this game to solidify their ranking.

The Jays, 2-3 and ranked seventh, have had their ups and downs this season. Their last game was no different as the team kept things close with St. Louis University High School until the second half when the Bilikens pulled away to win 38-20.

The Bruins are coming off of similar shellacking — only they were on the giving in their match-up a week ago. The Bruins dominated the annual Providence Bowl, defeating rival Kewpies 41-9.

While the score difference between the Bruins and Jays may point to any easy win, Head Coach Van Vanatta does not believe Friday’s game will necessarily be.

“No win is easy,” Vanatta said. “They are physical, well coached, and this is a game that helps seed district play.”

Though senior wide-receiver and cornerback Reece Jarvis recognizes the Jays as a worthy opponent, he thinks the Bruins are prepared. Still, he sees one area RBHS must improve.

“We have got to stop getting so many penalties,” Jarvis said. “The team is focused on doing their job. If we lose, then that’s because we beat ourselves. If we do our job and execute, I’m pretty sure will come out with the win.”

Vanatta agrees that his team’s focus must be on getting better.

“We need to realize that our effort will determine how we play,” Vanatta said. “Our strategy is to play fast, physical, and determine to get up when we get knocked down.”

With four games to go before districts, Towe believes a Bruin win can help jump start a trip to the playoffs and continue the growth the team has seen this year.

“This season will be a success,” he said, “if we continue to maintain our success and make people fear and respect RB football.”

The Bruins host the Jays tomorrow. Comment below if you plan on going.