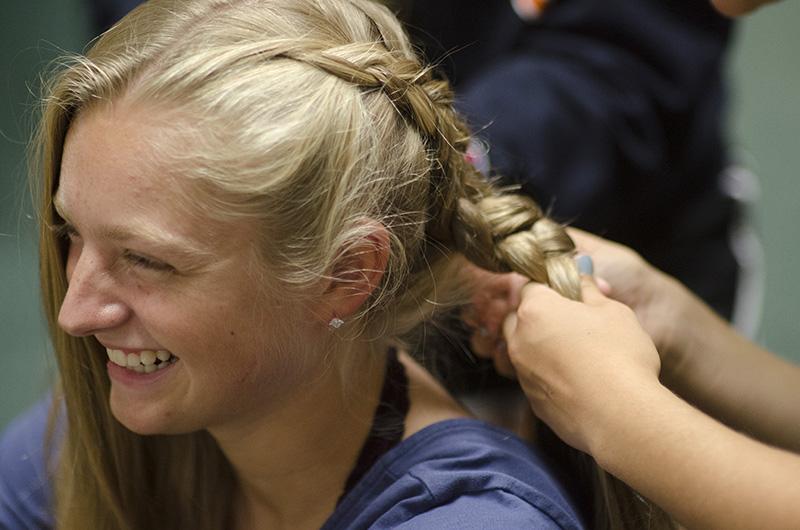 Members of the Emerald Regiment marching band scatter through the hallways as they devour fried chicken, cookies and cakes from a meal provided by band boosters. With only an hour left until they take to the field, excitement runs high, creating a jovial atmosphere for the last home game of the year. Cami Kudrna, a graduating senior and one of three drum majors of the Emerald Regiment marching band, maintains a calm yet energetic demeanor during the preparations. She weaves through the crowd of musicians, chatting and boosting their confidence for the upcoming show.

“When we’re all getting ready, everyone is just having a good time,” Kudrna said. “It’s just a matter of enjoying ourselves and making sure everything is together and no one is forgetting anything.”

Although she has never considered making music a career, seven years of playing flute and four years of being in the Emerald Regiment has given Kudrna the opportunity to find and pursue a passion throughout her time at RBHS while also developing her leadership skills.

“In eighth grade, we watched a promotional video that showed the band going on a trip to Hawaii, so I joined band just so I could go to Hawaii on a trip,” Kudrna said. “We never did end up going to Hawaii.”

From that point on, marching band has consumed her high school experience. Despite the lack of a thrilling trip to Hawaii, she dedicates herself to the band for around 27 hours a week, making lasting memories with her fellow musicians along the way. Kudrna reflects on an entertaining incident from a run through of the “Story of My Life” show from the 2015-2016 marching season.

“My friend Hannah and I were going through the run, and it was kind of a mess for us; I had condensation running down my leg from my flute, and Hannah kicked off her shoe in the middle of the run,” Kudrna said. “We could barely play we were laughing so hard, but the show had to go on.”

Entering marching band as a freshman, Kudrna set her mind on becoming a drum major. The exciting prospect of being able to conduct the band throughout the season and earning a position of leadership pressured her to make sure that she stood out to the band directors as a strong musician. From a timid underclassman who was afraid to talk to any members older than herself, let alone the drum majors, to a confident leader, Kudrna’s time in the Emerald Regiment has proven to be an outlet for her musical development.

After four years of marching and a season of conducting, she has made herself a crucial part of the Emerald Regiment. In the final moments of the Emerald Regiment’s last performance of the 2017-2018 marching season, the stands fill with cheers of admiration. Cami peers out over the band, looking for any signs of excitement or disappointment in the faces of her fellow musicians.

“Once we come off the field moments after the show, you can see and hear everyone talking about what they thought went well, what might have been weird, if they thought it was a good run overall…” Kudrna said.

Maya Bell is a senior at RBHS with a love for photography and covering all sorts of topics in journalism. Maya takes part in the Young Artists Philharmonic of the Missouri Symphony Society as the second chair cellist.