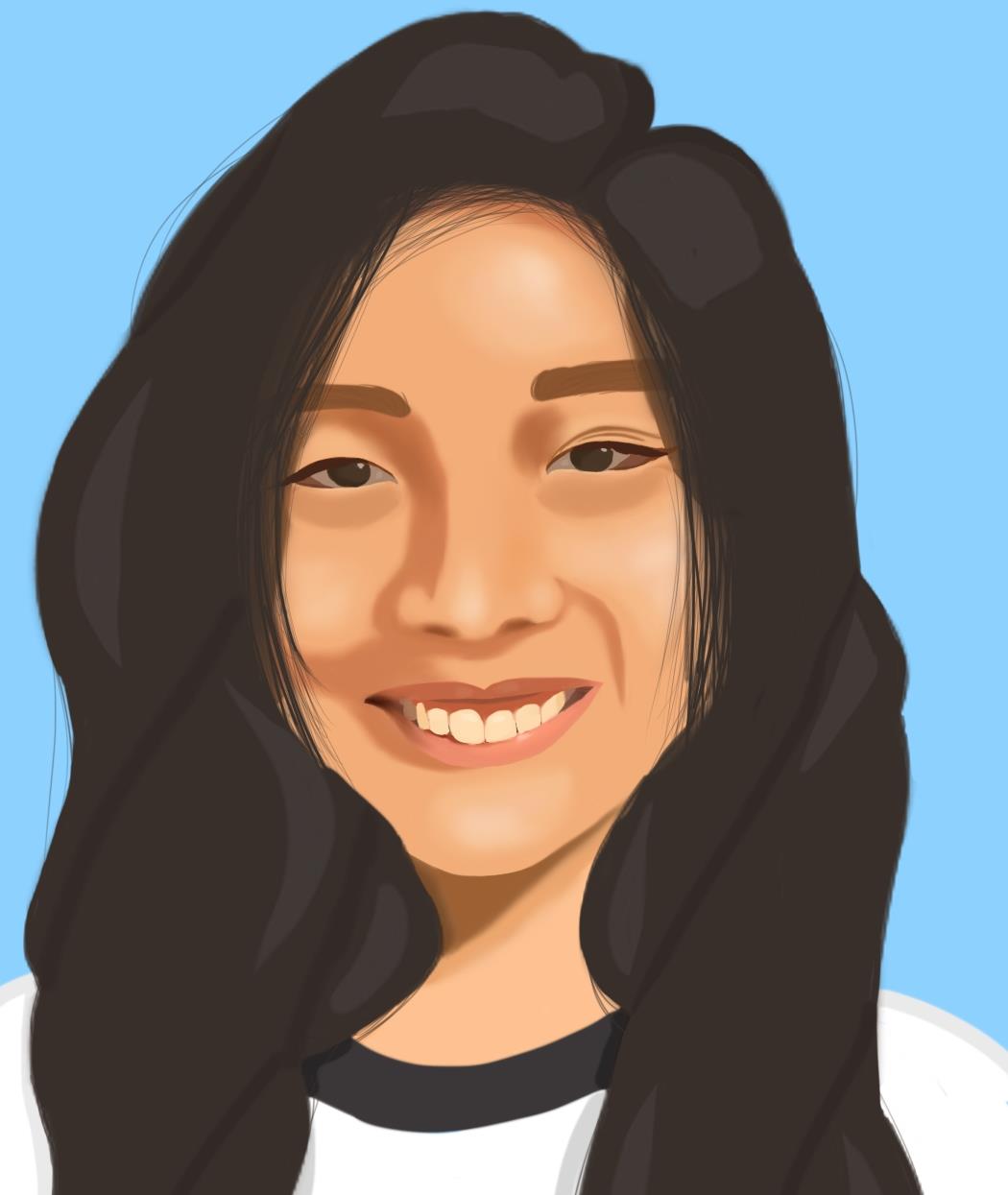 On this edition of Behind the Paper, we learn about junior Moy Zhong and how she came to be on our school’s newspaper staff. I only met Moy this year, but from the short time we’ve known each other, I’ve come to call her a close friend. She’s humble, kind, has a great sense of humor (as you will see) and is extremely talented at what she does. I hope that by reading about her today, you come to like her, too.

Tell me a little about yourself (i.e. hobbies, family, pets, etc.).

“[My hobby is] suffering, aka school work and crying in my bed. To be honest, I just like art and plants. I have a tree in my room and a cactus named Custard. I have a family of two parents who immigrated from China and a sister who lives in Seattle. I got a pup that’s that size of a small child whose name is Ruby. She’s hecka old (13 years) and lost one of her front teeth, so her tongue is always hanging out. (D*mn, she a freak).”

What is your position on staff?

When did you begin drawing ?

“I started drawing when I was a kid because there was nothing better to do since my parents were always at work. My sister was busy with high school, and I lived in the small town of Ames, Iowa. I really liked watching animated media like the Disney movies or Pokemon, which were heavily art-based shows, and always drew characters from the show in my spare time. I started drawing them so often that I had become somewhat good at art and furthered my interests in the field. As I grew older, I started experimenting with other forms of art in my spare time, like 3D and digital, so art eventually became a hobby of mine.”

“It’s a super broad subject where there’s no ‘right’ way to do it, so it’s hard for me to make mistakes because there’s no actual definition of what those would be. It makes it enjoyable where I don’t have to worry about messing up, and even if I do, I can always paint over something and try again. [Drawing is] something I can control — and I can’t control a lot of things in this life.”

What is your favorite part of newspaper class?

“It’s something personal to each and every person on staff. People, for the most part, are somewhat invested in what they’re making, and they weren’t put into this class because they needed a credit but because they actually wanted to put their time and effort into the class. You aren’t stuck with a bunch of lazy bozos who don’t care. There [are also] a lot of buds. [Newspaper is] the closest thing I can get to what I think jobs are like in the art field, which is something I’m interested in. The class is so different from any other, where I have to sit in and listen to lectures, because it’s so student-oriented. It functions like an actual working body where I get to learn from hands-on experiences. Unlike semester-long project-based classes, my grades and how well I do in the class aren’t dependent on one big and final product I’ve spent half the school year working on. The paper and Bearing News are like an experiment, and how I’m graded is based on how much I grow every cycle and how I’ve gotten everything to progress. I don’t have the pressure of putting all my energy into one project because I know it is a process I can always get better at. [Newspaper] gives me a legitimate excuse to stay late at school and eat lots of food during late nights. Also, our teacher, Mrs. Stover, is the best.”

What made you want to join Newspaper?

“I had been doing digital art since I was little and wanted a chance where I could incorporate it more into my life, which had been consumed by school, [so] newspaper was the answer. Similarly, I didn’t take any art classes when I started high school and wanted a class where I could take a break and do something I enjoyed. When I saw an edition of The Rock for the first time during my freshmen year, I thought of the student publication being super cool since it was student-based, and people could actually produce a piece of work that would actually be seen and acknowledged by the school. I got especially hyped when I saw that art was included in the paper. [The art] was kinda crappy during my freshman year, but if that art [was] accepted, I saw there being a chance mine would be accepted, too. I had friends who were a part of the Southside Media team, like Rochita and Ann, who helped me get into the club.”

Do you plan to take newspaper or journalism in college and/or pursue a career in that field?

“I don’t know if I’m exactly taking journalism in college because for the most part the classes focus on how to be a good writer, and I’m not about that life. Maybe in the future I’ll do something dealing with journalism. For artists, most of the time you’re building infographics in Illustrator everyday, but I know there are some publications that are more art-based, like the New Yorker, that I might be interested in. I don’t know; I just wanna do something with art that doesn’t leave me broke like Van Gogh.”

Carmen Ramirez is a first time artist for Southside Media and senior at Rock Bridge. On her off time she enjoys playing the piano, cello and ukulele, singing, drawing and spending time with her dog.

Behind the Paper – Ben Kimchi

Behind the Paper – Jordan Rogers