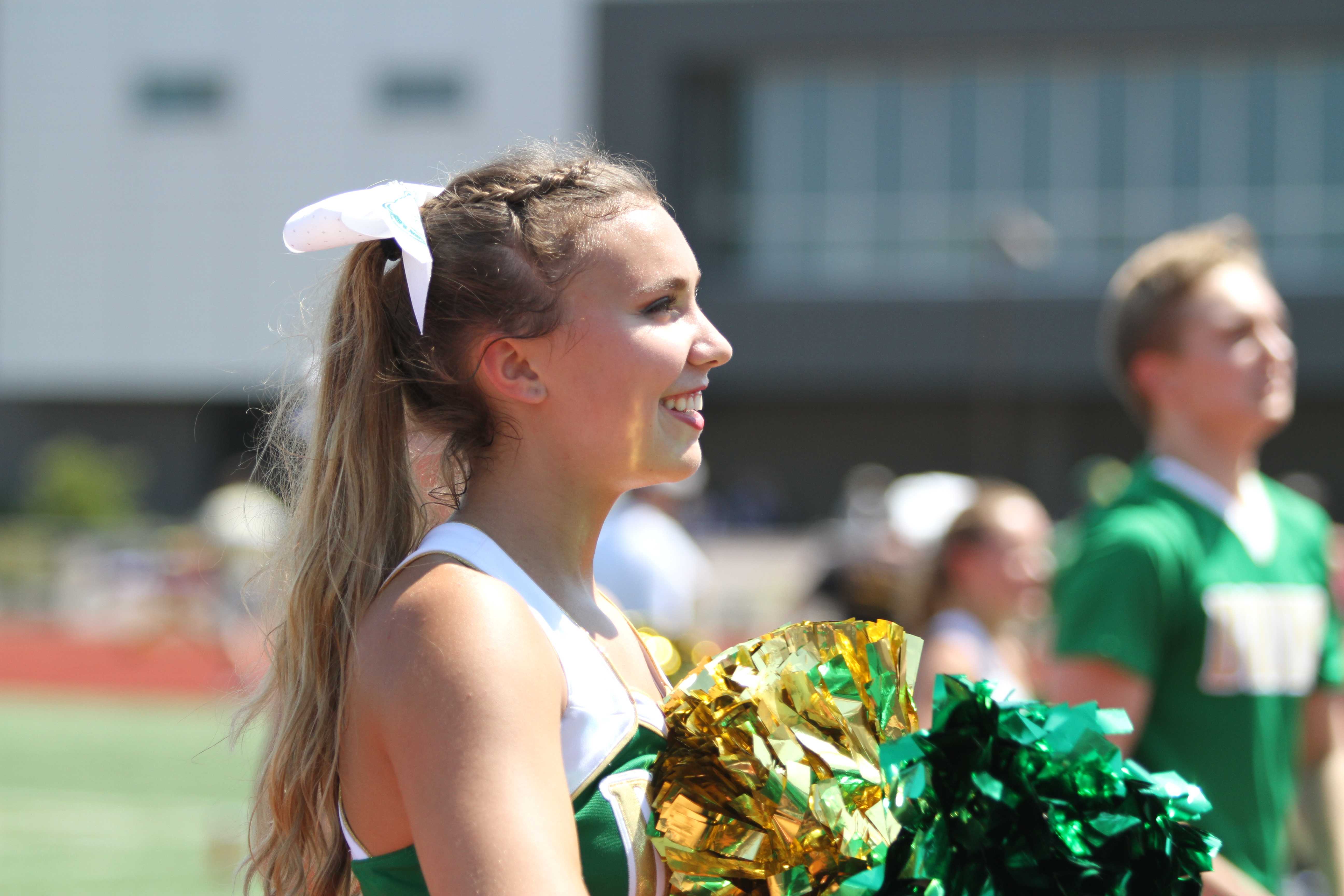 Senior Elizabeth Curtwright smiles from the sideline as she cheers on RBHS football at the game against BHS on Sept. 1. Photo by Camryn Devore

[dropcap style=”light” size=”4″]A[/dropcap]s the varsity high school cheer season comes to a close, the Bruins are ready to compete at the state level, and varsity Head Coach Kristine Hayes is as confident as ever.

The state cheer competition will be at the Hearnes Center, Oct. 28. The varsity team will perform a 3 minute routine at 11:45 am and awards begin at 2:30 pm.

“This year’s team is extremely strong and incredibly talented,” Hayes said. “I have a large group of seniors who have cheered multiple years, so there is a lot of leadership there. It has also been helpful for them to have consistency of coaches and expectations.”

While the coaches and expectations may remain the same, one thing is changing: the division in which the Bruins competes. For the first time in RBHS history, there is a male cheerleader on the varsity competition team, Ethan Hayes, son of Kristine Hayes, which obligates the team to compete in the coed division.

“This is our first year ever to compete in a coed division,” Hayes said. “There are 22 teams in our category, which is more than normal and a little overwhelming to think about, but I know that the team has worked extremely hard all summer and fall to prepare and if they do their best they will score well.”

The increase in competition is not the only obstacle that RBHS will face at state this year. With the loss of several teammates within the month of state, the team will have to turn adversity into good.

“We are in a bit of a scramble as we had some girls [team members]) back out at the last minute and the rules state that we [the team] cannot replace them,” Hayes said. “Our alternates are already being used for the JV routine, so we are having to rework and rewrite parts of the routine to accommodate that. We have time to get there, and I am confident they can do it.”

Junior flyer Caroline Curtright agrees with Hayes that the departure of the team members has been hard. While she, like many of her teammates is frustrated, she is looking up.

“After hearing that [she] would not be competing with us in state, it was frustrating in some ways because it has a much bigger effect on the routine than [she] probably realized. The stunts and pyramids were designed specifically for a certain number of people,” Curtright said. “With that being said, it has [encouraged] the remaining girls work even harder and grow closer through this obstacle.”

The Bruins will also perform an additional section at the state competition this year for senior Sydney Kent. Her coaches and teammates would like to do this for her to show off how lucky they are to have been a part of a team with her.

“After our competition routine is completed, Sydney will enter the floor, and the team will perform the pyramid and dance from the homecoming assembly to spotlight her hard work and commitment to the team,” Hayes said. “We have been very fortunate to be able to cheer with Sydney for the past several years, and we have learned so many things from her. I am super proud of the team for putting in some extra time to allow her to participate in state with them this year.”

Kent’s teammates are equally as supportive as her coach. Junior main base Anel Castro wants this to prove that Kent’s down syndrome does not hold her back from achieving her dreams.

“My teammates and I have been working super hard on a special pyramid part for our teammate Sydney,” Castro said. “We are so excited to show everyone that she really is no different than the rest of us.”