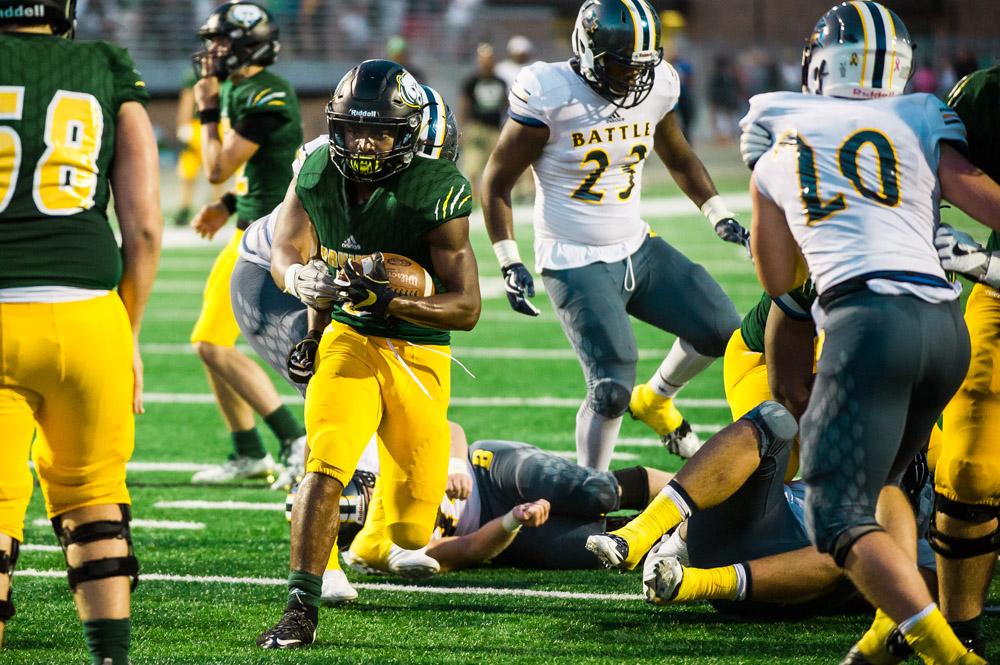 With possession of the ball, junior running back Nate Peat scans the field for an opening with hopes to score for RBHS. The Bruins won 9-0 on Sept. 1. Photo by Yousuf El-Jayyousi

The game’s tone was set early in the first quarter with strong defense from both sides.

However, on the Jaguars third drive, they pushed into RBHS territory for the first time, but a Blue Springs South block in the back penalty took the momentum away, and forced a punt.

On the same possession, Blue Springs South made it to the Bruins 24 yard line, leading to the first points of the game with a pass to the back corner of the endzone. This resulted in a Jaguar’s 7-0 lead.

On the ensuing kickoff, the Jaguars forced a RBHS fumble, taking over at the Bruins 19 yard line. The defense however, stayed strong and limited the damage to a field goal, and a ten point deficit.

RBHS responded quickly, with Norris driving into the Jaguar red zone,  and converted a 33 yard field goal with 11:12 left to play in the game.

After forcing a three and out, the Bruins once again pushed into Blue Springs South territory. On the fourth down, Twehous connected with sophomore wide receiver Zach Boyles for a game tying touchdown 10-10, with 6:33 left to play.

After senior quarterback Trevor Twehous, made his final start of his high school football career, he noted he will remember his last season.

“I’m always going to have a good feeling about [my final season] because as a team we all acted like family, and no one thought they were better than everyone else,” Twehous said. “Coach [Vanatta] did a great job coaching us and making all of us confident in ourselves.”

As regulation came to an end, both teams traded turnovers on consecutive plays, leading to overtime.

Winning the toss, Blue Springs South elected to get the ball second.

The Bruins offense was shut down by the Jaguars potent defense, and quickly led to a fourth down. Will Norris came on, and nailed a 41 yard field goal, which gave Rock Bridge their first lead in the game 13-10.

Next, it was the Jaguar’s turn on offense and on their first play they completed a 24 yard pass play to the Bruin’s one yard line. On the next play, a Blue Springs South run play up the middle, resulted in a touchdown and put an end to RBHS’ trip to the state championship and their season.

“There is never a game plan in overtime, we put points on the board early and just missed a tackle from changing the pass play to the one yard line,” Vanatta said.

Despite  RBHS’ disappointing loss and end to the season, junior offensive lineman DJ Baker is happy about how the season went.

“This season was one of my favorite seasons I’ve ever played. I really like the new coach, our team played hard, and fast the whole way,” Baker said. “If I had to describe this last game, it would be heartbreaking, we had a really good season,” Baker said. “I thought we might be able to go a little farther, but the cards on the table didn’t play out.”

“My first season at Rock Bridge has gone better than expected.  The Seniors have set an example for others to follow and did a great job leading this team to a successful 9-2 season,” Vanatta said. “Unfortunately, only one team can be great at the end. But this 2017 Bruins Football team over exceeded any of my expectations and couldn’t be prouder.”

What was the best part of this year’s football season? Let us know in the comments below.

I was so happy to see the football team slay the competition this season. They have nothing to be ashamed of they played a top notch season and you could really see from the way they played that they were a real team.