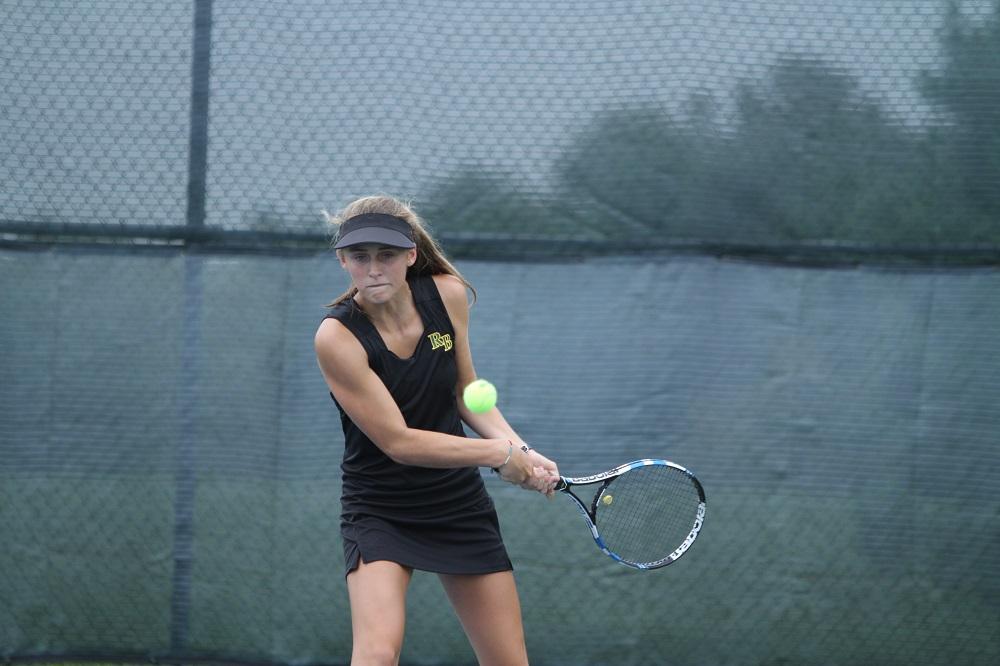 The girls’ tennis team repeated the past on Oct. 12 by winning the Missouri State High Schools Activities Association (MSHSAA) State Championship for the fourth time in a row, sweeping the semi-finals and finals with a score of 5-0 against Lee’s Summit West and Lafayette respectively. Junior Eleanor Fay contributes the team’s success to their camaraderie.

“We all have great chemistry with each other and support each other no matter what,” Fay said. “Our closeness and friendship definitely helped us to become state champions again.”

In addition to their state win, the Lady Bruins won the doubles tournament in a rare match against themselves. The pairs of seniors Faith Wright – Katherine Dudley and junior Corinne Farid – Fay faced off, with the younger duo claiming the doubles title. Dudley said that the team’s time at state, although it was their fourth time in a row being there, was something no person was arrogant about.

“Going to state is a massive accomplishment, a rarity,” Dudley said. “Already knowing the format and energy of the state tournament really helped ease the team’s nerves because we knew what to expect.”

Head Coach Ben Loeb said their preparation for state focused on all aspects of playing: physically, emotionally and mentally. This was what paid off in the end for the Bruins for not only this state championship, but the past four years as well, he said.

“A major commitment over an extended period of time with good athletes that value being as successful as they can be, plus playing with confidence and composure when we needed it most [helped achieve the state title],” Loeb said. “Learning how to get out of your own way is important when you get in your own way.”

The tennis team finishes holding an almost clean record this past season, with an end score of 23-1. Fay looks back over the previous months fondly, saying their accomplishments didn’t come without having to work at it.

“We had some challenging matches this season, but we adapted and overcame all the obstacles thrown at us,” Fay said. “Working together as a team reassured us that we could do anything.”

How do you feel about the girls’ tennis team’s dominance at state? Let us know in the comments below.