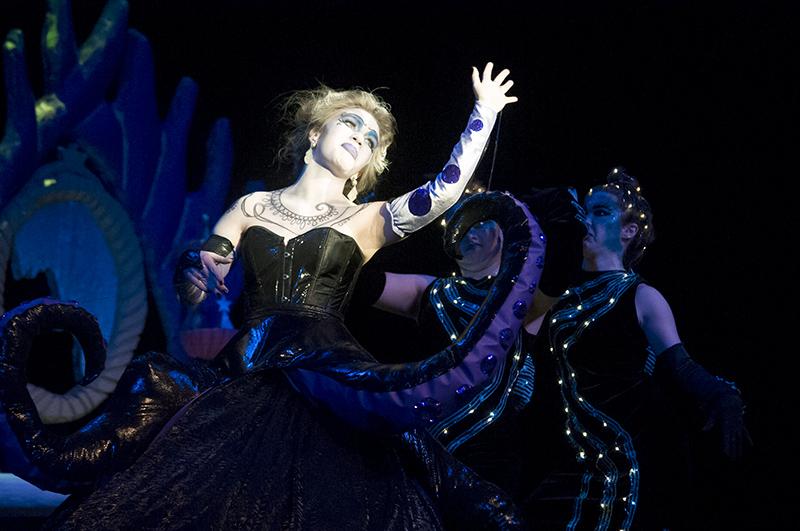 Under the sea and under the lights of the Performing Arts Center from Nov. 9 – 11, the RBHS Performing Arts Center (PAC) will submerge itself into the world of Disney’s “The Little Mermaid” for the 2017 fall musical. While auditions began in September and rehearsals followed, the cast is prepared to put in the work necessary to to show an audience what they are passionate about and put on a good performance.

For her last fall musical performance at RBHS, senior Andrea Baker is determined to end her era with a bang. Baker, who plays Ursula in the 2017 show; sees “The Little Mermaid” as an opportunity to better herself as a performer, as she plans to study musical theatre in college. As for the rest of her high school musical career, Baker is still excited to perform with some of her best friends.

“I wanted to audition for this musical because it’s my last opportunity to perform with these amazing people,” Baker said. “This program is such a big family, and we always become very close during the musical. It’s always felt like a family, but as we progressed through high school and spent more time together, we’ve all grown insanely close.”

With rehearsal almost every day, the cast of around 30 people is more than prepared to put on a show in November.  Although this musical will be junior Wolf Schaefer’s first time as one of the leads, Schaefer, who plays Prince Eric, feels confident in his ability to perform. He sees all the preparation during rehearsals as an outlet for any nerves he would have during the actual show, so he feels more braced for his role.

“We rehearse almost every day for around three hours,” Schaefer said. “I’m not new to musicals [at RBHS] but being in the spotlight is a change from what I normally do in show choir or in the other musical I’ve been in, though I don’t have stage fright. Nonetheless, all eyes will be on me at times and that will be a weird adjustment. I hope we can put on an entertaining show without too many things going wrong.”

The director, choral music teacher Mike Pierson, said he always feels worried for each production. In the end, however, the show usually comes together with great success. Pierson also feels all the hours of worry and hard work will be well worth it in order to achieve great success, he said. Pierson chose “The Little Mermaid” based on a number of factors but always with the same end goal in mind: an entertaining show.

When roles are cast for the musical, the intensive aspect of pulling off a recognizable Disney show comes into play. With recognizable music, story and characters, as well as a reach toward a younger audience, the overall expectation for production value seems to be higher, Pierson said. Baker agrees, believing the musical will generate a larger audience than past years.

“Although we usually tend to have decent sized crowds, because this year is a Disney show, more families will be interested in seeing it,” Baker said. I also think that because it’s a Disney show, the cast will just naturally have a lot more energy and even more fun than usual.”

With such a recognizable show, the cast must put in the extensive work necessary to execute the performance, Pierson said. With just a glance at a agenda belonging to someone in the musical, it’s obvious of the amount of hard work that goes into the show. As for Pierson’s hopes for the musical, he hopes for an enthusiastic audience that leaves the show humming the tunes with great memories of the performances and for outstanding performances by the actors for those audiences, he said. Likewise, Baker aspires to leave a lasting effect on the crowd in order to shine light on her passion and inspire people to take part in what she loves.

“I really hope this musical brings more people to the program,” Baker said. “It’s going to be a great show, and it’s a great cast, and I hope a lot of people will come to the show and consider being part of this great program.”