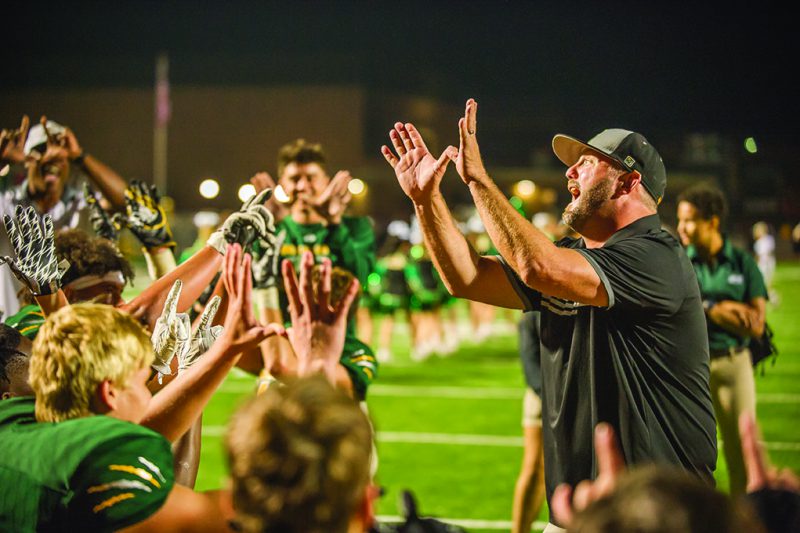 [dropcap style=”flat” size=”4″]O[/dropcap]n Aug. 19, with three minutes left of the football game, fans stood with anticipation as the Bruins neared their first season victory against Battle High School (BHS). With RBHS leading 17-14, Rockhurst intercepted the ball at their two-yard line with two minutes left. Crowds erupted in cheers as the clock ticked down the seconds to the first Bruin victory of the year.

“I’m personally very excited and optimistic about the season,” senior wide-receiver and cornerback Reece Jarvis said. “The team seems to have a great attitude and personality entering into the season.”

With a new season also came a new head coach. Van Vanatta, entering his 20th year of coaching, decided to come to Columbia after four years as the assistant football coach and three years as the head baseball coach at Central Methodist University. For the last 10 years, Vanatta was head coach for baseball and football at Hazelwood Central High School. Although he’s lived in St. Louis for a long time, he said moving to Columbia was not a tough choice for his family, including his son, freshman Max Vanatta.

“I know the tradition here at RBHS and love the Columbia area,” Vanatta said. “I know it is [a] great place to raise a family.”

Although Joe Collier, who was the interim head coach last year, is still coaching defense for the team, players can see the differences between how the team is run now compared to past years. Sophomore inside linebacker and kicker, Will Norris, says the Bruins run a different defense with Vanatta.

“[The new defense] seems to be working so far,” Norris said. “Having the old coach still with the team as a defensive coordinator is great. He pushes us to be better and limit our mistakes.”

With the season already on its way, Vanatta expects his players to do their job and to take care of the now and get better everyday.

“My expectations are to have each athlete believe in themselves, believe in each other and believe in the process,” Vanatta said, “same [goes] for the coaches.”

With the Bruins going 2-8 last year,  Norris believes in a fresh start and feels good about the new season. His confidence for the upcoming games comes from the hard work the team has put in everyday.

“Every week is tough with the schedule we have, but Battle and Jeff City will be tough games,” Norris said. “We just need to do our job and believe and we can beat anyone. We need to communicate more on the field. It’s important to talk to limit the amount of confusion.”

Already kicking off the season successfully with a 3-1 start, Jarvis says the ultimate goal is to win a championship either at districts, regionals or state. The Bruins successfully won their first three consecutive games of the season, and lost their streak on Sep. 8, against Lee Summit High School 21-27. Tomorrow the team will go against JCHS, 2-2, on home territory, with expectations of a victory.

“Coach [Vanatta] has done a fantastic job preparing our team for the season,” Jarvis said. “The team is focused on maximizing our potential, taking advantage of the mismatches we have each game and playing every opponent as a true team.”

In order to achieve the goal of a championship, Vanatta wants to focus on each game instead of just thinking of the big picture.

“I don’t think there is an opponent that we can take lightly,” Vanatta said. “Every week is a challenge and we will focus on one week at a time.”

Do you think a new coach will improve RBHS’ football team this season? Let us know in the comments below.

Expensive skin care is worth the splurge