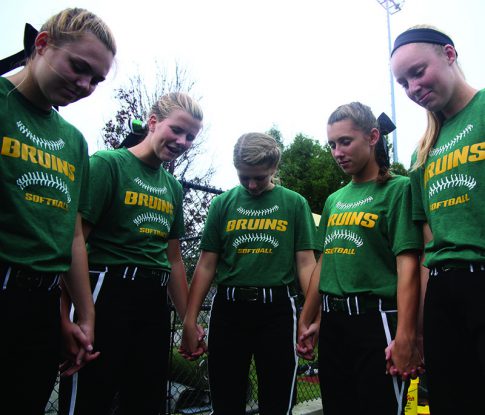 [dropcap style=”simple” size=”4″]B[/dropcap]efore every RBHS softball game this season, the team could have been found in a circle, hands held, praying for a safe and fun competition.

“We pray before games as a way to center ourselves,” sophomore Maddie Marrero said. “It helps me relax and get rid of my last minute jitters before stepping on the field…being able to say it together is really cool.”

Prior to September, the team’s coaches were included that circle, as well. Junior Gemma Ross, who participates in the prayers, said it was a way for the team, including players and coaches, to unite before competition.

“Although coaches had told players that it is not mandatory to participate in pregame prayers, most players have done it religious or not,” Ross said.

However, earlier in the season, the Human Resources department at Columbia Public Schools (CPS) informed the softball coaches that they are not allowed to participate in the praying, as religion expression can not include a public school faculty or coach.

On Sept. 12, The Human Resources department released this statement to all applicable softball staff regarding the team:

“…To the extent required by law, district employees or school officials shall not lead attendees of a district-sponsored event in prayer or any other religious ritual, nor shall they direct, whether implicitly or explicitly, a student to lead attendees in a prayer or any other religious ritual. However, this policy shall not be used to deny any student, employee or district official any personal legal right of expression.”

In other words, neither CPS coaches nor staff can participate in pregame praying, but students and coaches may continue to pray separately from each other. Ross said this split has caused disunity among the team.

“Although this hasn’t changed the number of players who look to God before games, it has caused a slight upset due to both players and coaches being close to one another,” Ross said. “We are no longer able to do something that has brought us together in many ways before game time.

Similar situations concerning religious expression and school sports have sparked controversies across the U.S. for decades. For example, in Dunmore, Pa. the local football team had a tradition of a coach led prayer before every game, according to The Times-Tribune. Last November, however, an out of state civil rights group complained to the Dunmore school district, claiming it was illegal for the team’s coach to lead or participate in this prayer. The school system ultimately agreed with the claim, saying the law was clear that no coach or school staff member could take part in these prayers, breaking the team’s decades-long ritual.

While the problem at RBHS was not identical to the issue at Dunmore in that softball coaches did not lead the prayers,  the two issues have taken the same legal path.

“It was a decision by the athletes to conduct a team prayer prior to playing,” Head Coach Janel Twehous said. “The coaching staff only participated in the student athlete-led prayer.”

The Human Resources department still considered coach participation in the prayers unlawful, however, and players now must pray separately from their coaches.

Despite the upset the change has aroused, players such as Marrero still understand why the state and school district have an obligation to keep religion separate from public school affiliations.

“[CPS] has rules regarding praying because they want to be considerate to people who have different religions, or people who don’t practice religion,” Marrero said. “It makes complete sense, I don’t think anyone wants to change anyone’s beliefs, we are just there to play the sport we love and have fun…It’s always understood on my team that you never have to pray if you don’t want to. The rule comes from wanting to make sure people’s different beliefs are protected.”

Marrero recognizes the importance of uniting as a team before games, despite the fact that coaches are no longer included in their shared word to God. She hopes the change in the warm up routine will not affect their ability to be connected and close with one another on the field.

“Our coaches try their best to let us do our thing and not interfere,” Marrero said. “Most of our coaches are religious people so they understand how important praying is for us. Even if they can’t be a part of the praying, they are a part of our pregame pep talks which are just as important in getting us centered and ready to play as a team.”

Do you or your team participate in pre-game prayer before a game? Let us know in the comments below.

I think it’s really interesting that this practice developed in the first place, but I have to say I agree with the decision to ban school-sponsored prayer, as often it could be seen as a state-sponsored exclusion of people of other faiths.