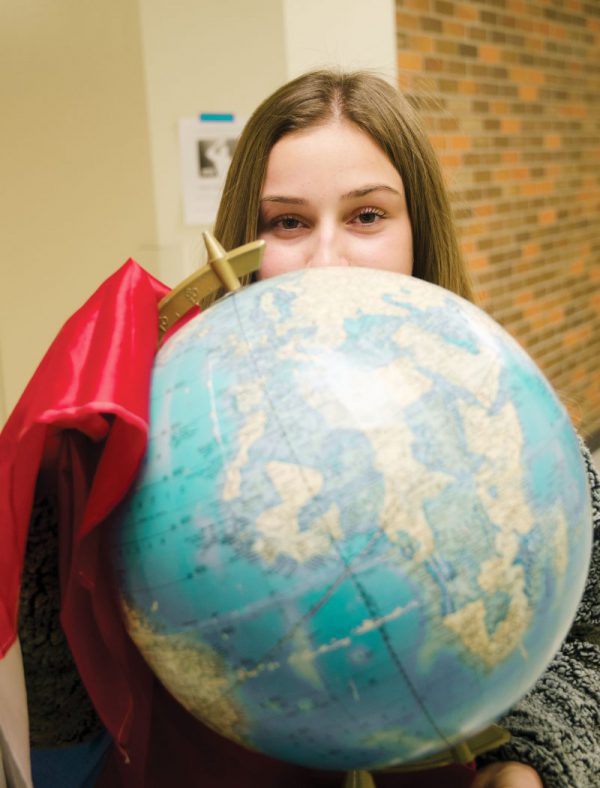 Senior Marine Caron from Tours, France, is an exchange student through the Rotary Exchange Program. Photo by Camryn DeVore

[dropcap style=”flat” size=”4″]F[/dropcap]or some individuals, leaving home to live in another country can be a scary. With new languages, customs and people, studying abroad can seem like being in a completely different world.

Despite these fears, Spanish teacher and former Rotary District 6080 Outbound Program Director Krisleen Arthur believes being in a rotary program would benefit everyone and would allow people to gain a greater understanding of the world.

“Living outside of your culture and comfort zone leads to great growth,” Arthur said. “Learning a language and different set of cultural norms is always a good thing. With that being said, however, I’m well aware that some personality types aren’t made for all types of experiences.”

While someone shy might be less confident to live in a different country, 2017 alumna Katherine Sarafianos says studying abroad is an opportunity no one should turn down. As a junior in high school, Sarafianos didn’t know what she wanted to do other than go to college. Her perspective changed, however, after she started talking to then senior Megan Goyette, a 2016 graduate. Goyette’s plans to a gap year before college fascinated Sarafianos; she planned to travel to India through a service organization and learn Hindi to help women and children at a local community center.

Having taken French class all throughout high school, Sarafianos applied to study in various European countries her senior year. Although some countries do not let 18-year-olds in their high school Rotary Programs, Belgium was an exception and the perfect choice for Sarafianos.

“I knew I wanted to learn French [because] my dad is multilingual and so is his family, which I’ve always really admired. [Belgium] is a very small country, so travel is incredibly easy,” Sarafianos said. “Living in Columbia for most of my life and assuming I’d stay in the U.S. for most of it, it’s amazing to me that I’ve traveled a lot so far.”

Sarafianos loves the freedom she has in Belgium because she can speak enough French to communicate the basics. Already Sarafianos has been to Belgian cities of Bruges de Panne, Mons and Liège and plans to go to Narbonne, France, Italy and Greece.

Unlike Sarafianos, junior Alison Scrivner decided to study abroad before leaving RBHS. Living in A Coruña, Spain, leaving the United States was not a nerve-racking idea for Scrivner. Her interest in traveling, learning about the world and being bilingual drove her to join the rotary program.

“I can hold a conversation with someone now in Spanish after being immersed into it because nobody speaks English,” said Scrivner, who will be in Spain until July, “and it’s the best feeling ever.”

The Columbia Rotary program exchanges American students with others from different countries who want to come here to learn English and discover American culture. Scrivner got the opportunity to go to Spain because senior Marine Caron from Tours, France wanted to come to the United States. Through the exchange program, the two high school students switched countries.

“[Studying abroad] is a good experience. I think it’s the best [time] of my life, and you can meet many people,” Caron said. “In France, when you see the U.S.A., it [seems] like [one of] the best [countries], [It’s very beneficial if] you can speak English, which is very important when you work in France or if you go to another country and work, like the U.S.A. or Australia or England.”

Arthur understands how living in a different country can leave an impact on a person. She has studied, lived and traveled in Monterrey,Mexico; Toledo, Spain; Quito, Ecuador, Sucre, Bolivia, Costa Rica and Piura, Perú.

[quote]“When a person travels and lives abroad, they double their world,” Arthur said. “If learning a second language is involved, it deepens their integration into the language; it expands their understanding of the culture. A person will be changed forever by what they experience living abroad; understanding a different family norm, cultural norms, [and] language differences. The confidence one gains from traveling the world and navigating this planet is phenomenal.”[/quote]

The differences between countries can be eye opening; Scrivner has noticed a lot of differences between America and Spain. She says everything in Spain is late. For example, lunch is at 3 p.m., and dinner is at 10 p.m. Food portions are smaller; school is shorter, and families rarely go out to eat.

“The cars are all very tiny and stick shifts,” Scrivner said. “Everything is smaller, like to buy a coke anywhere they give you a little glass bottles, portions of food, people, everything [is smaller]. It feels like I’ve gone back in time a little bit. [Also], the people all take fashion very seriously. I’d never dare walk out in the street in a t-shirt and shorts here.”

Although getting to know the country’s culture is an important part of the rotary program, the main focus is school and learning the language. Caron and Scrivner both recognize the difficulty of taking classes that aren’t taught in their native language.

“It’s very hard. I’m getting better and can understand some things now, but I still don’t understand what’s being taught, but my grades won’t count this year, so I’m not stressing about it,” Scrivner said. “Also, my teachers are a big help here with everything, and they say that the main thing I need to learn this year is Spanish so not to worry about most things.”

What country would you study abroad in? Let us know in the comments below. If you would like more information on the rotary program check out this link.

Aerial yoga: art and athleticism together

Mistakes should be encouraged, not admonished

Meeting students that are studying abroad is interesting just to see how their viewpoints of the world differs from mine. Its good to know that people who do study abroad are able to get over hurdles such as shyness and culture shock and just have a great experience.

I didn’t know students from Rock Bridge could do the rotary program. I’ve always wanted to study in France, but I didn’t know I could do it before college.

I’ve always wanted to travel abroad!! I think it so cool that we have the privilege of going to other countries and experiencing their culture and education style. I also think its awesome we have teenagers in the foreign exchange program.