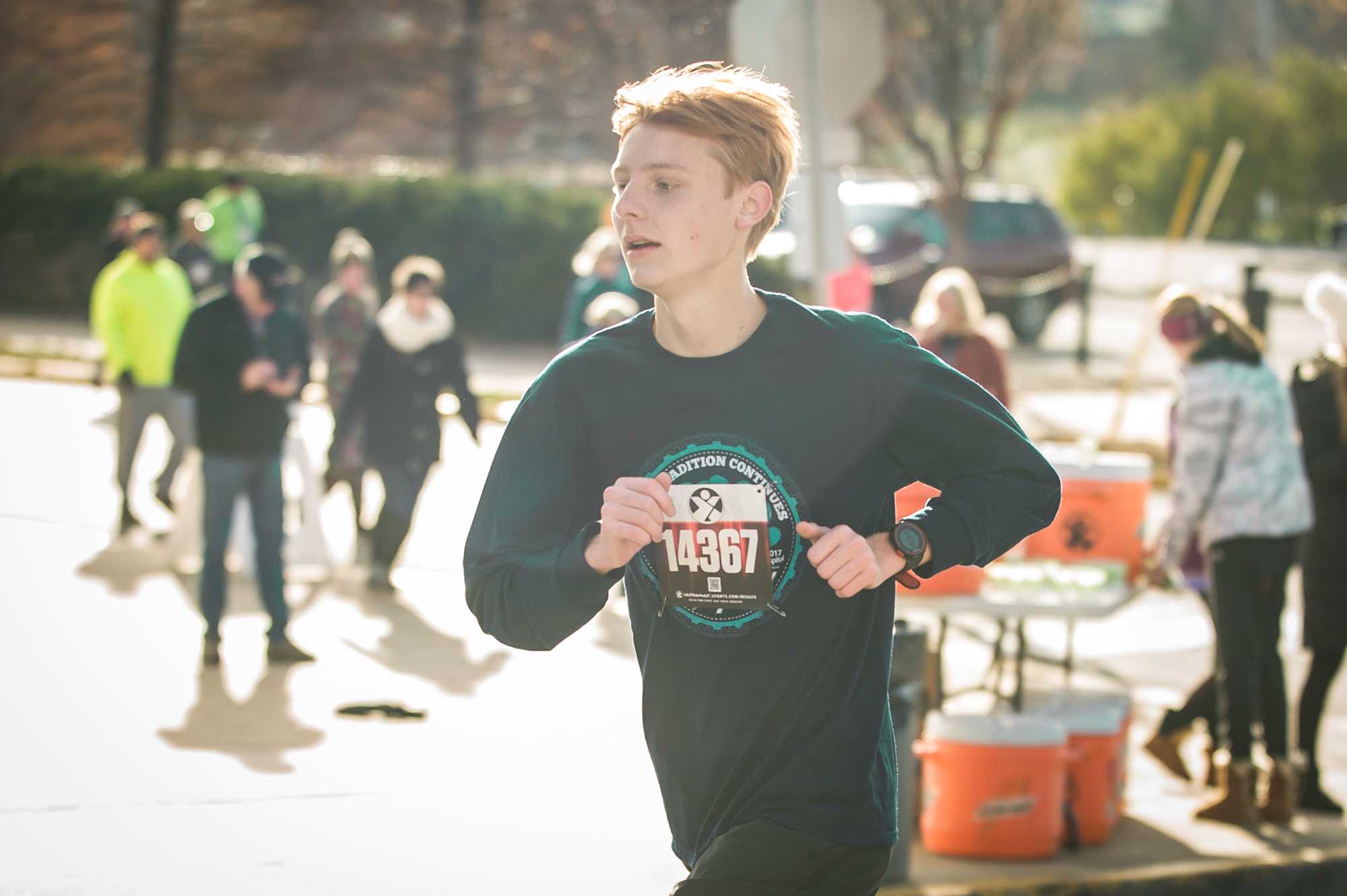 Senior Kevin Kiehne passes the aid station approximately two and half miles into the Turkey Trax Run on Nov. 23. Kiehne finished tenth overall out of the 1,282 participants this year. Photo by Yousuf El-Jayyousi

Most people think of Thanksgiving as a day of food and family, however, for many people in Columbia, Mo. the holiday has also become a day of running. According to Runner’s World, in 2011, Thanksgiving Day became the most popular holiday and the number of participants grew by 11 percent from 2014 to 2015 in Thanksgiving Day 5k’s alone. This growth isn’t just represented nationwide, it’s local as well.

Since 2010, Ultramax Sports has put on a 5K in Columbia entitled Turkey Trax. Starting with only a few hundred participants in the first year of the event’s creation, the race has grown exponentially, with more than four times the amount of people completing the race this year.

The race began at 8:30 on the morning of Thursday Nov. 23, starting downtown in the direction of the Hitt Street parking garage. After a ten second countdown, the 1,300 participants began their 3.1 mile trek around downtown and the University of Missouri campus. For many RBHS students, this annual 5k has become not only a Turkey Day workout, but a Thanksgiving tradition that they will continue to participate in for the year’s to come.

For junior Jillian Barnett, the race proves as an opportunity for her to run with her family, and more specifically her dad. She loves the uncompetitiveness of the race, and thinks it makes the race more enjoyable for the community.

“I’ve run Turkey Trax in the past and really loved the atmosphere, I started because it was something fun my dad and I could do together,” Barnett said. “This race wasn’t really competitive for me, I knew I wasn’t going to be top three in my age division so I decided to make friends during the race and stick with them, while pushing myself.”

Much like Barnett, for senior Kevin Kiehne the race has developed into an annual tradition, both for him and his family to partake in. The non-runners in the Kiehne family train for the event, trying to see how they can improve. Despite the family aspect of the race, Kevin Kiehne enjoys seeing how his family compares to him during the race, adding a little inner family competition.

“I have ran in Turkey Trax for six years with my family.” Kiehne said. “The rest of my family not going through the Rock Bridge cross country  training, they train on their own for this event. At the end of the race, it’s fun to see how we all do as a family.”

Sophomore Jack Stevens sees the event not only as a tradition, but as a way to run with his friends. With the year dwindling week by week, Turkey Trax is a way for him to have fun running with his RBHS teammates and friends from cross country, and also serve as an unofficial end to the season. The race has become an annual tradition for him, and one that he will continue to take part in for as long as he can.

“This is my third time running Turkey Trax, and I have no idea why I started, but now I do it as one last race with the cross country boys before track truly kicks in.” Stevens said. “Racing is a huge part of my life and I usually perform well so it’s just another good thing to do on Thanksgiving. I’m thankful for my ability to run.”

In addition to having fun with friends, Stevens competes in the Turkey Trax event to see how his physical strength has changed after the short time since the cross country state championships took place in early November. To Stevens, it’s a good way to see how his off-season training has made an impact on his performance, along with wanting to see if he is doing everything he can to make himself a better runner.

“It’s a good middle race to see how my off-season training is going.” Stevens said. “Running a 5k a few weeks after state and seeing how times compare help me see if I’m still in good shape and if I am on the right track.”

Ultimately, Barnett views Turkey Trax as a way for the community to get together for a good cause, with all of the registration fees going to Boone Hospital. She sees how this one 5k is special to more than just runners, but it is a special opportunity for young kids and families to enjoy and participate in.

“Turkey Trax isn’t just another race for me because the atmosphere and the people running are so motivating to enjoy running and makes it seem like it isn’t a chore to go for a run.” Barnett said. “This race is important for the community because it brings everyone together to run and get some exercise before partaking in the typical Thanksgiving meal.”

Boba’s popularity on the rise in Columbia