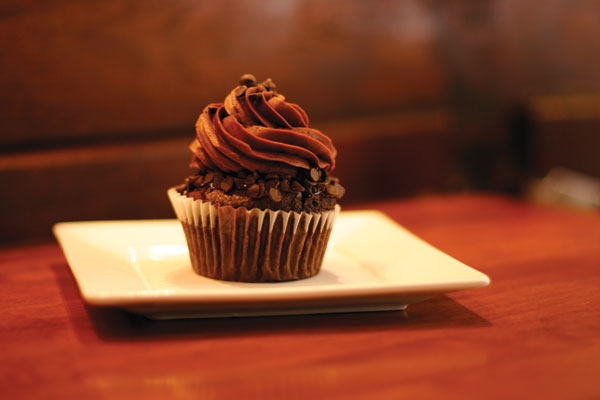 One of the treats at the Velvet Cupcake. Photo by Maria Kalaitzandonakes

As festivities such as Christmas, Hanukkah and Kwanzaa draw nearer on the calendar, expectations of sugary treats begin to emerge. Homes fill with the aromas of peppermint, molasses and warm buttery pastries, enriching the holiday atmosphere. Bakers, professionals and novices alike, use creativity and precision to construct gingerbread people, fruit pies, cakes and more.

Junior Laura Scoville celebrates and connects with her rather distant family by spending hours in the kitchen baking treats for relatives and friends. Scoville said baking brings her closer to her dad and is a healthy outlet for stress.

“Sometimes during stressful times, it’s just fun to come home and bake with my dad,” Scoville said. “I really enjoy having talks with him that we wouldn’t otherwise have while cooking, and the outcome of it all is great, and I’m proud of what I can do in the kitchen.”

Scoville, over time, has come to appreciate what baking can do for her.

“I used to dread and hate being in the kitchen with my bossy dad on my weekends,” Scoville said. “But, now I truly enjoy it.”

Like Scoville, senior Sam Ventrillo uses cooking as an outlet for stress. Ventrillo began baking to explore “the other side of culinary,” he said. When he was already invested in cooking and worked at a restaurant, he decided to go further and learn how to bake, especially holiday sweets.

“I wanted the knowledge of baking, as it is very different [from cooking], and knowing all the methods helps me to understand all food-making processes,” Ventrillo said. “It allows me to do a lot more creative things.”

Career Center culinary chef Katie Frink thinks baking is great for students despite the unhealthy consequences of consuming so much sugar and fat. She said that because baking provides long term benefits, the positive outcomes outweigh the negative side effects. Frink loves holiday baking and wants to share the stress reliever with students.

[quote]The holiday fat is only there for a short period of time. It’s only a month out of twelve months of the year,” Frink said. “It’s centered around a lot of traditions, and baking can be very therapeutic.[/quote]

Frink concludes that certain activities such as kneading dough and measuring ingredients distracts from other overwhelming responsibilities.

“Bakers use a lot of science behind baking, and I think it’s good for students to explore different outlets for stress,” Frink said.

Although for some people baking is a healthy retreat from daily burdens, research shows that holiday baking may not be the best for physical health.

A new study, led by Cornell’s Food and Brand Lab as well as scientists in Finland and France, looked at year-round weight patterns of nearly 3,000 people in the United States, Germany and Japan. The results found that participants’ weight gain peaked 10 days after Christmas and, on average, people gained 1.3 pounds.

Despite this information, both Scoville and Ventillo believe their hard work pays off when they get to do something they love.

“Holiday baking is always a positive thing for my health, I feel,” Ventrillo said. “Being busy cooking many things, I usually work pretty hard on makes up for indulging on it later.”

Scoville has a different opinion on why it’s not unhealthy to bake. She believes the homemade treats are more generous to the body than store bought foods.

“I do feel myself gaining a little weight after the holidays, but when you buy something from the store it usually contains many chemicals and preservatives that are bad for your body,” Scoville said. “Not only do you not work for the food, but you also don’t get the homemade health benefits from baking from scratch, which is why baking it yourself is much more beneficial.”

Although the topic of holiday weight gain comes up every year, research has found that the phenomenon is more a myth than a reality. Some scientists believe the topic is greatly exaggerated in the media and pop culture, according to an article by RealSimple, a health and lifestyle website. In a 2013 study from Texas Tech, for example, participants gained only about a pound and a half between Thanksgiving and New Year’s.

“No matter what, making a bunch of heavy desserts isn’t amazing for your health,” Ventrillo said. “But earning it through work at least makes it rewarding.”

No time like the present: Capitalism threatens holiday traditions

Out of Line: Holiday lights