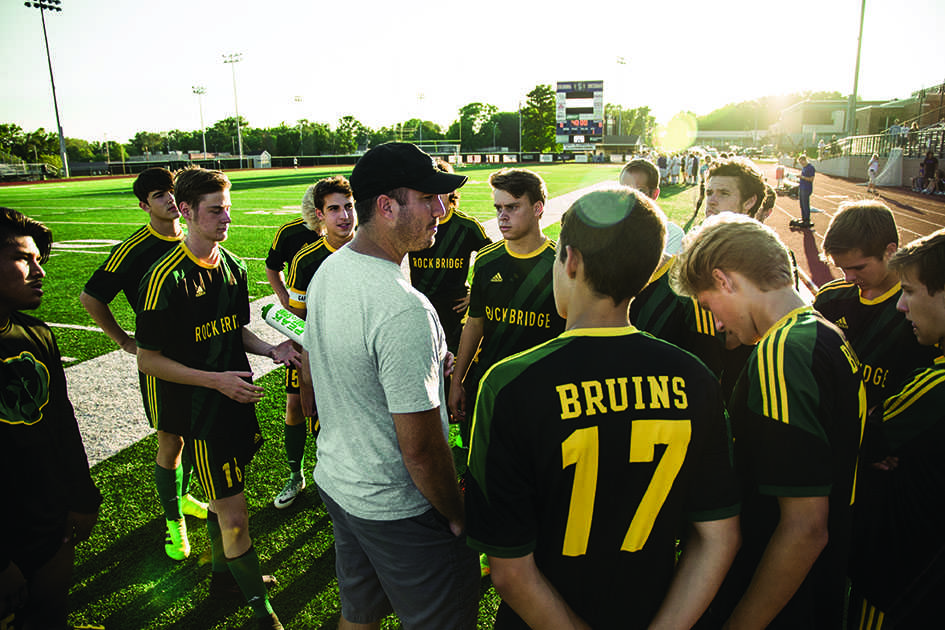 [dropcap style=”simple” size=”4″]T[/dropcap]hink of America’s winningest sports teams: The Golden State Warriors. New York Yankees. Los Angeles Lakers. What made them so great? Was it the once-in-a-lifetime elite athletes, a brilliant coach or a fan-base unmatched by their competitors?

Wall Street Journal editor Sam Walker expected at least one, if not all three of these to be true in his investigation of some of the world’s greatest and most successful professional sports programs throughout history. Walker’s investigation left him both shocked and enlightened. These teams didn’t have incredible coaching staffs, similar grade point averages or even a group of star athletes. What these teams had in common was a great leader. A study conducted by believeperform.com shows whether or not a team has a designated team captain, there is always one person or small group that assumes the leadership role.

Over the years, RBHS has always had a top-tier athletic program, consistently competing well at the highest level, winning 30 state championships in the last ten years, a number matched by very few competitors. While the championship titles lead many to believe that RBHS won the athletic lottery, varsity leadership is another thing that makes the Bruins rise above their competitors.

Though head football coach Van Vanatta only recently finished his first season at RBHS, his 9-2 record compared to last year’s 2-8, proves that his coaching style is effective and revolves around something special. Vanatta focuses his efforts on keeping order within the unit, and the only way he says this is possible is through captains.

“Having a leader is important to the success of a team because it ensures everyone is on the same page,” Vanatta said. “Especially in places or situations that deal with adverse situations.”

An effective team leader has the ability to earn the trust and respect of the team and stimulate a production unmatched by a team without a leader, a study by www.smallbusiness.chron.com shows. The football team has managed to do just that, Vanatta said.

“The leader on a sports team can work in a variety of ways, Vanatta said. “You can have the guy who is always upbeat and talks to them team to keep them in check.  You can also have a guy who leads by example and his actions, or you find guys who do both.”

Senior Matt Hall is co-captain of the RBHS varsity football team alongside seniors Evan Ratermann, Reece Jarvis and Don Hammers. After earning his role on the team through a unanimous vote by the coaching staff, he appreciates his position and works hard to keep the team dynamic strong.

“Seeing and knowing how hard I worked to become a captain and how others look [up] to me for being a captain makes it all worth it,” Hall said. “Also, seeing how I am able to be a mentor to my younger teammates and put them on the right path by leading by an example is also very rewarding.”

A team leader is defined by study.com as someone who provides direction, instructions and guidance to a group of individuals, who can also be known as a team, for the purpose of achieving a certain goal. Hall feels his role of leading by example keeps a sense of brotherhood on the team.

“Encouraging people is one of my main roles on the team,” Hall said. “Logistically, captains talk to the referees and go out for the coin toss at the beginning of the game. [We] also serve as the voice of the team when it comes to interactions between the officials and the team. We talk to the team before and after every practice and encourage the guys throughout practice.”

RBHS’ football program allows any student who tries out a place on the team, regardless of skill. With this being said, the football roster has consistently been large over the years, which alters the way the captains must lead.

“Being a captain for the football team is a unique experience,” Hall said. “The difference between football captains and those of other sports is that you are responsible for more teammates and the referees usually direct the captains on the field for decisions regarding penalties and other things which is different from most sports.”

Similar to the football team, leadership on the softball team is based upon seniority. Columbia Independent School (CIS) co-op student senior Alexis Burks is also co-captain of her team, RBHS softball, alongside senior Bailey Devlin.

“Team captains are elected and expected [to lead] based on rank,” Burks said. “It is typically expected that the seniors are the leaders because they have the most experience and know the way that things should be done.”

While Burks also works hard to lead her team as a senior, she believes that there are younger leaders on the team that are capable of leading the team in a different way than the seniors.

“We have some really talented underclassmen that are very clearly natural-born leaders,” Burks said. “Our coaches are really good about taking everything everyone says into consideration and not just nixing someone because they aren’t a designated leader.”

One of Burks’ assistant coaches, Lauren Fuller, agrees that a leadership role needs to be filled on the team. She says that leaders provide the link between coaches and team members. Relationships between athletes and their leaders can have a unique and impactful influence on the team.

Although softball typically has seniority take precedence when it comes to leadership, underclassmen are able to use their voices to step into leadership roles. Another type of leader that Fuller acknowledges is a vocal leader. These, Fuller says, are usually a diverse group of people, ranging from freshman to senior. A study by believeperform.com proves that some have the inborn quality of leadership while others develop the quality over time.

“I believe that vocal leaders are developed over time. In order to be a successful vocal team leader, you must first learn to lead yourself,” Fuller said. “After being able to successfully lead yourself, you can become a strong leader by example. This is someone who other teammates strive to be like, but not someone who necessarily voices their leadership. While I do think people mature through these steps of leadership at different rates, I believe leaders should emerge rather than necessarily be appointed based on rank. There are some athletes who rarely step on the playing field that can make great leaders. Each leader must have the respect of their peers and teammates before being expected to successfully lead the team.”

“People begin to act for the roles that they have been given,” Alexander said. “If elected as a team captain, that person may naturally begin to act more like a leader on and off of the field since they hold a title that requires them to display these characteristics.”

Alexander is describing the cognitive dissonance theory, which states that we align our attitudes with our actions. If someone were to be elected as a team captain, they are more likely to begin displaying those leadership traits. Their attitudes will begin to reflect their actions and they will eventually see themselves as a leader. This naturally allows that individual to more effectively hone their skills and perform as a better leader.

Psychology proves time and time again the importance of a team leader to serve as a solid foundation for a group of teenagers that are growing both as people and as athletes. An effective leader can not only elevate morale but reverse a negative season and high school sport experience.

“Having a leader definitely helps,” Burks said. “It gives the team someone to look up to and turn to when they need help or advice and don’t want to go to the coaches. It also adds reassurance in each other throughout the team knowing you’re on the same side.”

Which do you prefer, elected or appointed team captains? Tell us why in the comments below.

Letter To The Editor: Student Council

Don’t Lose Focus: Taking it to the streets