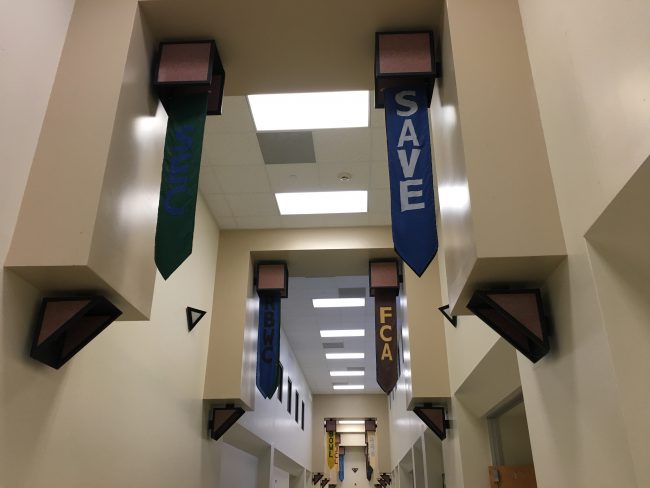 Flags line the edges of the main halls of RBHS, swaying silently no matter the amount of students walking below them. These banners represent every club at RBHS, ranging from Zombie Defense League to Rock Bridge Reaches Out. The two clubs are only two among the 60 offered at RBHS. With this large amount and diversity among the clubs, students have an opportunity to find what they’re passionate about.

For junior Piper Page, her passion resided in her involvement in Giving Girls Opportunities (GGO). There, she found an outlet to make a difference and give a girl in another country an opportunity to get an education.

“[Education] is an opportunity [our sponsored girl] would likely not get unless she has a little help,” Page said. “There are dozens of organizations around the world that attempt to make this happen, so we partner with one of them per year, raise money and send the money to a school for the girl we sponsor.”

In order to achieve fundraising goals for the sponsored girl, GGO members meet every Wednesday in order to pitch new ideas on how to make money and discuss the reasons they come together. GGO has 54 members in the club Groupme, though only about 15 attend each meeting, Page said.

Despite this difference of 34 people, Page still feels pretty good about the turnout, though it’s not as many as she would hope. The people who do come, however, are engaging and have fantastic ideas, Page said.

“Wednesday is a busy day for a lot of people with sports and other clubs and prior obligations,” Page said. “I would hope people don’t just not come [to GGO] because they don’t want to.”

Likewise, the difference in numbers from club Groupme members to actual meeting attendance is low for many clubs. For example, RBHS Young Democrats has 127 members in its club groupme, though only about 24 percent of those people actually attend the meetings, said club sponsor Gregory Irwin. Despite this drop, Student Activities Director Hannah Casey said there is not a limit on how many clubs a student can join.

For senior Sonya Hu, her decision of which of the 60 clubs she wanted to join came from a number of influences. Hu joined some clubs out of personal interest in the topic or activity, but she joined others because her parents pushed her to, such as the honor societies and clubs based on academics, which would bolster her college application. As a member of 12 clubs, Hu finds the best way to schedule time for them is to set her priorities for what she’s most passionate about.

“Sometimes you may not be able to attend every meeting of every club, but that’s OK,” Hu said. “Maybe just go every other meeting or once a month. The benefit of the club is proportional to how much work you put into it, so you put more into the things you care about.”

Although Page understands the appeal of clubs on a college application, she believes if someone doesn’t care about a club, then there is no point in being in it. With so many club opportunities at RBHS there’s a way for everyone to find something they’re interested in and even if they can’t attend meetings, still contribute to, Page said.

“I really found myself and my voice in these clubs, and they really allowed me to find what I’m fighting for and why I’m fighting,” Page said. “Whether we want to believe it or not, this world is unequal. I’d rather be the one fighting to change it than watching it change. Networking is a huge part of my life, and I wouldn’t be able to know all the people I know and have all the opportunities I have without my clubs.”