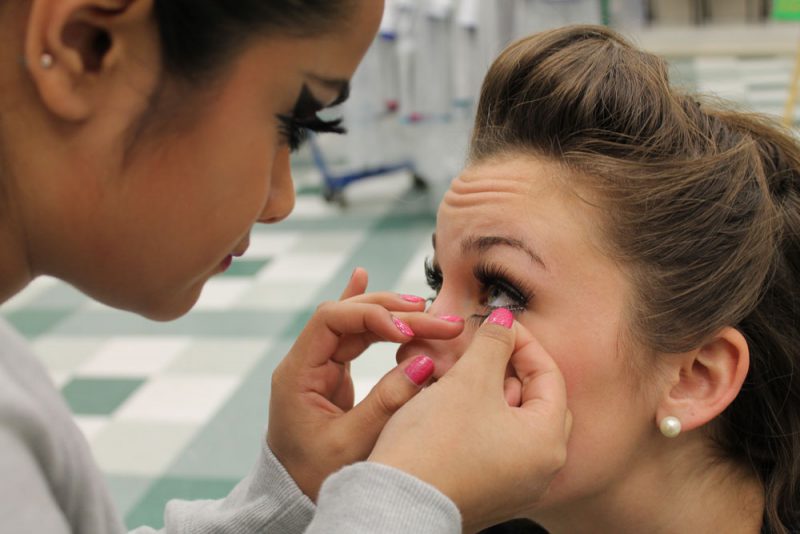 [dropcap]T[/dropcap]he lights dim and curtains begin to open. But this time, the performers on stage are elementary and middle schoolers. On Dec. 9, the annual Camp Show Choir was held at RBHS, where third to sixth graders from across town attended the full-day event.

Participants learned a song, and dance and performed for their parents at the end of the day.  Additionally, they received a “Camp Show Choir” shirt and a keepsake DVD with photos and videos from the day. The kids also played games and learned how to do show makeup, junior show choir member Lexie Hayes said.

“The turnout was awesome,” Hayes said. “We had so many kids this year, and they were all so sweet. [I am] so glad that we all had the chance to show them what show choir is all about.”

Junior show choir member Dani Barnes said there were around 80 kids this year, which was more than expected. But it was great to see so many kids come, learn and have fun, Barnes said.

[quote]“[The kids] love all of the dancing and music, and they love getting hair and makeup done,” Barnes said. “They have a lot of fun.”[/quote]

In addition to the children who were able to take away new music and choreography, senior show choir member Hannah Weber believes she learned from the experience as well.

“Getting to work with young kids is super fun because, for me, it allows me to see a different perspective with each kid I talk to,” Weber said. “They think really creatively, and most of them are enthusiastic about trying new things, which I think some of us high schoolers can learn a little from. They think more simply as well and tend to just let go and have a lot of fun in what they’re doing. It helps me to realize that just letting loose and enjoying your day can be a key to being happy.”

Furthermore, Barnes also believes something like Camp Show Choir helps show choir members themselves appreciate their group even more. Barnes said sometimes they can get so focused on the vocals, competition and making everything perfect rather than having fun.

Upcoming events in the choir department include a RBHS Choral Concert on Dec. 11, along with “A City Lights Christmas,” which will take place at RBHS on Dec.15. Additionally, there is a show choir festival on Jan. 18, during which large school, small school and unisex divisions will compete. At the competition, there will be a full judging panel, clinicians, preliminary and finals rounds. But until that next competition, Barnes is thankful for the opportunity to teach younger students about one of her own hobbies.

“We forget to smile, and we forget to really enjoy what we’re doing,” Barnes. “The kids remind us how to do that.”

Did you attend Camp Show Choir? Let us know in the comments below.