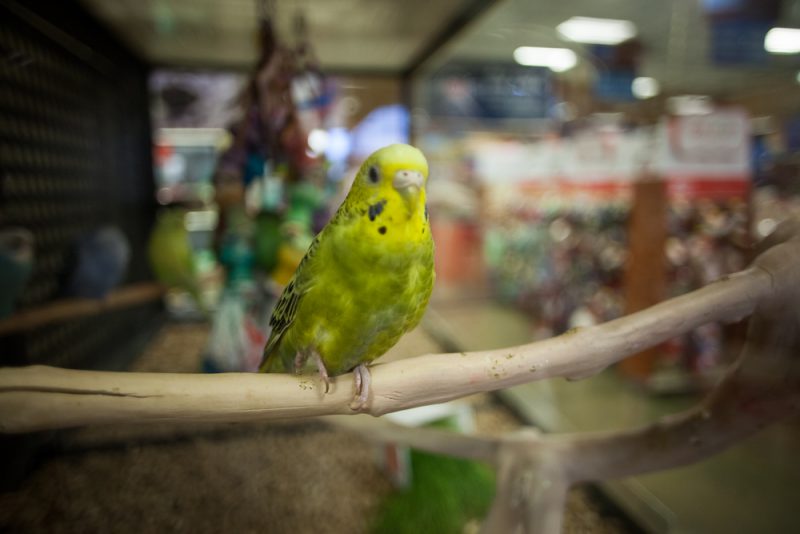 [dropcap]F[/dropcap]or most pet owners, feeding-time is a fairly simple process. All one needs to do is fill a bowl or two of kibble, perhaps shake out some fish food; nothing that’s too strenuous. For freshman Mackenzie Harvey, however, this responsibility is a whole other story. As an owner of two goats, three chickens, six rabbits, four dogs and a cat, Harvey takes 10 minutes to make all the rounds–and that’s after years of practice. In the past, her family has also owned fish, cows and pigs.

“[We have so many animals] because [my parents] had a lot of animals growing up, because they both grew up on farms, so they like them,” Harvey said. “[In the future,] I probably won’t have as many [pets] as I do, but I’ll have more than just a dog or a cat.”

Unlike Harvey, junior Beni Adelstein came across her unusual pet, a miniature horse named Spirit, more by circumstance than by parental precedent. After Spirit’s owners gave him up to Adelstein’s grandmother, he came to live in the pen next-door to Adelstein. Though he was initially antisocial, earning his nickname “Boo boo” for his tendency to bite, eventually he warmed up and became best friends with the donkey already living there. Adelstein appreciates the opportunity to have another animal to love.

“You get different aspects than from a cat or a dog, my friends are always really excited to see the pets, but for me they’re just like any other pet I have,” Adelstein said. “It’s really nice seeing them in their pen and you can ride the donkey, well mostly he just doesn’t move but you can sit on him.”

Though both Adelstein and Harvey take good care of their pets, with more unusual pets comes an increased risk that the owners either can’t or don’t know how to properly treat them. Rachel Grant, a member of the Animal Welfare and Behavior Group based in the United Kingdom, is especially focused on non-native and undomesticated pets. Grant and some of her animal research friends got together and wrote a paper titled “ExNOTic: Should We Be Keeping Exotic Pets?” which analysed the merits of adopting birds, reptiles and rodents.

[quote]“Outside of the usual cats and dogs, there seemed to be a lack of knowledge of the level of care these exotic animals need,” Grant said. “[The other article writers and I] discussed how even common pets like rabbits may not be suitable pets in every circumstance as often they do not like being picked up and cuddled and they have extensive social needs.”[/quote]

Grant herself owns five parrots and most of them were rescued from the types of environment she warns about in her paper. Her main concerns are social isolation, flight restriction and unsatisfactory diets. Like all animals, birds require enough space to mimic their natural habitat yet only 50 percent have adequate room, according to The welfare and suitability of parrots as companion animals: A review. Grant concluded that smaller species of birds are both ethical and rewarding to keep, as long as their ecological needs are met. Similarly to Grant, Harvey places importance on the ability of the owner to properly facilitate animals.

“If you’re responsible enough to take care of [unusual pets] every day, and you have space for them, then [try it out,]” Harvey said. “But if you’re not going to take care of them and make them live in a little tiny space that’s not good enough, then don’t.”

Additionally, Grant sees a distinct line between suitable and unsuitable animals to keep as pets. In her eyes, there are exotic species that are challenging to take care of, and ones that are impossible to legitimately take care of.

“Clearly, wild animals such as non-human primates, big cats, etc. should not be kept as pets,” Grant said. “Unless the person has a zoo it would be almost impossible to meet their needs and, arguably, some zoos are not able to adequately care for these animals.”

What pets do you have? Let us know in the comments below.

Sights and sounds of Hot Chocolooza 2018

It is important to bring awareness to the necessary conditions and risks associated with domesticating otherwise wild animals in order to keep them as pets. I am glad Bearing News is getting the word out that sometimes the pet you want isn’t the best pet to have. I understand why people want unique animal friends, but I still think the needs of the animals should come before the owner’s wants.