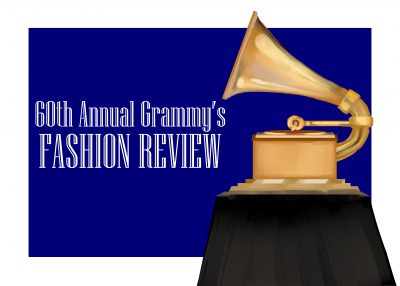 The 60th Annual Grammy awards were, as usual, a dramatic showcase of character and individuality. Aside from the talent demonstrated in a number of moving performances, stars displayed their creativity on the red carpet. Because the Grammys have this greater freedom of expression than one might expect to see from award shows like the Oscars or Golden Globes, artists typically take bigger risks with their wardrobes. This makes the pre-show spectacle both exciting and cringeworthy, as you’ll see in the looks mentioned below. Without further ado, let’s get into the best and worst dressed celebrities of the Grammy Awards.

At first, I wasn’t sure how I felt about actress Hailee Steinfeld’s pairing of a strapless white Alexandre Vauthier sheath with metallic, knee-high boots. The two initially seemed to clash; it’s like she had a movie premiere at 7:00 and a moon landing at 10:00. But the more I watched her grace the red carpet and later the stage while presenting, the more I came to like the sophisticated and futuristic elements of the outfit and how they complemented each other. The color combination of her purple boots and teal eyeshadow was especially striking without being overwhelming.

By now, if you’ve seen my Golden Globes style review, you know I love a polished black dress and an Angelina leg moment, and last night, Rita Ora gave us both. The singer impressed in a form-fitting gown by Ralph & Russo, as well as $3.6 million of Lorraine Schwartz diamonds. A white rose, worn by many stars last night to support the Times Up movement, adorned her right shoulder. Worn with a bold, burgundy lip and ‘40s movie star hair, Rita Ora’s classic dress stood out among some of the crazier looks of the night.

Five-time Grammy nominee SZA looked ethereal in a pale blue Atelier Versace dress, allegedly inspired by Cher. Others compared the gown to those worn by Kim Kardashian and Beyoncé to the Met Gala, but I think SZA’s version is much softer thanks to her flowy, voluminous hair. (Kim and Beyoncé both wore their hair in ponytails.) Her dress featured flowy tulle sleeves, a delicate beaded bodice and a leg slit. It shouldn’t have all worked together, but it did.

Though I preferred the tulle, pastel pink dress she wore during her performance of  “Joanne (Where Do You Think You’re Goin’?)” and “Million Reasons,” there’s no denying that Lady Gaga’s black, lacy Armani Privé bodysuit was an absolute #look. The contrast between her two outfits, as well as her matte, black eye makeup and pulled back hair, gave me Swan Lake vibes. The kicker, though, was the ballgown-like train that enveloped and fanned out around her body. Her trademark black platform boots added an edge to her look that only Gaga can pull off.

Although she lost the best pop vocal album award for “Lust for Life,” Lana Del Rey absolutely conquered the red carpet in a dazzling Gucci gown. The most ravishing part of her ensemble, however, was the literal halo of sparkling silver stars perched on her sleek, dark locks. The delicate crown, combined with the peachy, crystal embellished wrap dress and simple, feline-like makeup, bore likeness to the weeping Virgin Mary statues known for their melancholic beauty. Twitter users also raved over the look and noted its similarity to one worn by actress Hedy Lamarr in the 1941 film “Ziegfeld Girl.” Lana’s headpiece was much smaller than the one modeled by Lamarr, but she looked ravishing nonetheless.

There’s nothing much to say about this other than Pink looks like the offspring of Sesame Street’s Mr. Snuffleupagus and the Telly Monster in her Armani Privé gown. Honestly, I don’t think I would have hated it in a solid color. At least she didn’t over-accessorize.

Welcome to the 60th annual Viva Las Vegas rodeo! Does this make me an awful person? Look, I’m all for empowering women like Kesha, whose well-being and careers have suffered at the hands of monstrous sexual predators. Her performance was incredibly heartfelt and inspiring, and I’m glad that the singer can hopefully get back to living a happy life and making music. But her red carpet suit was just… no. It probably could’ve looked cool if the pants reached the ground, if her hair was pulled back and if the jacket was buttoned up so we couldn’t see that shiny, cheap-looking shirt. I’m not a fan of the sparkly boots, either. As an Old Navy employee, I’ve just seen too many 10-year-old girls begging their mothers to buy them the exact same shoes. But instead of a toned-down hairstyle and fewer accessories, Kesha opted for mafioso rings and extensions that were popular in 2011.

Comedian Sarah Silverman’s getup was, in a word, confusing. Looking at her knee-length Maggie Marilyn frock and the odd accessories she paired it with, I was more perplexed trying to figure that out than why comedians were even nominated for Grammys. The overall vision was like four-year-old meets woman in an punk band, which was made even more strange by her exposed cleavage. The big hair, the pearl necklace choker, the fishnet tights… could she be rebelling against her mom any harder? I guess I liked her boots, though.

Bruno Mars and Cardi B’s performance was one of my favorite acts of the night, but I can’t say the same for the rapper’s Moschino dress. For a custom design, its proportions just seemed off, making her shoulders look just as wide as the hem. Adding to the awkwardness, there was a train in the back, but it only reached the floor. It kind of just looked like a random white tree trunk taking up unnecessary space. And the thing is, her hair and makeup looked great, and this look could have been saved had the dimensions been different. Cardi B should have elongated the train maybe five feet and had it made in a lighter material. The off-the-shoulder sleeves (if they can even be called that) should not have come above her shoulders, and sandals would have been less clunky than her pointed-toe pumps.

If I didn’t know who singer Andra Day was before last night, I certainly do now because of her red carpet appearance. Unfortunately, that’s not a compliment. Although she helped give a moving performance of “Praying” with Kesha and a number of other women, Day’s look was overwhelming in a completely different way. Let’s start with the most obvious fashion violation: that Valentine’s Day-themed trench coat/dress/whatever it was. As if the matchy-matchiness of the red and pink garment wasn’t tacky enough on its own; Day wore it with red lips, red nails AND red platforms. I am red-y to burn it. And as if that wasn’t enough, the performer added what looked like four necklaces and a dozen rings to accessorize. I’m sorry if it seems like I’m totally dragging this woman. It’s not that she looked ugly; her outfit just looked matronly and out-of-date.

… about the Pentagon Papers?

I thought I was the only one who was a little disappointed on the creativity and overall appeal of her outfit. I got a real country/southern vibe and that’s not what Kesha has done in the past. HEr performance was amazing, as usual, but the outfit for the runway just left me scratching my head the whole night.