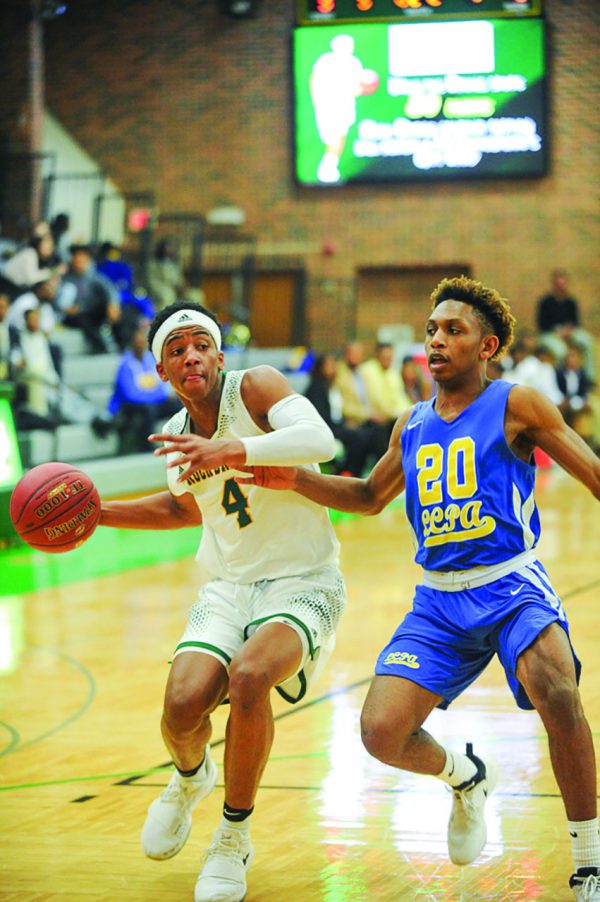 [dropcap style=”light” size=”4″]C[/dropcap]ousins by marriage, junior Travis Midgyett became friends with junior Ja’Monta Black during a family reunion on the Fourth of July eight years ago. Midgyett recalls watching Black shoot himself with a firework.

“Ja’Monta is 100 percent comedian. You can’t take him seriously … never,” Midgyett said. “He shot himself with a Roman candle, [and] I thought it was pretty cool, so I ran over while he was crying and started laughing and we’ve been best friends since.”
Standing at 6’3”, Black looks the part of a basketball player perfectly. Playing for RBHS’ varsity basketball as a guard, Black’s love for the game has existed his entire life.

Black started playing on competitive teams when he was in fifth grade. He began on the Columbia Warriors when he was in fifth grade and switched to the COMO Celtics. In a span of three years, from sixth to eighth grade, Black was on the MOKAN basketball team, the Blazers and Gateway. It was during this time on different club teams, that he met his friends and soon to be teammates, varsity guards, Dajuan Harris and Isiaih Mosley.

“I would say my favorite team was MOKAN, [because] that’s when I really learned a lot about basketball,” Black said. “I wasn’t really good at the time, but I would say that’s the point where my work ethic, and my love for basketball changed, and I gained more love for the game and playing basketball, because I realized how much harder I needed to work to be playing for that team.”

This mindset stayed with Black to high school where he earned a spot on the varsity team. Not only does Black say he loves the Bruins, but he also has the chance to play with his friends he’s worked with since middle school, Harris and Mosley. This friendship, Black says, has helped him a lot with motivation and to become a better player all around.

“Both of them [helped and motivated me] because they’ve been good since they were little,” Black said. “They’ve just been good their whole life and so just watching [those] two and playing with them made me a better player all around. They teach me a lot of things they know.”

Similar to most high school athletes, Black plans on continuing his high school basketball career in college. While he has not decided what school he would like to go to, he believes school is just as important as sports.

This mentality took place after a tough freshmen year, Black said. He took responsibility for his future and in order to stay on track academically, he decided to go to Cor. This organization was founded in 2013 by Angie Azzanni and Travis Craig. Their vision was to create “educational support with athletic involvement, experiential opportunities and caring relationships to help students achieve lives with character, community, and career.”

Cor works with more than 40 middle and high school students with a staff of 30 that help four nights a week. After teammate junior JaVell Sanders’ suggestion, Black started going to the program, the beginning of his sophomore year.

“It was really fun because when you get there you can have fun. You can have fun with your friends and stuff like that but when it’s time to work you can really start working hard and we can help each other with our homework and stuff like that,” Black said. “Cor is really helpful for athletes to focus and to just have a place where you can bond with your friends and work at the same time.”

While Black no longer needs Cor, he knows he always has support with Vicki Reimler. Currently living with her, Black says he has known Reimler for a long time.
Reimler has known Black’s grandfather for more than 25 years through West Middle School basketball and has known his mother for more than 20 years.

The arrangement to move in with Reimler was a whole family decision. Currently in the BHS district, they felt it was better for Black to go to RBHS and Reimler was their number one choice for Black because of her long and close relationship to the family.
Reiterating twice that Reimler is “a great woman,” Black sees her at every basketball game and gets support with whatever he needs from her.

“She just does everything for me, and she’s really taught me a lot,” Black said. “She’s teaching me a lot of lessons that I’ll need in the future like money and stuff, [and] how to save money. [She’s also teaching me] just how to be more like an adult right now. She’s just teaching me how to grow up and it’s really helpful.”

Watching Black’s growth in life, Reimler says he has shown great leadership on and off the basketball court. She also believes Ja’Monta recognizes how much his hard work in the classroom will benefit him in life.

“I believe Ja’Monta can be whatever he wants to be,” Reimler said. “He is smart, hardworking and disciplined. He is a great friend, has great communication skills and is confident. He possesses all the qualities that can help him be successful in his future.”
Midgyett, being friends with Black for eight years, also recognizes the exceptional character his cousin contains. With basketball, he said Black helps lead his teammates.

“As a basketball player Ja’Monta is a huge leader,” Midgyett said. “He’s a lights-out shooter when needed, he’s unselfish with the ball and always looking for opportunities to make the team better. He’s a team player.”