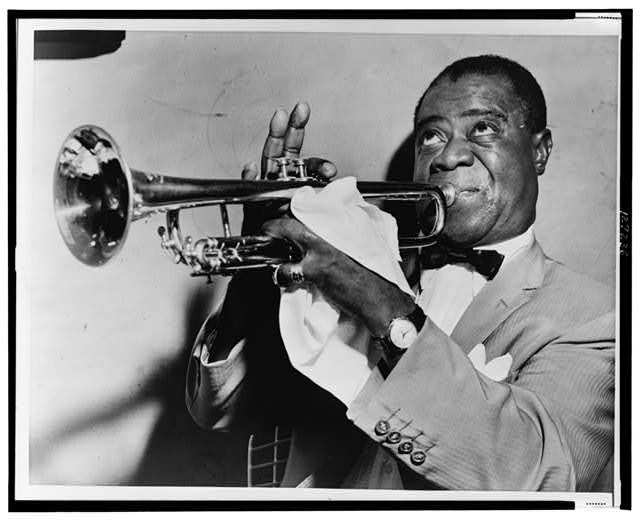 Trumpeter, composer and occasionally an actor, Louis Armstrong was one of the most prominent and famous African American musicians during the Harlem Renaissance. He is most famously remembered for being one of the most influential artists in not only jazz, but the entire music industry. Some of his famous songs include “What a wonderful world”, “When the Saints Go Marching In” and “St. Louis Blues.”

Born to a poor family in New Orleans, Armstrong started his performing career by playing with bands in small clubs around New Orleans, parades and even funerals. In 1922, an invite was sent to Armstrong to live in Chicago and play with a creole jazz band. Despite his prominence in the city Chicago, his stay only lasted two years, as he later moved to New York City to begin playing with the Fletcher Henderson Orchestra. It was during his time in New York City when he made a name for himself by playing on a Broadway stage. He famously took the song “Ain’t Misbehavin’”, and changed it into a jazz piece, which helped the public accept jazz as a music genre.

Armstrong’s career lasted a total of five decades from the 1920’s until the 1960’s. Along with playing jazz music, Armstrong’s gravelly voice which became iconic during his career. He influenced the music world with his uncanny ability to play the trumpet and his voice until his death in 1971 from a heart attack.

The jazz world will forever be influence by Armstrong, who taught people to appreciate the style during the Harlem Renaissance, which paved a path for other African American artists. He was inducted into the Rock and Roll Hall of Fame in 1990.

Chomping away at my sanity