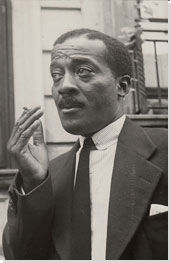 Born in Harlem, New York City in 1909, Norman Lewis was a painter of Bermudian descent. At the time of his birth, Harlem was a racially unbalanced neighborhood with a majority population of Italian and Jewish residents. He was one of the few African-Americans in the area; this environment would serve as the building blocks for Lewis’ upbringing and shaped his outlook on racism. Hoping to be able to visually show the everyday struggles of the African-American community, Lewis decided on his future career as an artist when he was only nine years old.

Lewis studied at the Savage Studio of Arts and Crafts, and was a student at Columbia University for two years afterwards. When he began his art career in 1933, his work consisted of figurative artwork with an emphasis on social realism. He used the latter specifically to depict discrimination in society at the time. His first paintings consisted of what he saw around him, from evictions to incidents of police brutality. Within a decade, however, Lewis ceased his pursuits in social realism, as he believed that it didn’t allow him to effectively depict social injustices and discriminatory acts. In his own words, “I am not interested in an illustrative statement that merely mirrors some of the social conditions, but in my work I am for something of deeper artistic and philosophic content.”

Lewis found deeper content in the Abstract Expressionism movement, which he embraced for years to come. At the time, Abstract Expressionism was a relatively young movement, and Lewis was the only African-American artist implementing that style. It was here that his most powerful paintings came to fruition. Lewis formed an incredibly unique style of painting, focusing heavily on the abstract. As stated in a press release by the Michael Rosenfeld Gallery, Lewis’ style consisted of “calligraphic, fluid forms suggestive of groups of figures engaged in kinetic activity.”

In the 1960s, Lewis created the Spiral group, a handful of artists who attempted to discuss the massive potential African-American artists had to convey racism and discrimination at the time. Although short-lived, the positive racial impact it had on the art world was significant.

Because of his skin color and his involvement in politics, Lewis was widely disregarded as an artist and few paid attention to his work. Throughout his career, several art exhibitions overlooked him, some of which were for mainly white artists. Many African-American galleries also rejected him, as his artwork was extremely abstract and couldn’t fit into either category; his work rarely sold in his life. As a result, he had to support himself and his family by teaching. It was only after his death that Americans were able to fully capture the power of his work, and were able to recognize his legacy. One of his paintings sold for $800,000 at the Swann Auction Galleries in 2016. The hardships he faced as an African-American artist, along with his incredible painting style, make him one of the most inspiring figures in black history today.

Below is a digital copy of Phantasy II, one of his most recognized pieces of abstract work.