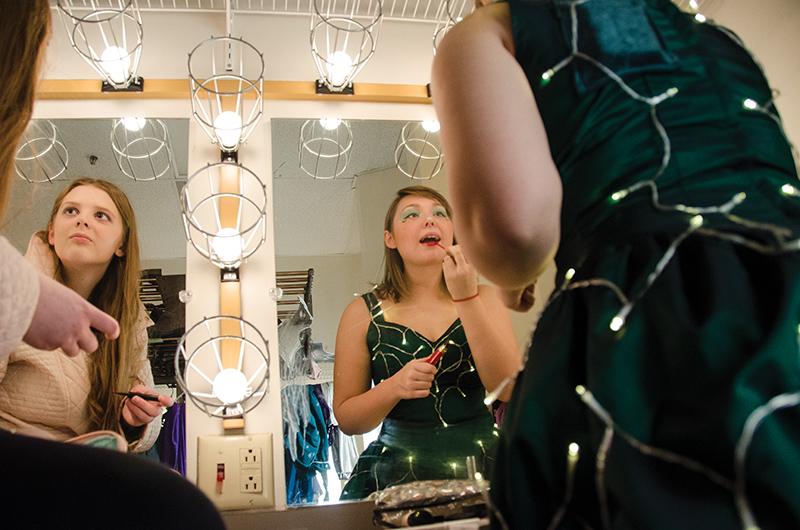 [dropcap]W[/dropcap]ith a clash of swords and a chorus of boisterous roars, a group of characters jumps back from the pirates, egging their leader on with excited whoops and encouraging cheers. Their leader, dressed in the classic forest green shirt, lunges toward his opponent, a brash smirk on his face. Then the director yells for a change in lighting, cutting the scene short.

One of the members of the group, freshman Kellen Sapp, adjusted his shirt, as it was starting to itch. Though it was late in the night and he’d been practicing for four hours already, he was thrilled for the upcoming scenes.

“I was really excited [that we’re doing Peter Pan] because it’s such a fun story. Captain Hook is a wonderful villain, and Peter is such a relatable hero because he wants to always remain a child without the responsibilities of growing up,” Sapp said. “All the rest of the characters are so exaggerated and colorful that it would be a joy to be any of them.”

For drama director Holly Kerns, Peter Pan was the perfect fit for the winter play, as she knew many students were interested in participating, and there are many roles in Peter Pan students can play. This show, however, will differ from Disney’s version of Peter Pan since Kerns used the original James Matthew Barrie script from 1928.

[quote]“I chose Peter Pan because it is just so much fun. I knew that it would allow for me to cast a lot of students because the show calls for a large cast, and I knew that we could really enjoy working on this. The characters are quirky and delightful; the story is magical and invites going big with performance choices, and even the stage directions have exciting and challenging language,” Kerns said. “We are modernizing the timeline for the show. Also, this show predates Disney’s version of it by many years. I wanted to bring the original show to the stage and escape some of the Disney stereotypes of the show.”[/quote]

This magic is often brought to the stage through enchanting costumes and fantasy-like makeup.  For junior Brenna Cornelison, aside from wearing a light-up fairy dress, she is most excited about meeting the audience afterwards.

“It’s a play based off of a children’s story, so I’m sure there will be lots of kids who come to see it,” Cornelison said.  “It’ll be amazing to bring to life something that they’ve probably only seen on a screen or in a book.”

Junior Jocelyn Heimsoth admires Peter Pan no matter if it’s Disney or not. After the announcement of the play title, Heimsoth hoped desperately that she’d get the part of Wendy, which she did after doing well in her audition. Playing Wendy, she said, is like a dream come true.

“One of the things that’s very interesting about Wendy is that though she is very young, she has a strong idea about what being a mother is like. You can see in the beginning that she enjoys pretending to be a mother with her brother John, and you can see that she really cares about Peter and the Lost Boys,” Heimsoth said. “She knows how you’re supposed to treat your parents, and she teaches the Lost Boys how to treat their ‘mother and father.’ Like for example, you’re never supposed to sit in your father’s chair when he isn’t there.”

The performance takes place today through Saturday. Tickets costs $6 for the general public, $4 with student ID and free with activities’ pass. The actors practice daily to create a great family show that everyone can enjoy.

“I have done a lot of thinking about and practicing how my character acts so that I can make sure I am portraying someone else’s story on stage. Many of our characters are children, so we’ve had to think about how children move and what they value so that we can tell that story,” Sapp said. “Other than that, we’ve had to do the usual memorizing lines and learning where we move on that stage in relation to other characters and the set.”

What did you think of the play? Let us know in the comments below.

Valentine’s Day should be about opulence