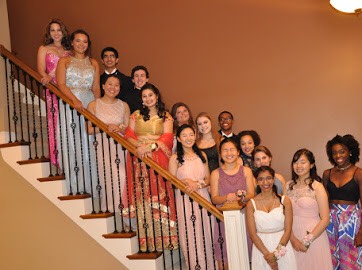 Administrators and Student Council members helped clear up confusion surrounding the date and location of the senior prom. Seniors expressed disagreement over what they thought was a scheduling change in a collective group chat, as the school website said prom was set for April 28, but teachers and administrators later announced that the event would actually take place on April 21.

Senior and Student Council president Dalton Nunamaker explained that prom had been planned for April 21 for months, but no one knew because the online calendar mistakenly said April 28.

“Prom is usually the last Saturday in April, so no one really questioned [the error],” Nunamaker said. “The problem was that as people made their end of the year plans around prom being on the 28th, it really messed up the schedule when we figured out it was actually scheduled for the 21st all along.”

He added that students in Speech and Debate, the Distributive Education Clubs of America (DECA), boys’ tennis and track and field all have competitions that weekend and would have to choose between those activities and prom. Success Center teacher Melissa Coil said those in charge of planning prom analyze these factors when choosing a date, but other elements must also be prioritized.

“We have had a contract with the Marriott since April of last year for April 21 this year,” Coil said. “When the calendar committee meets in the spring of the year prior, they try and consider all of this. There is almost always an overlap with some other event.”

Many students, however, were insistent that prom be held on April 28, so Nunamaker and fellow senior Student Council members Sayde Hindelang and Macy Knorr called different venues to see if there were any openings that day.

“My role was truly to find a venue and try to settle the situation as fast as possible, but it was a team effort to find a solution,” Hindelang said. “[The Hampton Inn and Suites] has a similar venue as the place we were set to have prom originally, and they are one of the only banquet halls open on the 28th.”

When choosing a location, factors that must be taken into consideration include the venue’s insurance, size and parking, Coil explained. Fortunately, the Hampton Inn and Suites seemed to cover all these needs, and students were able to settle the new date and place with administrators.

“I’ve mostly communicated with venues, Student Council and administration to clear up the issues the senior class had with the rescheduling and in planning a new location,” Nunamaker said. “Using the senior group chat I created, we could also effectively communicate with many seniors to get the word out and clear the issue up.”