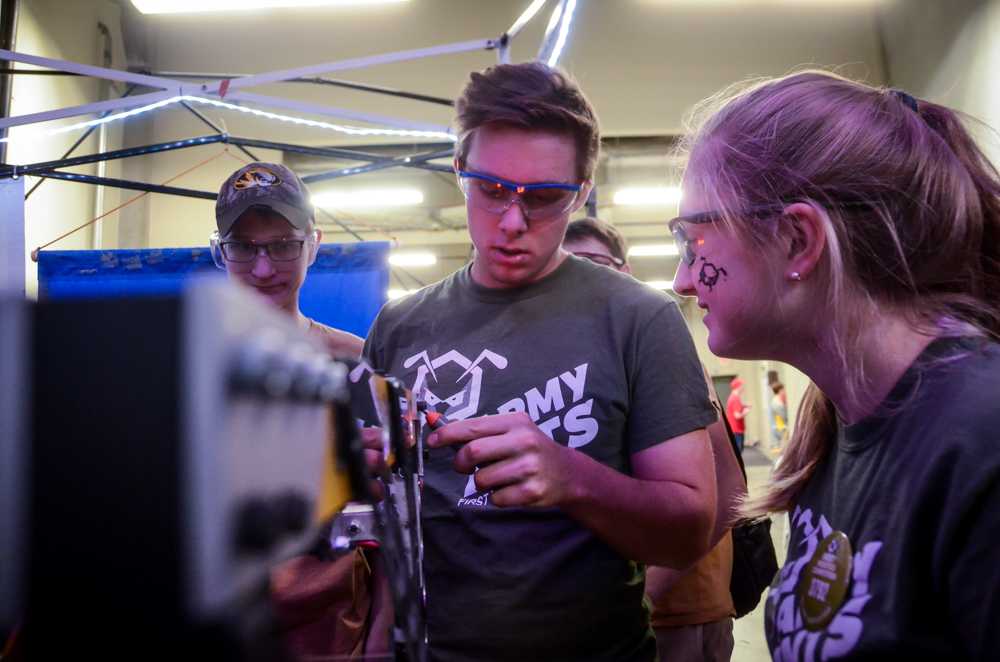 [dropcap style=”flat” size=”4″]T[/dropcap]he Army Ants Robotics team is packing up their robot and heading to St. Louis, Missouri this weekend for their first competition of the year. After a strenuous six-week build season, where the 31 members of the team met every day after school until late at night and sacrificed full-length Saturdays, the robot is complete and ready to put up its best show.

“I thought the build season went very well,” Head Mentor Dr. Kevin Gillis said. “The team finished the first draft of the robot within four weeks, which allowed two weeks to program the robot, practice, break it and learn how to fix it.”

This year’s challenge involves the robot picking up milk crates and placing them on a six-foot tall balancing scale. The robot will compete on a team with three others to create a three-versus-three game, where the teams receive points when the scale tips in their favor.

Junior Joe Thomas, one of the two robot drivers, said he looks forward to putting the team’s hard work into motion and competition.

“What excites me about this weekend is getting to see our robot, that we have put so much time and effort into in the past six weeks, perform and seeing how it compares to other robots,” Thomas said. “I also look forward to hanging out with the team and just have fun.”

Additionally, three-year Army Ant and junior Louise Schul looks forward to watching the robot come to life, surrounded by her teammates that double as her close friends. Her favorite part about competition season is seeing their giant project go from being just ideas and drawings to a functioning robot.

Schul is one of the team’s programmers, so she works with the code that allows the robot to operate as a competitor.

“If anything goes wrong with the code I’ll work on fixing it,” Schul said. “I’m also really into strategy, so I’ll watch other robots play and come up with strategies to work with them if we’re competing together or try to beat them if we’re playing against them.”

This weekend’s competition is one of the two regional tournaments the team will attend, the other taking place next weekend, March 17 and 18. If the robot wins the competition or receives an award for community outreach, they will automatically qualify for the world championship in Houston, where they will compete against 600 teams.

Dr. Gillis said that the team carried out 28 outreach events in 2017, which should make them competitors for the Engineering Inspiration Award. He looks forward to seeing how the 180 total hours of work will come together this weekend, allowing the Army Ants to show off their future-building masterwork.

“The main goal [of competition] is to celebrate the achievements of this outstanding group of students,” Dr. Gillis said. “The team built and programmed an incredible robot that will be tested on the field and will also compete for awards recognizing their outreach efforts to spread the excitement of STEM to hundreds of younger students.”