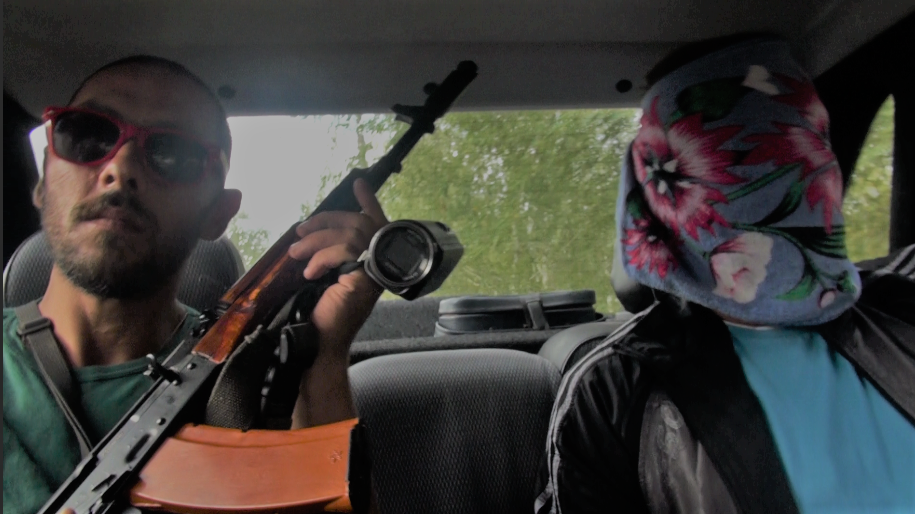 [dropcap style=”flat” size=”4″]I[/dropcap]f you want to feel crushing disappointment for an hour, look no further than “Flight of a Bullet.” The film, consisting of one single shot, holds little more than wasted potential and drawn-out, one-sided conversations between soldiers.

“Flight of a Bullet” seems to take place during the Russia-Ukraine unrest of 2014, as the director, Beata Bubenets, follows Ukrainian soldiers and civilians doing — actually, it’s unclear what either was doing. The film opens on a partially-blown up bridge being inspected by the Ukrainians as Bubenets gathers footage. At first, it’s footage of the bridge — which is just as boring as it sounds — until a civilian forces himself as the focus of the camera and demands to know why Bubenets is filming.

She doesn’t really give a reason and mumbles excuses, while her Ukrainian partner — who apparently is also part of the military? — argues with the man. It gets boring, again, but the movie actually starts to pick up when you can hear bullets ringing out.

A different Ukraine soldier appears into the scene, screaming at the man for identification and threatening to detain him. A different civilian interferes, asking the soldier why the man is being detained. The soldier gets pissed off and detains that civilian instead, accusing him of being a separatist. The newly-detained man gets into a car by force, and Bubenets follows.

The film then takes us to a base controlled by Ukraine, and the civilian enters the basement for questioning. At this time, I was actually enjoying the documentary because of the unanswered questions I had. What was going to happen to this poor man? The soldiers question the civilian for a few minutes and later determine he was, in fact, not a separatist, but keep him to help the soldiers plan how to occupy a checkpoint held by their enemy.

The scene that follows is interesting; the soldiers and the civilian draw plans on a chalkboard of how to infiltrate the checkpoint, and although it lasts a long time, the constant banter helped in keeping the momentum going. At the end of the day, however, it’s really just a scene of a couple of guys arguing about the best way to take over an area.

After they finally decide on a plan, the soldiers leave, and you’d expect Bubenets to follow. She doesn’t, and the rest of the film is stuck with boring footage of a man yelling at his girlfriend on the phone and other men lounging around in the base.

The idea of a single-shot film is an ambitious one, and it fell flat. While I expected the film to have a few dull moments because there was no editing, I didn’t expect the latter half to be one big boring moment. I don’t know what Bubenets was trying to accomplish with this movie — humanizing soldiers in a dirty conflict? Bringing light to the Russia-Ukraine war? — but she failed.

Did you see the film? What did you think? Let us know below.