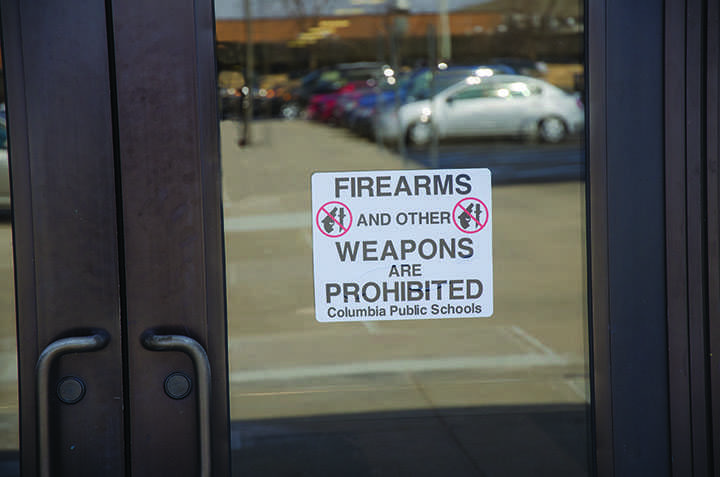 Bullet after bullet, death after death, every mass shooting in the United States sparks nationwide sorrow, shock and Twitter prayers. With each massacre comes the rekindling of the everlasting gun control debate, which historically results in little action and tends to dissipate until the nation’s next tragedy.

Following the deadly school shooting at Marjory Stoneman Douglas High School in Parkland, Fla. last month, several survivors have attempted to spark gun action by calling on lawmakers to pass stricter gun regulations in hopes of preventing another similar incident in the future. These pleas for change have resulted in discussions on gun reform, from Florida governor Rick Scott signing the “Marjory Stoneman Douglas High School Public Safety Act” to President Trump suggesting teachers should receive training on how to handle firearms and be armed on school grounds; Missouri legislation seems to be moving in the direction of the latter.

House Bill (HB) 1942, first introduced by Rep. Dean Dohrman (R) in January before the shooting, is under debate by Missouri lawmakers. Dohrman said the bill would allow any full-time faculty member at a university in the state of Missouri to volunteer as a “campus protection officer” who would receive extensive training to carry a concealed firearm on campus.

“I don’t know if it will prevent [a mass shooting], but it certainly could reduce the incident. The number one thing is to have someone there who could immediately respond. These incidents usually take five minutes, and the average response time is 11 minutes. By the time a uniformed policeman gets there, it’s pretty much over; the damage has been done,” Dohrman said. “The second thing is that often these shooters go to gun-free zones. If there’s any doubt in a shooter’s mind that a campus is a gun-free zone, hopefully it will prevent them from choosing it as a target.”

While University of Missouri-Columbia (MU) professor Lael Kaiser doesn’t think the bill will diminish campus protection, she doesn’t think it will be able to prevent a mass shooting, as a faculty member likely won’t be able to harm an active shooter quickly enough. She expressed her concerns on the possible dangers that could come with having several armed persons on campus.

“I worry that a faculty member would accidentally kill bystanders [in the event of a mass shooting]. And I worry that the police might kill the faculty member who had a gun since they would not know who the shooter is,” Kaiser said. “Like in any workplace, I [also] worry that someone with workplace issues would be able to bring a gun to work without the police being able to easily remove them from the workplace if they were being aggressive or threatening; however, I think it is highly unlikely that this bill, if it passes, will make students less safe. But I don’t think it will help prevent a mass shooting.”

If the bill becomes law, it won’t be the first time faculty members are able to carry weapons on state campuses. In fact, a school district in Missouri, the Fairview R-XI district in West Plains, has been training and arming teachers with firearms in their school since the 2012 Sandy Hook Elementary School Shooting. Currently, it has multiple schools with teachers trained and armed with concealed firearms. National media organizations like Fox News and The New York Times have recently shed light on the district’s firearm training.

Aaron Sydow, superintendent of Fairview R-XI, explained that teachers receive rigorous training from a combination of numerous groups, including the local sheriff department, a SWAT team and Shield Solutions LLC, a Missouri-based company that specializes in school security. Teachers learn the basics of operating a firearm before they engage in live fire drills, ranging from clearing buildings and parking lot scenarios. The district initially debated hiring a school resource officer but later decided that an undisclosed team of teachers would be a better option for campus safety.

“The biggest problem is, and we hear this over and over again, is soft targets. For our applications, the only reason we wanted this type of system in play was so that in the event that there is an emergency, we have an emergency response team that will respond to that emergency,” Sydow said. “The intent is that if you come into our school, you have no idea who’s gonna meet you with force.”

RBHS students, though not in college yet, are aware of the implications this bill can have on their futures and other Missouri schools. Two juniors, Caiya Marshall and Sam Smith, have exact opposite views on the bill and on how schools should implement school safety. Marshall sees the bill as unsafe while Smith views it as an opportunity to protect more students.

“[I think it’s a] bad idea [to arm teachers] because I don’t think it’s safe if there’s just guns on campus that other people could possibly have access to. Also, most teachers don’t want to be armed, and it would cost so much money to give a gun to every single teacher. . . when you could just get more police officers in the building and keep it as it is. [RBHS] now has one police officer, and Battle and Hickman each have at least four on campus at all times,” Marshall said. “Other schools have those smoke bombs, so if an intruder comes in they pull it and smoke comes out. . . There are a lot of things to invest in other than guns that would improve safety and security rather than to arm teachers.”

On the other hand, Smith said as long as teachers are comfortable with handling a gun and using it if a scenario ever occurred, he would be for arming teachers.

“I do [think this bill should be passed] because if someone can prove that they are sane enough and that they have been trained with a gun, then they should have one. Because if you are mentally healthy, and you’re a teacher and you have a bunch of students in your class, of course school shootings are happening a lot now,” Smith said. “Only good things can come of a responsible adult with a gun protecting all the kids. . . I don’t see any harm that can come from it.”

While Sydow said it was unfortunate that school safety has come to arming teachers for security, he believes it is a strong way to counter a school shooter.

“My question is, what makes it more dangerous? I think a lack of education and a lack of understanding of what the requirements are generate these preconceived notions that it is unsafe,” Sydow said. “You have to vet the people. You have to be careful about who you put through the training. To all of these people that argue that it’s unsafe, this is what I would put to them: they would’ve been very happy if an event like this happened in their school and they had people like this in place. Our people are emergency responders, so they are going to respond to a situation. If, in the process of mitigating that, one additional student is spared because they were able to eliminate a problem, then the entire program is a success. That’s one kid who gets to go home at night, that wouldn’t have got to before.”

Boys’ golf prepares to tee off against Hickman