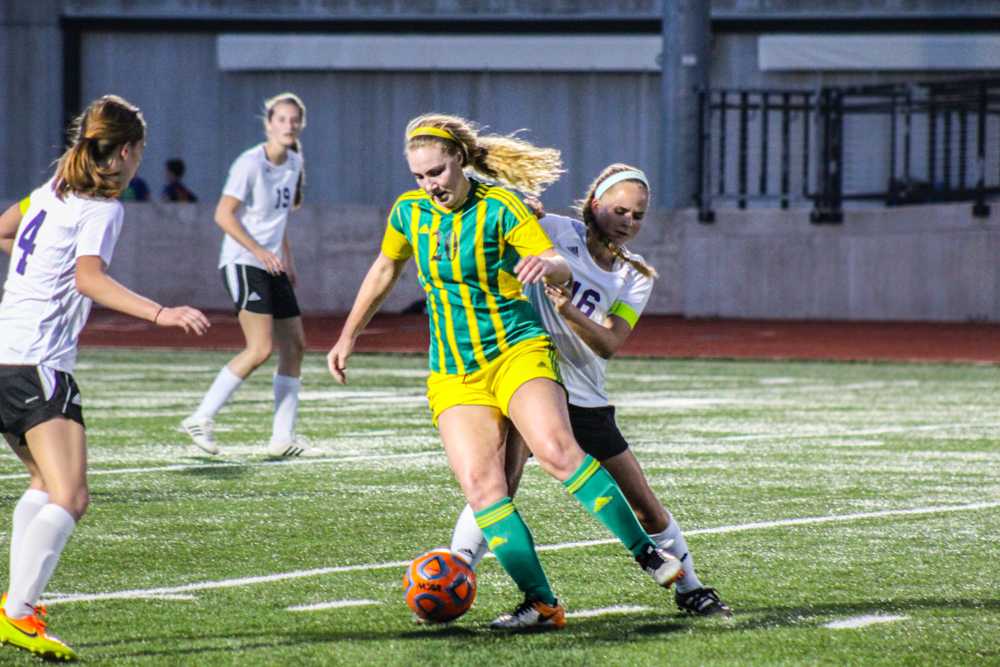 [dropcap style=”simple” size=”4″]A[/dropcap]part from the jamboree held March 9, this past week marked the first game for the Lady Bruins who took on the Boonville Pirates in a home soccer game March 16.

The Bruins defeated the Pirates 4-0 to move to 1-0 on the year. Junior Beni Adelstein said each year it takes some time for everyone to adjust with new players and formations, so given the circumstances, she believes the team performed well.

“We had a shutout and possessed the ball, but we still have some things we need to work on,” Adelstein said. “It’s very rewarding to score and contribute to the win. I love being able to help my team.”

Adelstein, who scored in the 66th minute, passed the ball to senior Payton McAllister who then passed it to freshman Sta Omar who took a shot from the right side.  The goalie blocked the ball, but mishandled it, so Adelstein was able to shoot it into the goal.

As the game progressed, Omar said the team became more comfortable and connected. She believes as they continue to play together, they will become even better. With over 15 games still left in the season, Omar hopes to work on becoming a better offensive player and getting past defensive lines.

“My other goal is to become a better teammate,” Omar said. “I feel that the closer we become the better we perform on the field.”

Head coach Gary Drewing said the team is performing very well in practice and he would like the topics the team is developing in training to appear in games.  Overall, he was pleased with the performance.


[quote] “The first game gives us the first look at our team in a full game, and gives the staff topics to address during the next few practices,” Drewing said. “Win or [lose], good performance or bad performance, good teams enjoy victories while continuing to build on each game.  We are developing a team that enjoys the moment while looking to improve every day.”[/quote]

As a third-year returnee, Adelstein brings both experience and talent to the team.  Additionally, she believed having played for the Bruins in the past helps tremendously because she is more comfortable with teammates, understands a lot of the plays and knows how her teammates like to play.

“The program has trained me to become a better athlete because it encourages teamwork and working hard,” Adelstein said. “I’ve learned about not just figuring out to how improve yourself as a player but how to become familiar with the people around you and adjust to their style of play and ability.”

While Adelstein is graduating with the class of 2019, she plans on going abroad next year, making this her last season as a Bruin.  She said she knows she’ll miss being able to practice with her friends everyday. Furthermore, Adelstein said she didn’t plan to graduate this early until the fall of last year.  She had always expected at least four years of high school soccer. Because of the change,Adelstein says her mindset is definitely affected.

“Now that I know I only have a few months, I think I’ve been more appreciative of the little things and more motivated to do well,” Adelstein said. “I try to do my best , enjoy myself as much as I can and not take anything for granted because I love playing soccer and it’s sad knowing that one day pretty soon I won’t be doing it.”

Did you attend the soccer game? Let us know in the comments below.