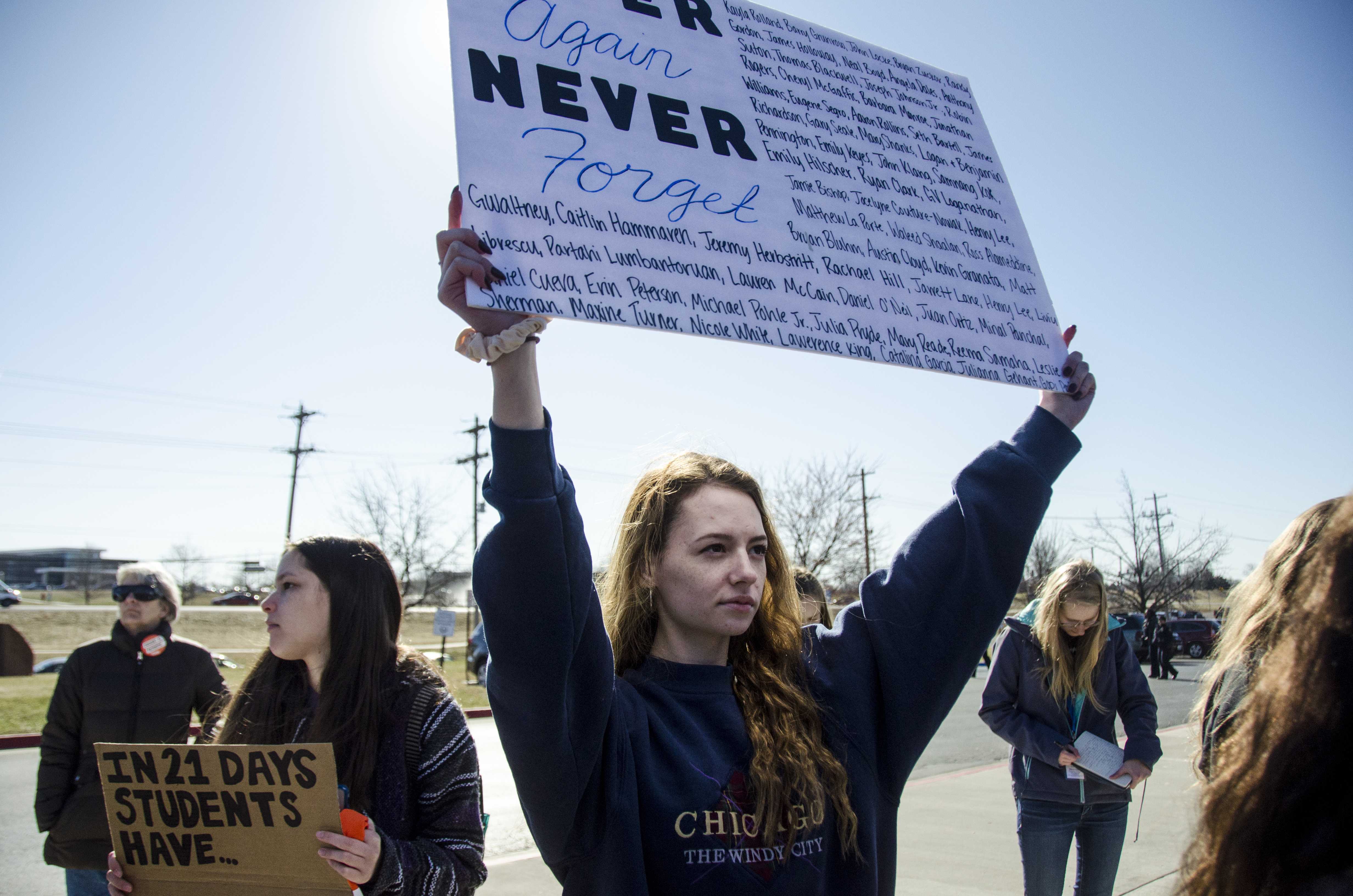 Whole body trembling, messaging friends through quick texts and nibbling on Cheez-Its, junior Savannah Schnabel did her best to keep calm. Shocked and filled with buzzing nerves, Schnabel watched a tow vehicle drive away with her car, a 2011 Mitsubishi Endeavor, hooked on the back. She would find out later that the car was completely totaled, a devastating outcome since she had gotten the car only a month before on her birthday.

Schnabel, like her car, sustained injuries in the accident, including a concussion, whiplash in her neck, three bruised ribs, a bruised patella and a small fracture in her foot. She credited her minimal injuries to the seatbelt she was wearing.

“I was heading to New Haven for volleyball practice northbound along State Farm, and a car was heading southbound. He didn’t yield to me and turned left onto Old Nifong, which resulted in me colliding with the right front portion of his car,” Schnabel said. “At the moment of the crash, I remember thinking, ‘I’m about to hit someone’ and screamed a little, then right when the airbag came out, I felt my body jerk forward and back. I was honestly worried about getting to volleyball practice. . . and trying to figure out how to handle the situation. I was definitely in shock, shaking from head to toe.”

Although the accident happened four months ago, that day’s events are still prominent in Schnabel’s everyday life. She still gets anxious while she’s driving, overly conscious of her surroundings, and has vivid flashbacks to the moment of the crash.

“Every time I drive along that street, State Farm, I slow down at least five under the speed limit, and my heart just starts pounding really fast when I am in the spot of the crash. Whenever I see a car coming the opposite direction of me and have their blinker on to turn, I get nervous and anxious, just hoping they don’t turn in front of me,” Schnabel said. “Sometimes, I start to breathe really heavy, and I just think back to how it felt to crash into another car.”

One could claim Schnabel’s feelings and cognitive process toward remembering the accident are similar to some symptoms of trauma. The term trauma describes a person’s psychological and emotional response to an event or experience that is deeply distressing or disturbing. The Center for Treatment of Anxiety and Mood Disorders reported a person who suffers from trauma may experience acute anger, persistent sadness and despair, unpredictable emotions, intense feelings of guilt and an altered sense of shame. Though Schnabel didn’t describe herself as strongly feeling any of these symptoms, she said her accident was traumatic and stressful.

Every person responds differently to trauma, said Dr. Ryan Brunner, associate professor of psychology at Westminster College. Their reactions can depend on factors such as past occurrences or a family history of anxiety disorders.

“Individuals experience trauma for a number of reasons. One important model in psychology that predicts which people are likely to struggle the most with traumatic experiences is the diathesis-stress model. It states that the your existing predisposition —genetic and environmental— interacts with your current stress level to predict the onset of psychological disorders or trauma,” Dr. Brunner said. “There is some evidence that how people recall their past stressful experiences predicts how successful they are in coping with those traumas. Specifically, some of my own research has shown that people who recall past traumas from more of a distant (what you would call a “birds-eye view”) perspective are better able to find meaning in the trauma and move past it. Individuals who recall memories from more of a first-person perspective, however, are more likely to ruminate on a memory of trauma and relive the negative event over and over again.”

When it comes to traumatic events, more people than the individuals who experience them first-hand can experience stress, the U.S. Department of Veteran Affairs (VA) reported. Through intensive and raw media coverage, individuals otherwise uninvolved with distressing incidents can still become stressed from watching the crisis on the news. For example, the VA stated those who watched the most coverage of the Sept. 11 terrorist attacks felt more symptoms of stress than those who viewed less. The National Public Radio (NPR) even polled Americans and found that those who watched, read or listened to the news had higher stress and anxiety levels. Though stress on its own is not trauma, it is one of the main responses to trauma.

In present day America, one of the biggest stressors on the news, arguably, is school shootings. Currently, there have been over 19 school related gun incidents with an outcome of 20 deaths in 2018, said ABC news. The most recent of those incidents was the shooting at Marjory Stoneman Douglas High School in Parkland, Fla, where a past student entered the school and shot 17 students and staff members. For those following the progression of the stories of that occurrence and of others, they probably felt increased stress or an increase in anxiety levels.

Junior Isabel Thoroughman can’t imagine the emotions those students from Marjory Stoneman High School went through and how they move on from an event so nightmarish. When news first broke of the Parkland shooting, she said her first response was a numb feeling, which she described as a horrible reaction. It took until the next night for her it to hit her, and then she was devastated.

“I was thinking about how if that was our school, I could have lost my best friends. I could have lost teachers that have impacted my life. It could [happen at] our school, and that’s terrifying,” Thoroughman said. “I’m sure all your senses are on high alert after [a traumatic event] like that happens to you, and that has to cause a lot of stress and paranoia. I know I’d also feel incredibly sad and guilty after experiencing a school shooting. What if I had known? What if I could have protected one of the people that got hurt or died? I also think it must feel guilty seeing the families and friends of those lost grieving and knowing that could have been you.”

Thoroughman, though she has never been in an active shooter situation, knows she would be petrified if anything like that occurred at RBHS, which is why she pays attention during drills so she’ll know how to keep herself safe. In addition to knowing what to do, Thoroughman is adamant on taking initiative for gun control by attending the national walk-out that took place March 14 and another upcoming one on April 20. She believes no person should have to fear or experience a shooting in his or her school, especially since she knows the emotional effects of the event can last a lifetime.

One form of comfort schools have received after lethal shootings are letters and cards made by other schools’ students. After the event at Marjory Stoneman High School, students from Virginia Tech University sent a collection of cards and poems they had made. The gesture was sweet, yet chilling, as Marjory Stoneman High School students had done the same thing for Virginia Tech students back in 2007 when a shooter had infiltrated the college and killed 32 people. At RBHS, AP Language Arts and Literary teacher Nicole Clemmons asked for students and staff to make cards and sent them to Parkland.

Outreach counselor Lesley Thalhuber loves Clemmons’ idea, hoping the letters will bring the students comfort, as experiencing such traumatic events can be stressful and difficult to deal with afterwards. As a counselor who works with students with long-term issues, Thalhuber is perceptive on how to support and treat those who have been through something traumatizing. Unlike the indirect and miniscule trauma people may receive from watching the news, she said people who encounter something traumatic directly will have more extreme responses than just an increase in stress, such as difficulties in regulating emotions, focusing in class and trusting others. Although the symptoms are universal, she believes treating trauma is different in every case.

“Because there are a number of factors that will affect each individual’s processing of that kind of tragedy, there will not be simply one treatment modality to fit all. A safe place to talk and connect with others is a good start. Knowing the symptoms of trauma and where to connect with professional help in your community would be another good next-step,” Thalhuber said. “The activist work we are seeing come out of the latest shooting in Fla. is a way those students and families are productively channeling their anger in regards to that traumatic event.”

Recovering from a traumatic event, Thalhuber said, is paramount, as the symptoms can affect a person’s everyday life and capabilities. For example, she said Post-Traumatic Stress Disorder (PTSD) left untreated can lead to many limitations of quality of life and functioning abilities. For high school students, these issues can inhibit developing good executive functioning skills, learning capacities, as well as cause behavioral problems and difficulty in sleeping.

“It might look like difficulty managing anger and having little to no human connections, and the anger can turn on oneself and lead to depression and even self-destruction,” Thalhuber said. “For some, dissociation or arrested development can interfere with their life function. There are so many devastating effects that can stem from untreated trauma.”

For Schnabel, experiencing such a severe and devastating accident first-hand was traumatic, however, it’s not the only thing she wants others to learn from. Recently, Schnabel lost a family member who was just 16 in a car accident because she wasn’t wearing her seatbelt. She would like to remind RBHS students to be safe, alert and cautious when they drive, as the trauma that occurred to her and her family happens to too many people.

“I would say I have [nightmares] more often now after my crash and losing a family member to a car crash recently. I do have times where I jump awake from dreams about crashing into other cars, and it just makes me feel more aware of how I drive and how others drive, as well as a nervous feeling,” Schabel said. “Whenever I’m driving music usually helps me calm down and feel relieved; it puts me in a different mindset. I also always remember that God has a plan for my life, so I know things will happen for a reason.”

Louder Than a Bomb performances