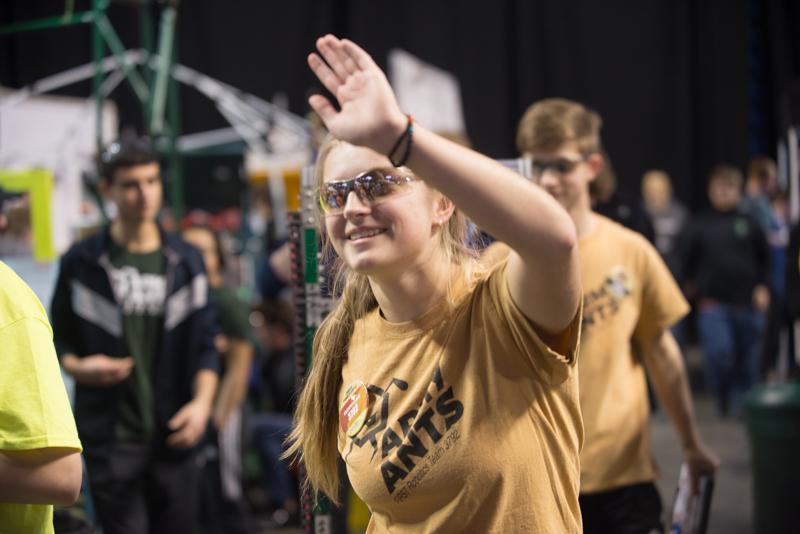 [dropcap style=”flat” size=”4″]S[/dropcap]tarted April 18 to 21, the Columbia-based Army Ants robotics team competed in the For Inspiration and Recognition of Science and Technology (FIRST) robotics competition in Houston Texas. This world championship was not the first major achievement of  the team as they won the Engineering Inspiration award at the regional competition in St. Louis, Mo.

This award was based off community impact and inclusion and diversity; they received a sponsorship from the National Aeronautics and Space Administration (NASA) for $5,000.

As a world competition, junior Louise Schul said it was exciting to share ideas with hundreds of other teams. She said a lot of people were interested in their design and also go the opportunity to learn for other designs.

“In Alabama we won robot competition. This was the first year we ever made it past the quarterfinals,” Schul said. “Both of those awards qualified us to go the the world championship last week, for the first time in eight years.”

Junior Joe Thomas said before the competition starts, teams are divided into six divisions. On Thursday and Friday, the teams played 10 to 11 games for qualification rounds.  In these matches, there are two alliances of three robots that are randomly assigned by a computer, Thomas said.

The game, FIRST Power Up, is alliances of three robots going up against each other stacking power cubes to try and gain the most points.

“You are ranked based on your average ranking score which is based off of the average amount of ranking points you get in each match. There are a total of four ranking points in each match. You get two for winning and then there are two more that your alliance can earn for completing various tasks during the match,” Thomas said. “After the qualifying round there is alliance selections in which the top eight seeded teams get to choose who they want to be on there alliance for the playoffs. The alliance that wins the playoffs then moves onto the Einstein field on which the winners of each division play in the semifinal round robin. Then the top two after that play best two out of three for the finals.”

At the end of the qualification round the Army Ants ranked 17th and did not get picked for playoffs. However, senior Cami Kudrna said the team was more successful than anticipated. In their division they had to compete against 67 teams, and they loved competing against people across the world.

“A lot of strategy is involved to do well, including scouting and finding out how well other robots perform, knowing your own strengths, and working together with your alliance partners to put together the best plan to beat the opposing alliance,” Kudrna said. “Other than the robotics part of the competition, there were a lot of other things to do while in Houston. There were businesses that came together to set up promotional booths called the Innovation Faire, celebrities were roaming around the competition at points, and we got to bond with other teams throughout the competition at lunch, different events set up at a park across the street, and in the pits.”

All of the Army Ants achievements did not come without hard work. To prepare they had six and a half weeks to build their robots. They met everyday after school and stayed until 9:30 or 10 p.m. They also met all day on Saturdays and sometimes on Sundays.

“Some of the difficulties we face is the time restraint and the fact that we still have to go to school,” Thomas said. “Another difficulty that we face is that there are many times where we don’t have the parts that we need so we have to order them which can take a week to two weeks depending on how far along into build season we are and how important the part is.”

All of this time spent together can definitely bring a group of people together, and Kudrna believes just that.

“The team definitely got close,” Kudrna said. “I already loved the people on this team, and they’ve all had such a great impact on my life, but being able to spend time with them in another state, being able to go through this life changing experience with them, it’s something I’ll be forever grateful for.”