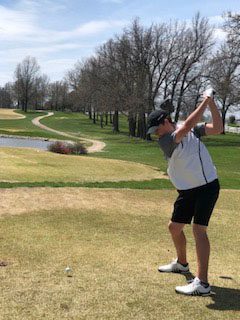 The team shot a combined score of 319, with senior Hudson Dubinski finishing in first place among all individuals with a score of 74. It was the first match of the season where the team did not finish in first place, and head coach Austin Reed hopes the Bruins received a wake-up call from the end result of the match.

“The course was in good shape. The greens were fast and it was very breezy,” Reed said. “[However], I hope the team keeps their composure [moving forward] and doesn’t take anything for granted.”

During the match, Reed tried to motivate the players by only using positive encouragement. He thought it was best if he didn’t ask about how they were playing and, instead, attempted to keep the players light and loose.

“[I] usually try to just motivate the players for [all matches],” Reed said. “Sometimes I feel like if I ask [them] about their scores it might freak them out and [disrupt them].”

While junior Ross Steelman did not have the round he wanted or expected, he appreciated Reed’s positive company. Reed’s encouragement might have made Steelman’s score of 80 seem less disappointing, but Steelman plans to ensure he never plays the way he did during Tuesday’s match.

“[I] played terrible and was not happy with my result,” Steelman said. “I [expected] to play well and didn’t, [so] I’m working on some swing and putting changes.”

Fellow junior Keith Schaezler also did not have a great showing during the match. Schaezler struggled with adapting to the green speeds, much like Steelman, but hopes he can continue to improve in this aspect of his game.

“It was harder to to judge the speed of the putts and chips early on,” Schaezler said. “But as the round progressed, [I was] able to get a better idea [of the greens] and perform better.”

Even though Schaezler’s drives were not great throughout the round, he credits his strong chipping for saving a part of his round.

“My driver and my putting were pretty awful [on Tuesday],” Schaezler said. “But my chipping was better than it has been recently. I [also] think more time on faster greens will help me adjust [better].”

Schaezler and Steelman will need to gather themselves quickly in order to play well in their last match of the regular season. The match will be held today April 25 at the Old Hawthorne Country Club in Columbia, Mo.

“My [goal for the match at Old Hawthorne] is to win,” Steelman said. “To do [that], [I’ll need] better ball striking and a more consistent [performance].”

How to make money taking senior photos in high school