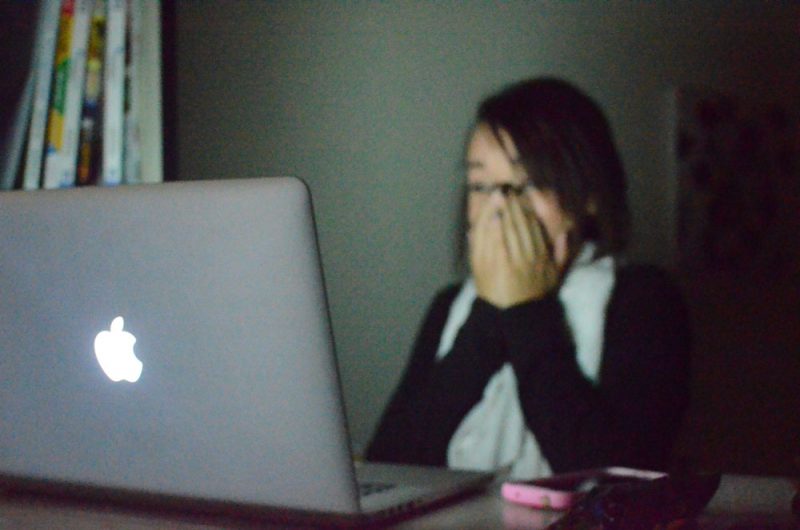 [dropcap]F[/dropcap]luffy, white puffs of clouds twist into different shapes as a kid looks up at the sky; for many children they use the clouds to hone their imagination, but for senior Kaelyn Kovarik clouds were a source of fear instead of fun.

“I was indeed afraid of clouds and dogs,” Kovarik said. “I’ve gotten over the clouds completely, and I’m mostly over my fear of dogs, but sometimes I get a little nervous around them.”

Kovarik’s fear of clouds started at school where teachers would stress the dangers of severe weather. Her concern was not shared with her family members, who would go outside to watch the storms as Kovarik cowered in the basement.

“After being outside in a couple bad storms at a soccer practice or some activity and hearing the destruction of tornadoes on the news, I was pretty afraid of storms,” Kovarik said. “Any time I was outside after that, I would look at the sky very carefully until it got to the point that if there were any clouds at all, even white fluffy ones, I got really nervous and freaked out. It really frustrated my family I think, but I couldn’t help it.”

While Kovarik had a unique fear during her childhood, Dr. Rebecca Hendrix, an associate professor of psychology at the College of the Ozarks, believes that sometimes kids can actually have fewer fears because they are unaware of possible consequences.

[quote]“As a child, I climbed all over the barn at our farm,” Dr. Hendrix said. “Once I became an adult and saw my own kids do that, I feared that they would fall. I rarely thought about falling when I was the child. I am not sure then if this is less fear or less knowledge, less awareness of consequences, etc.”[/quote]

Hendrix believes fear changes as one gets older because of environmental interactions. She says children’s imaginative thinking is not logical yet, which makes them less likely to fear what an adult would.

“Many preschoolers think that whatever a substance looks like, that is what it is. For instance, my husband was a Roman soldier in an Easter play. As part of that role, he had to be fairly rough and snapped whips around and such while in character,” Hendrix said. “After the play, a close friend and his daughter came through the receiving line to shake hands with the actors. Although the little girl had had many previous encounters with my husband and was quite familiar to him, as far as she was concerned that night, he was a mean man. She didn’t understand the difference between acting and his real personality.”

The perspective differences between adults and children seen with Hendrix is also seen with the mother of two 10-year-old twin boys, Advanced Placement (AP) Biology teacher Kerri Graham. She believes she pays more attention to potential risks than she did before having kids.

“For example, before children, I would run in the dark by myself,” Graham said. “In college, I would walk home to my apartment alone. I just wasn’t concerned for my safety. Now I am much more aware when it comes to safety concerns, and my heart patters faster a little more easily. I think maybe because I have a responsibility for someone other than myself. In general, though, I don’t have a lot of fears.”

As she grew in age, Graham’s fears evolved as she became more attentive. She concludes they can change because one has more experience and recognizes the risks of the world around him or her.

Sometimes instead of increasing the amount of fears through age, they can decrease. As Kovarik grew older, she finally lost her fear of clouds. When she was in middle school, she realized that they were just cute, puffy clouds, which also helped her begin to get rid of her fear of storms.

[quote]“I believe getting older has a lot to do with [fear changing],” Kovarik said. “I think as kids we go completely by our instincts, whatever it is that they say. Once we get older there is more of a fight between instincts and logic, and eventually we can reason our way out of some fears.”[/quote]

Dr. Hendrix further explains kids have less fear because of their animism mindset. Animism is the belief that non-living objects have human characteristics, she said. Dr. Hendrix gave the example of a person putting gasoline in a car because it is thirsty or the reason that grass is green is because someone painted it.

“Elementary school kids are more logical, but they still think from the perspective of things they can directly observe or experience,” Dr. Hendrix said. “Therefore, something like death is abstract, and they cannot really understand how it is permanent. To cope with that, they end up personifying death. That means they think of death as a person like the Grim Reaper who might come and get them.”

How have your fears changed over time? Let us know in the comments below.