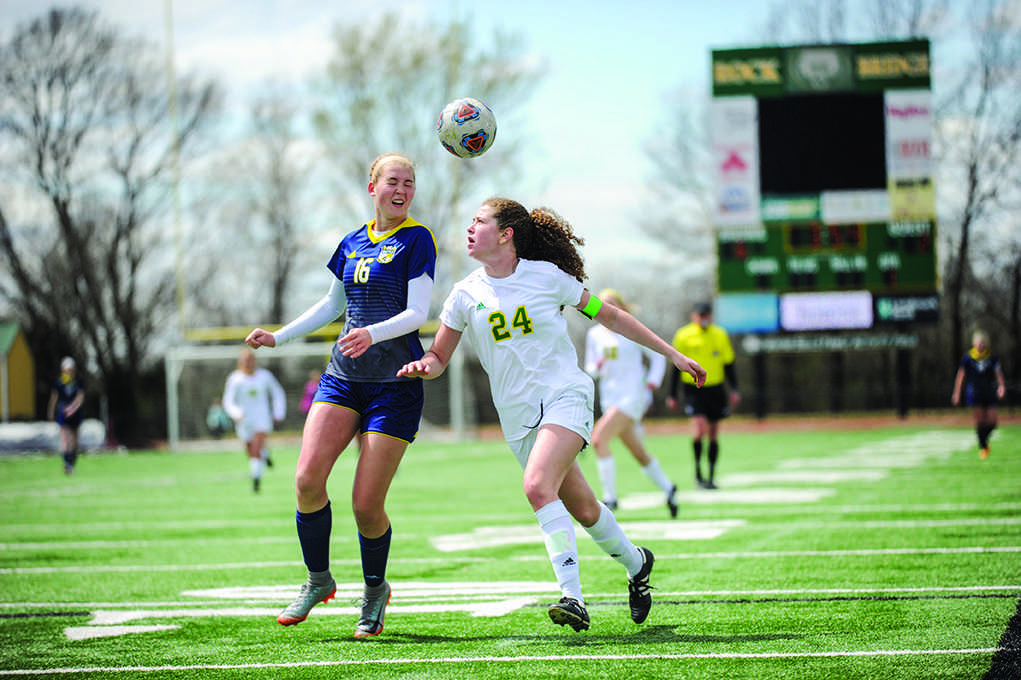 [dropcap style=”light” size=”4″]W[/dropcap]ith a solid season underway, the girls’ soccer team will face off against the Smith Cotton Tigers April 30. Hoping to continue their string of successes, junior Grace Davis says their main strategy is to win every 50/50 ball and outplay the opposing team.

“So far, the season has been really great, honestly,” Davis said. “We seem to do really well under pressure.”

This confidence is the same with teammate junior Beni Adelstein. She sees the Bruin dynamic as one of the factors for the team’s many victories. On her third year on the varsity team, Adelstein has a lot ot compare the season to.

“I feel that the team dynamic is one of the best we’ve had throughout my high school experience,” Adelstein said. “Overall, everyone is very encouraging, and we support each other, and I think we’re a pretty close team.”

For head coach Gary Drewing, Smith Cotton is a district opponent that always plays them well. He feels there is an added importance for the game as it affects district seed.

“Playing Smith Cotton in Sedalia adds to the challenge,” Drewing said. “Smith Cotton soccer has a strong community support, and they create a great home team atmosphere.  We approach every game with the intent to outwork the opponent, and Smith Cotton will test our approach.”

Fortunately for the Bruins, they did not lose many seniors last year and the varsity team is mostly made up from the same people as last year, which Adelstein believes makes them a closer and cohesive team, as well as creating a friendly environment.

“Sometimes you hear people on other teams yelling at each other when they get frustrated but our teammates generally don’t get mad at each other like that,” Adelstein said. “[Instead we] hype each other up.”

However, the Bruins do not just rely on their team camaraderie for games. About a week before the team plays against Smith Cotton, they will begin preparing. In order to be ready, the players will do drills based on the Tiger’s formations and where they put their best players on the field.

The team is also working on a work first mindset and making sure the Bruins make the opposing team beat the best they have to give them that day, Drewing said. Along with drills, the team does a lot of walkthrough type things, which is like a game but slowed down. This pre-game preparation has worked out well for the Bruins and Davis see’s the successful outcomes.

“We’ve had three games so far where we’re tied (1-1) for the majority of the game but we’ve been able to come back and score and win, and we’ve only gone into overtime once.”

With high faith in their ability to win, Adelstein can also say that they need to keep pressuring and moving as a group.

“We are pretty good at it but when we get disconnected, the other team can control the game easier,” Adelstein said. “Every season has its own feel and is a journey.  This season is going by very fast and we have found success with a record of 8-2.  Despite being this far into the season I don’t think we have really found our identity, and our best soccer is still ahead of us.”

on Starbucks temporarily shutting down