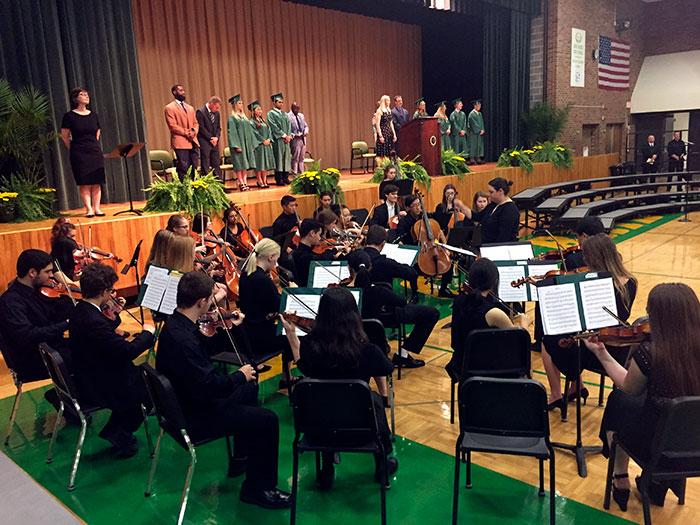 As the sound of the string orchestra swelled, the people in the bleachers rose to their feet and a stream of green entered the gymnasium as the 2018 RBHS senior class attended the long historied ceremony in preparation for graduation in their cap and gown.

While baccalaureate originated as a religious ceremony for graduating seniors, here it has evolved into a celebration of the senior class.

“It was once a religious service that took place in most high schools,” Rukstad said. “A minister, rabbi or other religious leader was invited to speak. At Rock Bridge, we repurposed this event. Now we designate it as time for family, friends and faculty to come together and reflect on the school year and seniors personal 18-year journey.”

The speeches throughout the ceremony struck a common theme of commemorating the senior class for their time at RBHS and looking ahead to what’s to come.

Class president senior Dalton Nunamaker, one of the speakers, said RBHS has 480 graduating seniors who have received more than eight million hours of public education and have put countless hours into achieving success in everything from athletics to fine arts.

“Rock Bridge students have that drive to make the most from every opportunity,” Nunamaker said. “No matter what our interest there’s a common theme of Rock Bridge being on top…we all succeed in different ways, we have different interests, friend groups, passions.”

The other student speaker, senior Laith Almashharawi, used his speech to offer advice and praise to the approximately 250 seniors in attendance.

“Life is about making a series of choices that lead you down to where you want to go,” Almashharawi said. “We have chosen to be successful. It doesn’t take the world to distinguish between average and extraordinary, and we can all put in a little more effort…a day without improvement is a day wasted…Our passions and developments outside of school are sometimes just as important as those in school … growth isn’t linear nor is it static, it is a daily target that the best pursue.”

Special performances by seniors Yoo Jin Jeong, Rosalind Eggener and the concert choir broke up the speeches. The string orchestra played during the senior processional and recessional.

Rukstad saw the event as an extra final time for seniors to come together at RBHS and memorialize their experience in the school.

“So now as you prepare to leave us,” Rukstad said, “thank you seniors for your leadership this year, and I congratulate you for leaving an impressive legacy on this high school.”

Plant more flowers to save the bees

Movies stretch the truth over the screen