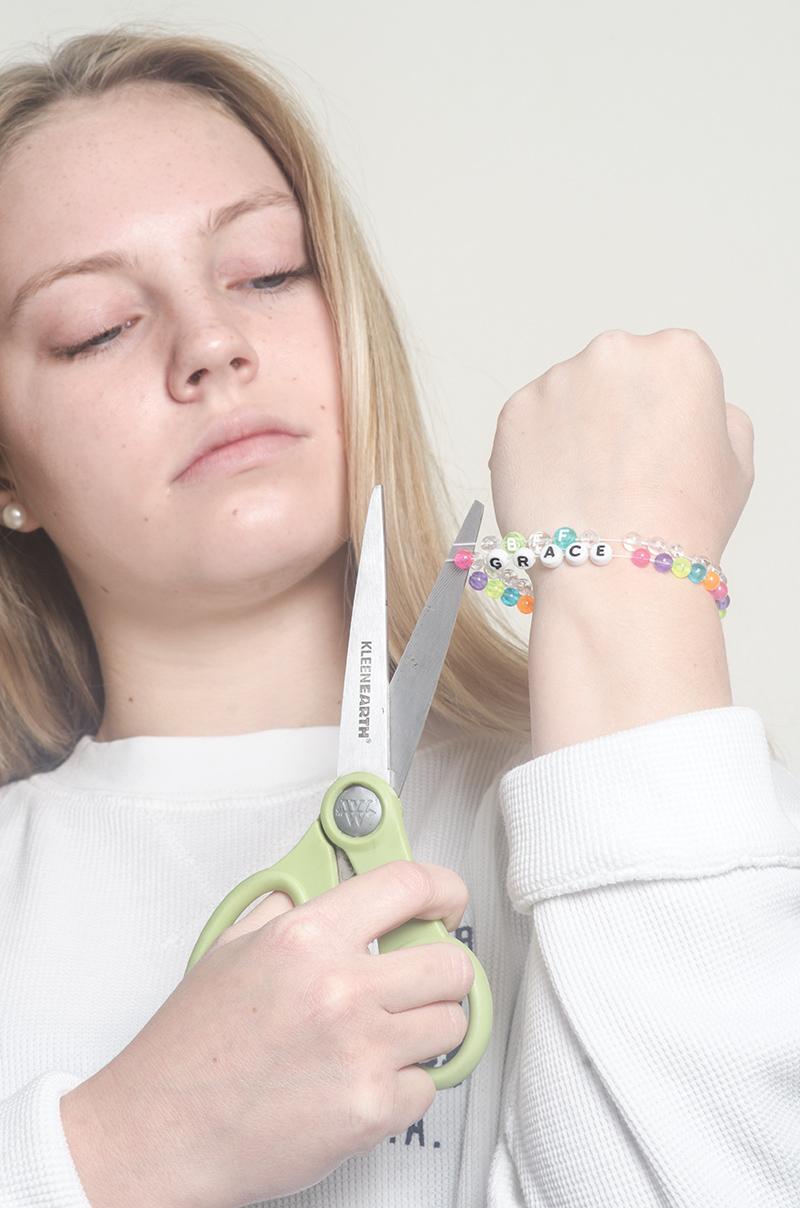 [dropcap]B[/dropcap]reaking up with a significant other practically comes with its own set of steps: a planned out time for when and how it will happen, a direct confrontation and a mutual agreement to either remain friends or avoid each other completely. But when one no longer feels compatible with a platonic companion, breaking out the “It’s not you; it’s me,” or “I love you, but I’m not in love with you” lines doesn’t really work. Because friendship breakups don’t have a definitive process, they can often be more complicated than the severance of a romantic relationship.

Freshman Peyton Brooks is all too familiar with this concept, as she was on the receiving end of a less-than-transparent separation.

In eighth grade, Brooks explained, she and two other friends welcomed a fourth girl into their trio. They became inseparable, hanging out every day leading up to the start of high school. As the summer ended, however, Brooks’ initial two friends drifted away, causing her to become even closer to the newcomer of their disconnected group. It wasn’t long before that girl also began drifting away after expressing anxiety over making new friends on numerous occasions. Unable to decipher if that person just needed space to talk to new people or wanted out of their friendship completely, Brooks felt confused and left in the dark.

“I have talked to her a few times since, just kind of like small talk, and I’ve kind of brought up the fact that we used to be really close and now she’s closer with other girls and how I felt like that wasn’t inclusive of me. She was like, ‘Yeah, I was just trying to be closer with other girls, too, and obviously we’re still friends; we just haven’t hung out since then,’” Brooks said. “I feel like… maybe she didn’t really want to be that close and wanted to be closer with the other girls, but I don’t think she meant for it to hurt me as much as it did.”

A large part of the problem for Brooks is that she didn’t get any closure, which Concordia University psychology professor Dr. William Bukowski said is often a characteristic of friendship breakups. With friends, one doesn’t expect a specific time period of continuity as with a boyfriend or girlfriend. Additionally, the process of getting rid of a romantic partner is more formal in the sense that there’s usually a specific moment in which the relationship ceases to exist.

[quote]“If you suddenly decide that you’re tired of your friend ignoring you, then generally people do not call their friend and say, ‘You are not my friend anymore.’ You just kind of erase the person from your mental phonebook,” Dr. Bukowski said. “You just give up on the relationship without doing it directly; whereas, when you split up with a boyfriend or girlfriend, you almost always have to give the person the direct information that you are no longer together.”[/quote]

Dr. Bukowski also cites high school as a period of increased turnover in friendships, during which adolescents more deeply evaluate what kind of people they want in their lives. Young children typically see friends as opportunities for companionship, and adults eventually become more dependent on romantic partners, causing the commitment of a friendship to become weaker. Thus, teenagers are the age group primarily dependent on friends who provide loyalty and security. Furthermore, adolescence is usually when individuals begin forming their identities, and friendships have a significant influence on that, Dr. Rebecca Schwartz-Mette, University of Maine Peer Relations Lab director, said.

“Complicating matters further is that adolescents are learning more sophisticated relationship skills and emotion regulation skills. So here is a time of life where friends are centrally important for social support and identity formation, and kids are just learning how to navigate these relationships,” Dr. Schwartz-Mette said. “So what can happen is that the ending of friendships can be especially rocky and/or just not occur because it feels like too much to lose or kids don’t know how to go about doing it in a way that doesn’t feel really scary and hard.”

Another factor that hinders the process of distancing oneself from a specific person is if two people remain in the same social circle afterwards, said Leah Lessard, a psychology doctoral student at the University of California – Los Angeles. While there is no one correct way to end a platonic relationship, sometimes phasing someone out is the first approach in order to see whether or not an upfront confrontation is necessary.

Although Brooks has experienced the pain of losing a friend in an evasive way, she acknowledges that she, too, has severed ties with people who have broken her trust. But instead of ignoring them altogether, she typically remains cordial while accepting the fact that she can no longer confide in them.

[quote]“If you were friends with a person for a long time and you were really close, it can make things hard because you don’t know who to go to for certain things because you’re not really friends with them anymore,” Brooks said. “You still want to tell them about things and stuff like that. The worst part [in my situation] is probably just not understanding why and just not understanding are we still best friends or friends even.”[/quote]

While the end of any relationship can elicit sadness, Lessard points out that certain friendships can be manipulative and problematic, and getting out of them can actually be beneficial. In Brooks’ case, she realized that the right people will stay and communicate their feelings without forcing her to change herself. She said there’s a difference between fitting in and belonging, and with her old friends, she was merely fitting in. Tension still arises whenever Brooks is around her former friend, but she’s coming to terms with no longer having that person in her life.

“I think it’s still awkward, and I don’t really know how to talk to her anymore. It’s kind of on and off,” Brooks said. “I want to bring up the little things to see if she’ll start talking to me again, but eventually that will fade out since I’m not as close to her and don’t necessarily need her.”

What kinds of friendship breakups have you experienced? Let us know in the comments below.

Art Around Columbia: “Taking the Plunge”