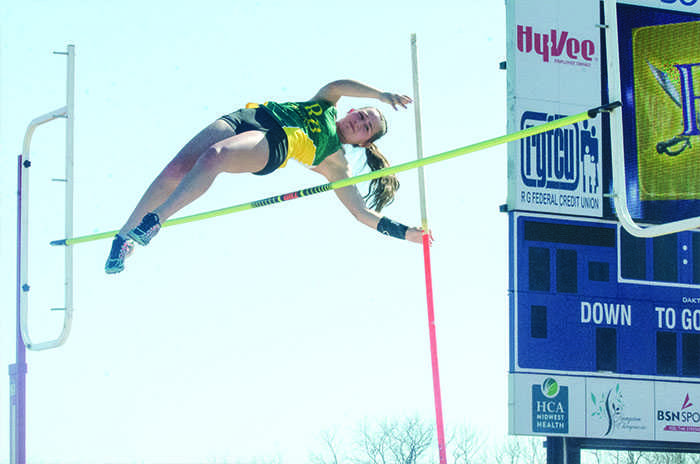 After lots of hard work and preparation, the girls’ varsity track team gets ready to compete with its contemporaries at the district meet. The girls varsity team along with the boys compete on May 12, at Waynesville High School for the district meet.

The district meet gathers the fastest runners from eight schools in the district into one meet where they compete. Head coach Neal Blackburn picks which races each varsity member runs.

“The regular season helps us choose our lineups with the understanding that we want to get as many kids through the postseason rounds as possible,” Blackburn said. “Even if it means taking them out of one of their normal events to focus on one they might be better in with hopes of moving onward to the next weekend.”

In previous meets in the season, varsity members had to meet a certain time in their events to qualify and go to the meet. In districts, however, runners have to place top four in their race in order to advance to sectionals, a large meet composed of multiple surrounding districts. This heightened level of expectations makes varsity stay focused.

“We prepare similarly for districts as we do other meets,” Blackburn said. “The one significant difference is that place is more important than the actual mark at the district meet, so we compete with a slightly different mindset.”

With this extra mark, the pressure runners go through grows even further due to higher expectations. Caroline stevens, who runs relays, hurdles and triple jump, has to fight through the pressure and clear her mind before running relays.

‘I get really stressed before my events, especially the 4×800. Sometimes I can’t talk to my teammates when we’re warming up,” Stevens said. “To overcome nerves I try to visualize my race and take mental notes of how my legs feel and how I’m going to work through the pain. I try to clear my mind of any distracting thoughts.”

“I do get stressed out before meets because I want to perform well and I want to prep my body the days preceding a meet so I’m in the best conditions possible,” Banker said. “I also stress out about the weather a lot. As a pole vaulter I monitor things like temperature, wind and rain a week ahead, so I can prepare myself for the conditions mentally.”

With previous accolades at the districts meet, the bar is set high for varsity girls to compete at their best. While districts is not important as the two meets that follow it, sectionals and state, it is an important first round of competition that sets the stakes for the upcoming events.

“My hope is that the kids will perform up to their season potential and however that shakes out, we will be very happy with it. Our girls were third or fourth at districts a year ago and ended up defeating all of those teams once we got to the state championships and took fourth,” Blackburn said. “So the greater goal is for state, with districts being the first stepping stone.”