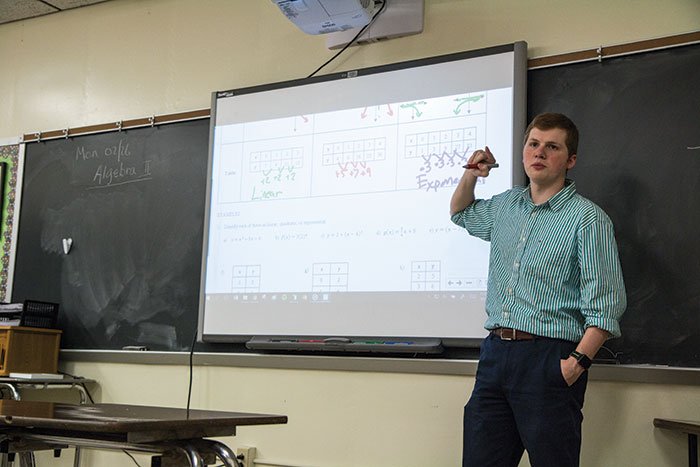 Adding up the knowledge: Math teacher Evan Thornberry works questions on the board in his Algebra 2 class Friday, April 27. Photo by Annalisa Geger.

[pullquote align=”right”]“I have made friendships that will continue long after I am no longer here. I know that even though I won’t be here next year, I’ll always be a Bruin.” -Barry Still[/pullquote]Next year, Still will go to teach in Brazil. To get to this point, Still, who spent his entire 10-year teaching career at RBHS, said he has worked with amazing students and colleagues, has learned how to teach and build good relationships and has created lasting memories from class. For instance, he vividly remembers when a student brought a hot air balloon for a project.

“The whole class went outside, and we got to watch him roll out and fill the balloon,” Still said. “We didn’t get to ride in it, but it was really cool to watch.”

Mathews originally taught in California but has loved the time he spent at RBHS during the last 12 years; he won’t move on from Columbia Public Schools, instead going to teach at Jefferson Middle School. No specific memory stood out to Mathews, but he loves the day-to-day interactions with his students.

“It’s been a very positive and rewarding experience,” Mathews said, “and I’ve thoroughly enjoyed watching the musical growth of the band.”

Although Cissi has only taught at RBHS for a year, this is her fourth year if one takes into consideration her student teaching. For her, the little things, like CoMo Cow and jokes with students and teachers have been her favorite moments, contributing to the difficulty of her decision to leave.

“The people at this school mean the world to me. It was a very emotional and difficult decision to make, but. . . St. Louis. . . is where I needed to be,” Cissi said. “I will be continuing my teaching career in St. Louis at Rockwood Summit High School. [However], I’ll always consider RBHS as a home.”

Like Cissi, Thornberry will teach in St. Louis next year, after two years at RBHS, which he said have made him feel like a valued member of the community even though he had no prior teaching experience when he started.

“Rock Bridge is the first and only school I have taught at, and it may have spoiled me for the rest of my career,” Thornberry said. “Rock Bridge has great students, teachers, administration and staff. For this and all of the countless memories I have, I cannot thank Rock Bridge enough.”

While these teachers will all leave RBHS when this school year ends, they will always have a place as important members of the RBHS community.

“I have made friendships that will continue long after I am no longer here,” Still said. “I know that even though I won’t be here next year, I’ll always be a Bruin.”

Retirees recount a lifetime of education