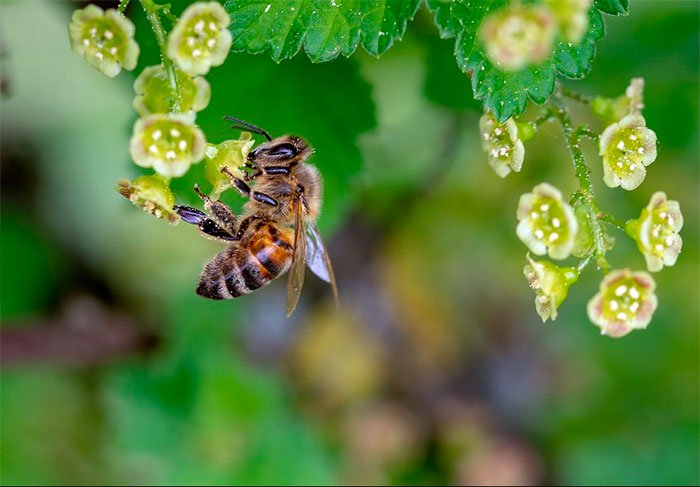 A bee lands on a flower to pollinate it. Photo by Myriams-Fotos.

[dropcap style=”flat” size=”3″]B[/dropcap]ees are crucial to our very existence and daily lives, but our actions are forcing the insects into extinction.

The Department of Etymology at Maryland reported between April 2015 and March 2016 beekeepers lost 44.1 percent of their colonies. Going back even further, since the end of WWII the global honeybee population has decreased by 2.5 million colonies, or over half. While shorter term population fluctuates, long term loss is a clear indicator. Even small rebounds in bee population are not enough to counteract the harm that has been done to the overall population, what’s needed is systematic change.

Bees do more than impact the economy, the crops they pollinate are crucial sources of food. Canadian environmental activist David Suzuki explains one third of every bite of food depends on bees, and if bees disappeared the effects on the human diet would be irreversible.

This loss of one third of our food will in turn lead to hunger and famine across the globe. According to Ishan Daftardar of the Don Bosco Institute Of Technology in Mumbai, “Less production of food crops will ultimately lead to worldwide famine. Hunger and poverty will be very common. Freshwater will start drying…[and] there will be less trees for water retention to occur. With less water and diminishing food, humans will die of thirst and starvation. Fertility would also suffer a setback, followed by a drop in the rate of reproduction. Ultimately, the global population wouldn’t be able to sustain and would be forced into extinction within a few hundred years.”

Therefore, something must be done to prevent this disastrous outcome. Luckily, because bees are dying because of human action, much of the harms we’re doing can be reversed. Sarah Fecht of Popular Science explains our replacement of naturally occuring wildflowers with plots of land for mass farming is reducing places for bees to collect nectar. Because of the increase in farming monocultures, coupled with a lack of wildflowers and rising urbanization, bees are left without ready access to food, significantly decreasing their ability to survive.

Even with the existing places for bees to pollinate, pesticides are negating the positive effects these flowers can have. Neonicotinoids, a type of insecticide resembling nicotine, is infiltrating flowers when used on farms, which slowly undermines bees. Roni Dengler of the University of Colorado writes, “Neonicotinoid pesticides commonly found in agricultural areas kill bees and hurt their ability to reproduce, two separate large-scale studies confirmed for the first…the new studies say the environmental levels of neonicotinoids surrounding farms do not obliterate bee colonies outright, but instead kill them over extended periods of time. The pesticides also threaten bee queens in particular — which means colonies have lower reproductive rates.”

Neonicotinoids are supposed to protect the plant from pests, but in the process they’re killing off the very pollinators keeping them alive in the first place. A pesticide is of no use if the plant can’t be pollinated and dies, and neonicotinoids are making that a reality. By elimination these harmful pesticides we could get rid of a counterproductive chemical, and a drag on the bee population.

Remedying these two practices, and planting pesticide free, bee friendly flowers could keep these crucial pollinators around. Every one of us can plant flowers that are bee friendly and avoid using any pesticides. Also, we can ensure that wildflowers don’t continue to be wiped out by farms, and strips of unused land such as along the end of a highway holds bee friendly plants.

While it seems small and simple, every person planting a plot of bee friendly flowers would snowball into a solution. Right now bees are stuck in food deserts, having to travel far and wide to find food, making them less likely to return especially when exposed to pesticides creating a drunk like effect. Putting out something as easy as a pot of flowers and not use pesticides, and working together can reverse the negative effects humans have on bees and revitalize their population.

By utilizing unused land, bees would have somewhere to collect nectar outside of the city, allowing bees in rural to not have to still undergo far travel for nectar, albeit pesticide free. Large stretches of land are full of wasted potential, sitting along the side of a highway, or airport, and could be put into better use for the bee population. It would harm no one to add bee friendly flowers, while giving bees access to pesticide free plants wherever they turn.